Smoke billows from explosion at chemical site in Leverkusen, Germany

Smoke is seen billowing from an explosion at an industrial park for chemical companies in Leverkusen, Germany, on July 27, 2021. Credit - Arzu Kara via Storyful

BERLIN - An explosion at an industrial park for chemical companies in Germany killed at least one person Tuesday, with 31 others injured and four missing. Fire officials who tested the air said there did not appear to be a danger to nearby residents after authorities initially urged people to shelter inside.

The explosion at the waste management facility of the Chempark site in the city of Leverkusen, near Cologne, sent a large black cloud into the air. It took firefighters almost four hours to extinguish the fire that took hold after the explosion.

Germany’s Federal Office for Civil Protection and Disaster Assistance initially classified the incident as "an extreme threat." Later on Tuesday, however, the Cologne fire department tweeted that measurements of the air's pollution "do not show any kind of abnormality." They said the smoke had gone down but that they would continue to measure the air for toxins.

The city of Leverkusen said in a statement that the explosion occurred in storage tanks for solvents. Police said Tuesday afternoon that 31 people were injured, with five of them in intensive care. They didn't give any details on their identities, the age of the dead person and the injured people because not all family members had been informed yet.

"We are deeply concerned about this tragic accident and the death of our employee," the head of Chempark, Lars Friedrich, told reporters in Leverkusen. "We are doing everything to get this situation under control as quickly as possible — we know that the people of Leverkusen are very concerned." 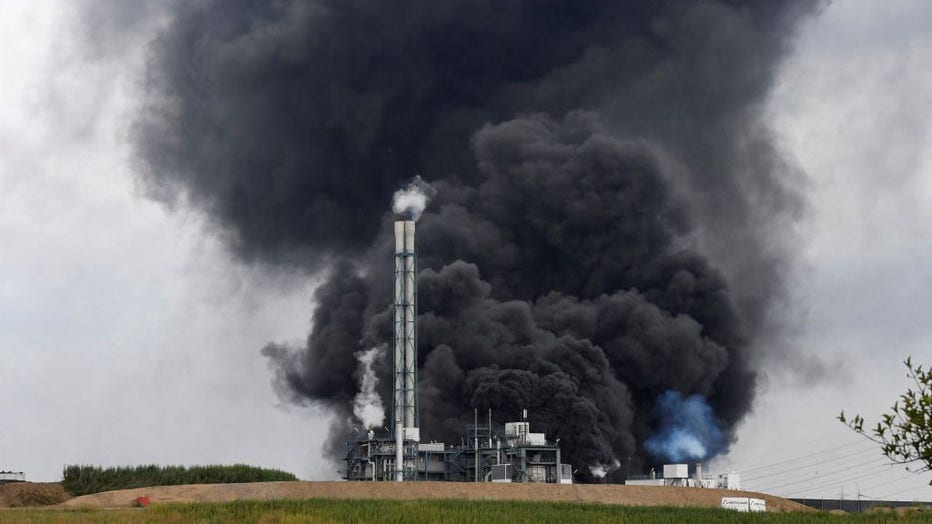 Smoke rises from a landfill and waste incineration area at the Chempark industrial park run by operator Currenta following an explosion in Leverkusen's Buerrig district, western Germany, on July 27, 2021. (Photo by ROBERTO PFEIL/afp/AFP via Getty Ima

City officials asked all residents to stay inside until the late afternoon and warned people from outside of Leverkusen to avoid the region. City officials later also warned people not to let children play outside, use outside pools or eat fruit and vegetables from their backyards in the coming days. They said experts would only be able to tell in a few days how toxic the soot of the explosion would be.

Currenta, the company operating the chemical park, said the explosion happened at 9:40 a.m. and then developed into a fire. They said three big tanks were affected by the explosion, but that it was too early to know the cause of the explosion.

"Sirens were operated to warn residents and warning alerts were sent," Currenta said in the statement.

Police in nearby Cologne said a large number of officers, firefighters, helicopters and ambulances from across the region had been deployed to the scene. They also shut down several nearby major highways for several hours.

Leverkusen is home to Bayer, one of Germany’s biggest chemical companies. It has about 163,000 residents and borders Cologne, which is Germany's fourth biggest city and has around 1 million inhabitants. Many residents work at Bayer, which is one of the biggest employers in the region.

The chemical park is located very close to the banks of the Rhine river.

Currenta has three facilities in the region. More than 70 different companies are based at the locations in Leverkusen, Dormagen and Krefeld-Uerdingen.

The mayor of Leverkusen, Uwe Richrath, called the blast "a tragic moment for Leverkusen."

"It was a huge detonation felt in all over the entire city," he said. "I hope the four missing people are still alive."