The bond between a mother and son is often unbreakable. In the case of Melanie and Matt Shaha, the bond was strengthened when the 23 year old grew out his hair to make a wig for his mom, who's been battling cancer. FOX 10's Anita Roman reports.

GILBERT, Ariz. - A moment of levity and gratitude between a mother and son over a wig.

"Seeing her in it, it's the first time I had seen my mom look like that since she lost it, so it's been about four years," Matt Shaha said.

For two and a half years, Matt grew out his hair after his mom lost hers. Out of six kids, his was the closest in color and texture.

"I have had a recurrent benign brain tumor, a pituitary tumor, and I've had surgery twice in 2003 and in 2006," Melanie Shaha said. "I was very surprised when my tumor returned in 2017 and I had radiation and radiation took my hair. I have not had any hair since Valentine's Day of 2018."

"It's a no-brainer," said Matt of donating his hair. "She gave me the hair in the first place."

"The day Matt cut his hair, Melanie says everyone cried tears of joy. She said she felt relief that she could feel like herself again.

"You know, I've lost my eyebrows, lost my eyelashes, I lost my hair, so it's just been such a tremendous gift to be able to have a more normal appearance, to go places and not stand out because you look unusual, but to fit in and be beautiful," Melanie said. "It's really great."

Matt also paid for the wig – it cost $2,000. There were certain regulations that had to be followed. They ultimately found a wigmaker in California who handstitched it so that it is lighter and more comfortable to wear. 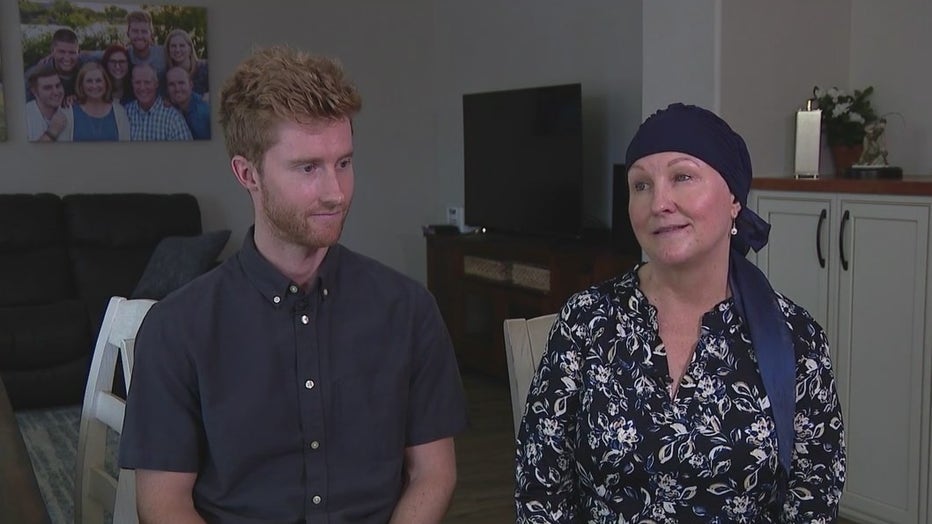