Samantha Parada and Arizona DPS trooper Christian Casillas reunited after he saved her life during a fiery crash on Loop 202 and 32nd Street in 2016. FOX 10's Bailey Miller reports.

PHOENIX - A woman and an Arizona Dept. of Public Safety trooper had a heartwarming reunion on Thursday after her life was saved during a bad crash five years ago.

Samantha Parada had been searching for the man who saved her life, but she had lost her memory after the collision and didn't have all the details. She went to DPS while she was in Phoenix for Christmas, and they found him.

Dec. 29 was the first time they talked on the phone, and on Thursday, she finally met with Trooper Christian Casillas.

"It was all through the phone call that I found out, and I immediately started crying once I hung up the phone," Casillas said. "It was pretty touching."

The accident happened back in 2012 on the Loop 202 freeway and 32nd Street. Casillas says Parada's car fell off the ramp, landing on its roof and eventually catching on fire.

Luckily, the trooper was around the corner and got her to safety with the help of firefighters.

Parada suffered from memory loss, rib fractures and other injuries as a result, but she survived and attributes it all to Trooper Casillas.

"I am really grateful something like that happened, and I was able to make an impact in her life at the time," Casillas said. "Within [the] last years of my career, I never thought I would do that to somebody."

Because of this second chance, she was able to become a mom, and that's why she named her son after her savior. Young Christian was able to meet his namesake during their reunion. 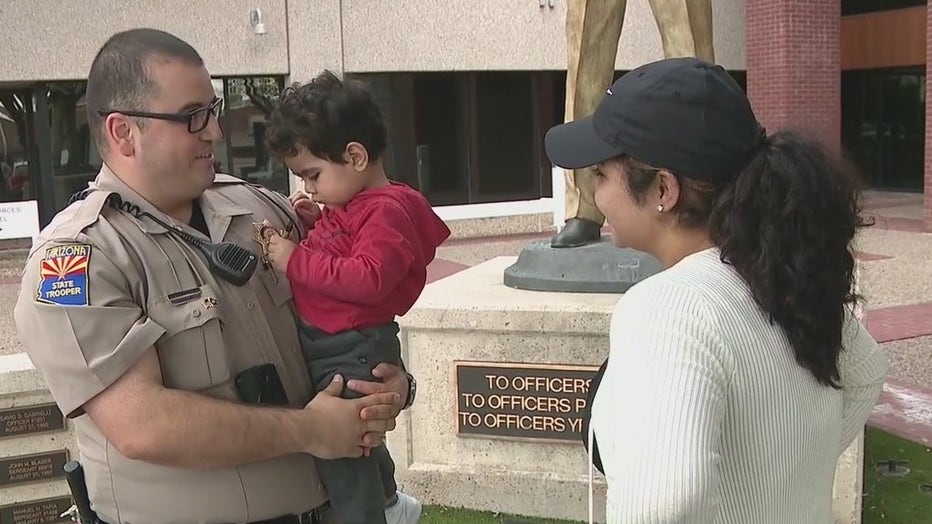 DPS officials say this kind of event almost never happens, so it meant a lot to them to meet Samantha.

As for Samantha and Christian, they say they will be staying in touch.