WASHINGTON - With the impeachment inquiry into President Donald Trump now in its second week of public hearings, the House Intelligence Committee heard testimony on Tuesday from top national security aides who listened in on Trump’s call with Ukraine and called it “improper” and “unusual” — while Republicans questioned one witnesses’ loyalty to the country.

Lt. Col. Alexander Vindman, an Army officer at the National Security Council, and Jennifer Williams, his counterpart at Vice President Mike Pence’s office, said they had concerns as Trump spoke on July 25 with the newly elected Ukraine president about political investigations into Joe Biden.

“I found the July 25th phone call unusual because, in contrast to other presidential calls I had observed, it involved discussion of what appeared to be a domestic political matter,” Williams said in opening remarks. 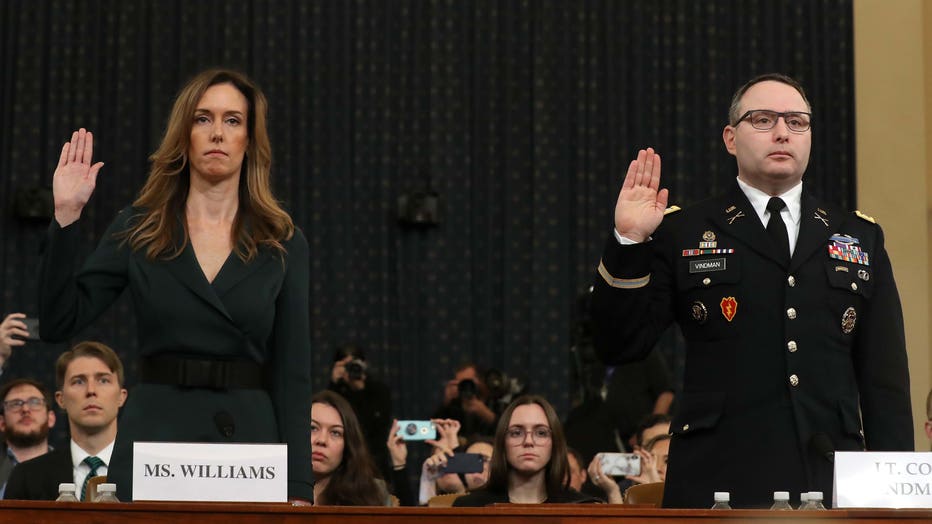 Vindman, a 20-year military officer who received a Purple Heart after being wounded in the Iraq War, said he reported his concerns “out of a sense of duty” and “because they had significant national security implications for our country.”

“What I heard was inappropriate,” Vindman told lawmakers.

Vindman, an immigrant from Ukraine who arrived in the United States as a toddler, told the panel in opening remarks that testifying before Congress would not be tolerated in many other countries. In Russia, for example, his “act of expressing my concerns to the chain of command in an official and private channel” would have cost him his life.

He added that he is grateful his father came to the U.S. some 40 years ago, a place “where I can live free of fear for mine and my family’s safety.”

In the audience was his twin brother, also an official at the National Security Council and among those he told about his concerns over Trump’s phone call.

Addressing his late father, he said, “Do not worry, I will be fine for telling the truth.”

Yet Vindman spent long stretches fielding Republican attacks on his loyalty to the U.S. and his career in public service. The Republicans’ lead counsel asked at one point about an offer to Vindman from a Ukrainian official to become the country’s defense minister.

Vindman called it “comical” and said he swiftly reported it up his chain of command.

“I’m an American,” Vindman said. “And I immediately dismissed these offers.”

In total, nine current and former U.S. officials will testify over the next three days as the House’s historic impeachment inquiry accelerates and deepens. Those appearing in public have already given closed-door interviews to investigators, and transcripts from those depositions have largely been released.

RELATED: Impeachment hearings: Who is testifying next and when

Democrats say Trump demanded that Ukraine investigate his Democratic rivals in return for U.S. military aid it needed to resist Russian aggression and that may be grounds for removing the 45th president.

Trump says he did no such thing in his call with President Volodymyr Zelenskiy and the Democrats just want him gone. At the White House, he called it a “kangaroo court” as Tuesday’s hearing was underway.

Gaveling open the live televised hearings, the Democratic chairman leading the probe, Rep. Adam Schiff, noted that Trump tweeted against Williams over the weekend and Vindman has seen “far more scurrilous attacks” on his character by the president’s allies.

Schiff, who has warned that the president’s attacks on others in the impeachment inquiry could be seen as intimidation, said the witnesses “are here because they were subpoenaed to appear, not because they are for or against impeachment. That question is for Congress.”

Trump previously called Vindman a “Never Trumper” after he appeared in a closed-door deposition. When asked about the tweet, Vindman responded: "Representative, I'd call myself a never partisan."

The top Republican on the House Intelligence Committee, Rep. David Nunes, swiftly turned to trying to prompt the witnesses to name the still-anonymous whistleblower whose complaint about the phone call led the House to launch the impeachment inquiry.

Nunes asked the witnesses who else they talked to about their concerns, bearing down once Vindman acknowledged one was from the intelligence community.

“I do not know who the whistleblower is,” Vindman said. He has previously said it is not him.

Nunes pressed: “You can plead the fifth, but you’re here to answer questions.”

“These proceedings will not be used to out the whistleblower,” Schiff said.

Williams testified the call was unlike about a dozen others she had heard from presidents over her career. Vindman, an Iraq war veteran, said Trump’s remarks strayed from the talking points prepared for the president.

“Without hesitation, I knew I had to report this,” Vindman testified. “It was inappropriate, it was improper for the president to demand an investigation into a political opponent.”

Both noted the use of the word “Burisma” on the call, a reference to the gas company in Ukraine where Hunter Biden served on the board. They both said Zelenskiy had mentioned it on the call, but testified it was missing from the rough transcript released by the White House.

Vindman said the uneven power dynamic between the presidents of the East European ally and the U.S. made the demand obvious.

“The culture I come from, the military culture, when a senior asks you to do something, even if it’s polite and pleasant, it’s not to be taken as a request, it’s to be taken as an order,” Vindman said.

It wasn’t the first time Vindman was alarmed over the administration’s push to have Ukraine investigate Democrats, he testified.

Earlier, during an unsettling July 10 meeting at the White House, Ambassador Gordon Sondland told visiting Ukraine officials that they would need to “deliver” before next steps, which was a meeting Zelenskiy wanted with Trump, the officer testified.

“He was talking about the 2016 elections and an investigation into the Bidens and Burisma,” Vindman testified.

"The Ukrainians would have to deliver an investigation into the Bidens," he said. "There was no ambiguity.“

On both occasions, Vindman said he took his concerns about the shifting Ukraine policy to the lead counsel at the NSC, John Eisenberg. 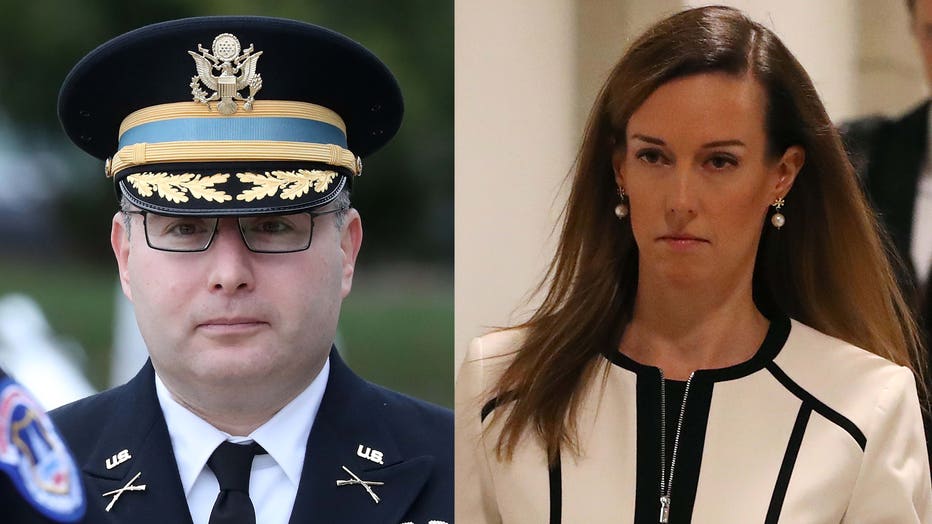 Lt. Col. Alexander Vindman, an Army officer at the National Security Council, and Jennifer Williams, his counterpart at Vice President Mike Pence’s office, are pictured arriving for closed-door depositions as part of the impeachment inquiry against P

Williams said she put a copy of the call’s rough transcript in the vice president’s briefing materials. “I just don’t know if he read it,” Williams testified earlier in her closed-door House interview.

Pence’s role throughout the impeachment inquiry has been unclear, and the vice president’s aide was questioned by lawmakers looking for answers.

Sondland is set to testify Wednesday. Others have testified that he was part of a shadow diplomatic effort with the president’s personal lawyer, Rudy Guiliani, outside of official channels that raised alarms.

Sondland, a wealthy hotelier who donated $1 million to Trump’s inauguration, is the only person interviewed to date who had direct conversations with the president about the Ukraine situation.

In addition to Sondland, the committee will hear on Wednesday from Laura Cooper, a deputy assistant secretary at the Department of Defense, and David Hale, the undersecretary of state for political affairs.

On Thursday, Fiona Hill, a former Russia adviser to the White House, and David Holmes, a political counsel at the U.S. Embassy in Ukraine.

Associated Press reporters Lisa Mascaro and Clare Jalonick contributed to this report. This story was reported from Cincinnati.