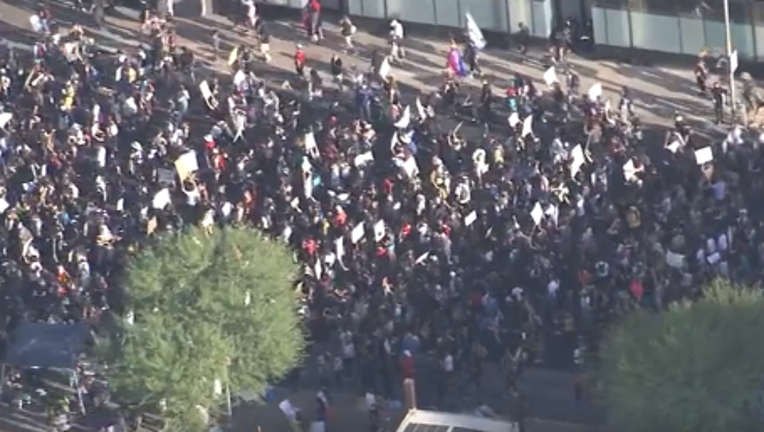 PHOENIX (AP) - Despite an estimated 3,000 people attending the 10th consecutive evening of protests against racism and police brutality in Phoenix, authorities say no arrests were made.

Saturday marked the sixth straight night without arrests of any demonstrators.

As the march proceeded, protesters made stops throughout downtown Phoenix including an eight-minute and 46-second silent protest that had many people getting face-down on the concrete.

That signified the length of time a former Minneapolis officer is accused of holding his knee on George Floyd’s neck before Floyd died.

Protesters in Phoenix also decry the death of 28-year-old Dion Johnson, who was fatally shot by an Arizona Department of Public Safety trooper on Memorial Day.

The crowd had dispersed by the 8 p.m. curfew.

Organizers say they plan to continue protesting every day until they see change in Phoenix and in Arizona as whole.

Protests also were held Saturday night in Tucson and Gilbert.

In Tucson, protesters briefly entered Interstate 10 but there were no immediate reports of any arrests.

In Gilbert, protesters marched from the downtown area to the police station with some officers kneeling with the demonstrators.