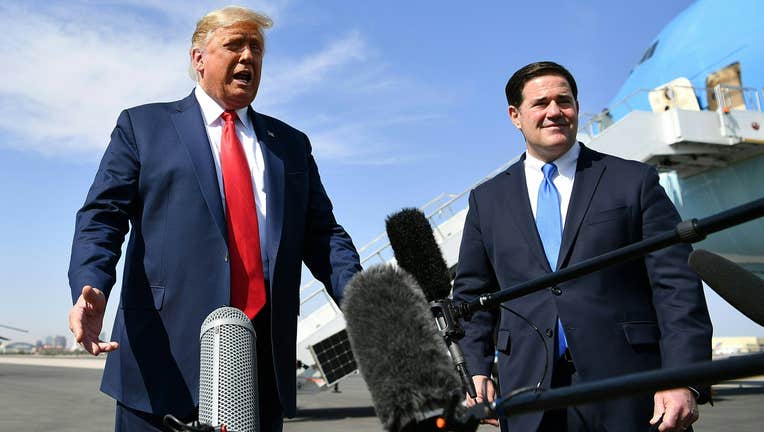 US President Donald Trump speaks to members of the media as Governor of Arizona Doug Ducey (R) looks on, upon arrival at Phoenix Sky Harbor International Airport in Phoenix, Arizona on October 19, 2020. (Photo by MANDEL NGAN / AFP)

PHOENIX - Arizona Gov. Doug Ducey spent much of Donald Trump’s presidency trying not to provoke a confrontation with the president or his fervent defenders. He almost made it through.

But when state law required Ducey to certify Arizona’s presidential election results and sign off on Trump’s defeat last week, four years of loyalty wasn’t enough to protect him from the president. “Republicans will long remember!” Trump tweeted in anger at the governor.

Since then, the episode has spiraled into a public and politically damaging dispute between Ducey and influential Trump loyalists in his own party. Those who believe Trump’s unproven claims of fraud and support his effort to undermine the will of voters say Ducey betrayed his party. His defenders have dismissed the critics as “nuts.”

The rift may be a preview the lasting political impact of Trump’s campaign to subvert the election results. As the president’s baseless claims gain traction with many GOP voters, Republican officeholders will be asked to take sides — back Trump or acknowledge the reality that Biden won an election with no proven claims of widespread fraud. Their choices could have long-term consequences for their own political futures.

“He’s in a no-win situation on many fronts,” said Doug Cole, a Republican political consultant and adviser to past governors, of Ducey, who is widely believed to be eying a bid for Senate or even the White House.

Ducey is one of two GOP governors who have faced Trump backlash after certifying Biden’s win in their states. GOP Gov. Brian Kemp of Georgia also signed off on Trump’s loss and refused to endorse Trump’s attempts overturn the results. Trump has lashed out in response.

But many other GOP governors and lawmakers have dodged questions about whether Biden is the winner, with some suggesting they’re waiting until Jan. 6, when Congress is due to approve the Electoral College vote.

It didn’t take long for Ducey to find himself at the center of a schism. Trump called Ducey while the governor was in the process of signing the certification of Arizona’s election results in front of television cameras. The governor quickly pulled his phone from his suit jacket as it played the presidential anthem, “Hail to the Chief,” silenced it and set it on the table. He later returned Trump’s call but declined to tell reporters what they discussed.

Since election results in Arizona have been certified, several Republican leaders have taken jabs at Gov. Doug Ducey on Twitter, including President Donald Trump.

Hours after, Trump began his tirade against Ducey on Twitter, which seemed to open the floodgates for his staunchest supporters.

Kelli Ward, the firebrand chair of the Arizona Republican Party said she was “disgusted” with Ducey and addressed him on Twitter with an acronym meaning “shut the hell up.”

Ducey clapped back in a news conference: “The feeling’s mutual...Practice what you preach.”

Ducey’s advisers opened up on the governor’s critics on Twitter. His chief of staff, Daniel Scarpinato, called Rep. Andy Biggs, an Arizona Republican who leads the conservative Freedom Caucus, “nuts” and “a permanent resident of Crazytown.” Ducey’s former chief of staff, Kirk Adams, asked a state lawmaker who’s pushing to overturn the election results, “Have you considered counseling? It can help.”

“Donald Trump’s tweets come and go,” said Marson, who previously worked for a Ducey-aligned political action committee to elect Republican legislators. “The governor has been a supporter of the president’s agenda, his economic policies and so forth. This one hiccup won’t fray that relationship going forward.”

After avoiding Trump during the 2016 campaign, Ducey came to embrace him, even when Trump’s policies were problematic for Ducey’s allies in the Arizona business community. When Trump would muse about closing the southern border, a potentially devastating move in a state with strong economic ties with Mexico, Ducey backed him.

And as Arizona became a pivotal swing state in the 2020 contest and Trump made constant visits, Ducey was always by his side with effusive praise. The president returned the favor by touting Ducey’s handling of the coronavirus, which he called a model for other states.

But he also warned just days before the election that his support would only go so far.

“We’re doing well Doug? We’re doing good?” Trump said at a rally in conservative Bullhead City. “I’m gonna be so angry at you Doug if I don’t get there.”

Since Biden’s narrow victory in Arizona, Ducey has never lent credence to the conspiracy theories lobbed by the president, his attorneys and allies alleging fraud. Still, he waited three weeks before acknowledging Biden’s victory, which he did only when pressed repeatedly by an interviewer. He’s challenged those questioning the election results to present their evidence in court.

Ducey’s estrangement from portions of his party base began earlier this year when he ordered the closure of businesses to preserve hospital capacity and protective gear as the spread of the coronavirus intensified. But he maintained the president’s strong backing until now.

Barred by term limits from running again for governor, Ducey faces a crossroads in his political future. Observers in Arizona have long speculated on what he wants to do next. Trump’s loss deprives him of the chance to seek an administration job in Washington.

He could run for the U.S. Senate against newly elected Democrat Mark Kelly but would almost certainly face a primary challenge from the right, especially if his relationship with Trump remains strained.

“Short term, we know that when the president sours on anyone ... there’s a group of Republicans out there that, wherever the president goes, they will go,” said Mike Noble, a Phoenix pollster and former GOP political consultant. “The question is going to be whether or not those folks stick to that.”

A reply to an AZ GOP tweet says "I am willing to give my life for this fight" and some fear it could incite violence. FOX 10's Linda Williams reports.