Just in time for Thanksgiving, parts of Northern Arizona prepares for winter storm

The Arizona Department of Transportation says Interstate 17 for 40 miles south of Flagstaff and Interstate 40 for 185 miles between Winslow on the east and U.S. 93 on the west likely will be closed until the snowfall lets up and the routes can be plowed.

According to the agency, "ADOT works closely with the Arizona Department of Public Safety to ensure safety during winter weather. With the National Weather Service advising that “travel may be very difficult to impossible” at the height of the storm, which the latest forecast says will be between Thursday afternoon and Friday morning, the agencies have determined that the safest course of action is closing highways with blizzard conditions until snow lets up and ADOT’s plows can clear roadways."

The department also said Wednesday that additional highway closures also may be necessary.

The National Weather Service forecasts that Flagstaff will receive up to 2 feet of snow from the storm in areas above 6,000 feet in elevation and hazardous driving conditions down to 4,500 feet, including much of Yavapai County, the Mogollon Rim and the Grand Canyon. 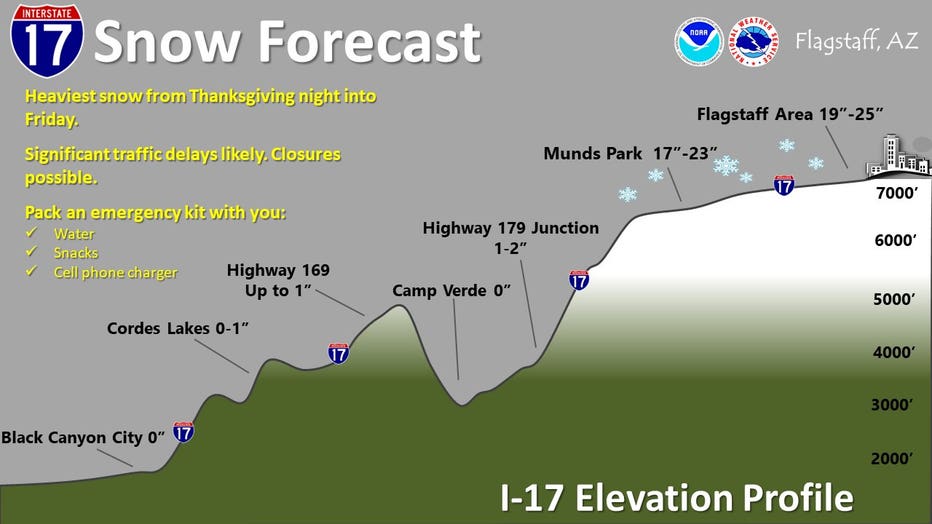 A look at the expected snow totals along the Interstate 17 in northern Arizona for Nov. 28 and 29, 2019. (NWS Flagstaff)

As for the City of Flagstaff, snow is nothing new, and crews will be equipped with 20 ten-wheel snowplows, as well as nine road graders.

Overton said there are 35 workers on deck, and up to 16 will work 12-hour shifts. They will focus on main street and arterial roads.

Overton said snowfall last week has given crews a warm-up for the event.

"A lot of these operators are veteran operators who have been with us for a long time," said Overton. "We have a couple of new guys on the routes, but they’ve been training. They've been going through simulations and driving the routes and being most prepared as possible."

Track your local forecast for the Phoenix metro area quickly with the FREE FOX 10 Weather app available for Apple and Android devices:
https://fox10phoenix.com/mobile.