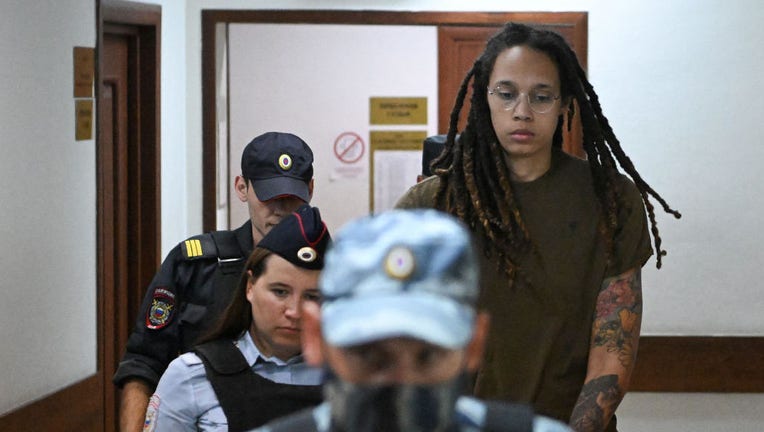 US basketball player Brittney Griner (R) is escorted by police before a hearing during her trial on charges of drug smuggling, in Khimki, outside Moscow on Aug. 2, 2022. (Photo by NATALIA KOLESNIKOVA/AFP via Getty Images)

Griner, a center for the Phoenix Mercury and a two-time Olympic gold medalist, was convicted on Aug. 4. She was arrested in February at Moscow's Sheremetyevo Airport after vape canisters containing cannabis oil were found in her luggage.

Griner played for a women's basketball team in Yekaterinburg during the WNBA offseason.

Lawyer Maria Blagovolina was quoted by Russian news agencies on Monday as saying the appeal was filed, but the grounds of the appeal weren't immediately clear.

MOSCOW - U.S. basketball star Brittney Griner was convicted Thursday in Russia of drug possession and sentenced to nine years in prison following a politically charged trial that came amid soaring tensions between Moscow and Washington over Ukraine and could lead to a high-stakes prisoner exchange between the two world powers. The 31-year-old Griner, a two-time U.S. Olympic champion and a eight-time all-star with the WNBA’s Phoenix Mercury listened with a blank expression as an interpreter translated the verdict by Judge Anna Sotnikova. The judge also fined 1 million rubles (about $16,700) fine.

Blagovolina and co-counsel Alexander Boykov said after the conviction that the sentence was excessive and that in similar cases defendants have received an average sentence of about five years, with about a third of them granted parole.

Griner admitted that she had the canisters in her luggage, but said she had inadvertently packed them in haste and that she had no criminal intent. Her defense team presented written statements that she had been prescribed cannabis to treat pain.

Before her conviction, the U.S. State Department declared Griner to be "wrongfully detained."

Secretary of State Antony Blinken took the unusual step of revealing publicly in July that the U.S. had made a "substantial proposal" to get Griner home, along with Paul Whelan, an American serving a 16-year sentence in Russia for espionage.

RELATED: What will it take to get Brittney Griner home?

Blinken didn't elaborate, but The Associated Press and other news organizations have reported that Washington has offered to free Viktor Bout, a Russian arms dealer who is serving a 25-year sentence in the U.S. and once earned the nickname the "Merchant of Death."

On Sunday, a senior Russian diplomat said exchange talks have been conducted.

"This quite sensitive issue of the swap of convicted Russian and U.S. citizens is being discussed through the channels defined by our presidents," Alexander Darchiev, head of the Foreign Ministry’s North America department, told state news agency Tass. "These individuals are, indeed, being discussed. The Russian side has long been seeking the release of Viktor Bout. The details should be left to professionals, proceeding from the ‘do not harm’ principle.'"