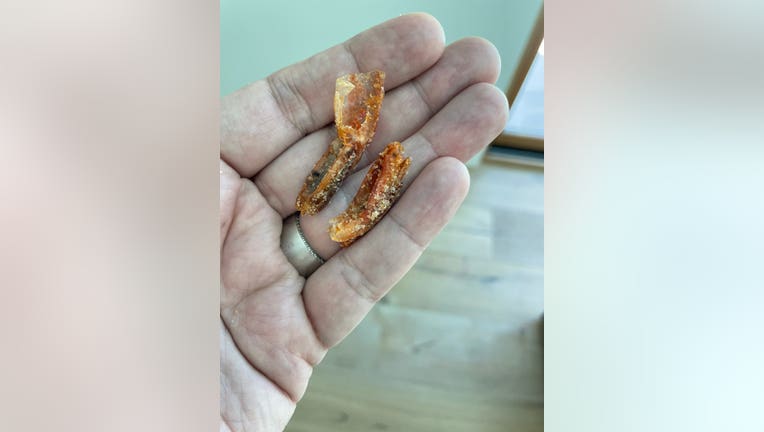 Jensen Karp said he found what appeared to be dehydrated shrimp tails inside a box of Cinnamon Toast Crunch cereal. (Credit: Jensen Karp)

LOS ANGELES - Comedian Jensen Karp wasn’t happy that a surprise inside a box of Cinnamon Toast Crunch cereal wasn’t a toy, but what appeared to be dehydrated shrimp tails.

"I thought it had something to do with me," Karp, 41, told The Washington Post, swearing that his claim wasn’t some Twitter prank. "Then when I looked back into the box and saw another one, I was like, ‘This is bonkers!’ I thought it was sort of funny. I kind of thought of it as Twitter fodder, or whatever, for a second."

According to the outlet, Karp bought the cereal from a Costco on Saturday and opened the box on Monday.

Karp, who is also a writer, actor and podcast host, claimed on Twitter that after he discovered the alleged shrimp tails, he found some squares with dark markings, a string and other unknown substances at the bottom of an apparent taped-up cereal bag.

"I get really grossed out, and I’m medicated for O.C.D., so this is a total nightmare for me," he told The New York Times, adding that he’s not suffering from any physical symptoms.

He took to Twitter to talk about his breakfast bewilderment, sparking a social media feud with the company.

"Why are there shrimp tails in my cereal? (This is not a bit)," Karp tweeted on Monday.

The cereal brand tweeted back at Karp, at first questioning whether what he’d discovered were actually shrimp tails.

"After further investigation with our team that closely examined the image, it appears to be an accumulation of the cinnamon sugar that sometimes can occur when ingredients aren't thoroughly blended," the cereal company later responded. "We assure you that there's no possibility of cross contamination with shrimp."

"Ok, we’ll after further investigation with my eyes, these are cinnamon coated SHRIMP TAILS, you weirdos. I wasn’t all that mad until you now tried to gaslight me?" he sharply replied to the company’s tweet.

The cereal brand later tweeted again, saying the company was looking into the incident and assuring consumers that the foreign objects could not have made their way into the Cinnamon Toast Crunch box from a General Mills facility.

"While we are still investigating this matter, we can say with confidence that this did not occur at our facility," the company tweeted.

Karp’s latest tweet showed a screenshot with a new response from the company, suggesting that if he doesn’t want to send the cereal back, he could take it to the local police as a possible case of product tampering.

Karp declined to take the cereal box to police, suggesting that officers may not take him seriously.

On Tuesday, Karp posted that General Mills sent an envelope for him to send back the substances he found in the cereal. He also sent pieces to the National History Museum of Los Angeles County for testing.

"Waiting for the envelope I agreed on from General Mills to send them back pieces," he wrote on Twitter.

"While we are still investigating this matter, we can say with confidence that this did not occur at our facility," Spokesperson Mike Siemienas told FOX Television Stations. "We are waiting for the consumer to send us the package to investigate further. Any consumers who notice their cereal box or bag has been tampered with, such as the clear tape that was found in this case, should contact us."

Health officials said it is impossible to keep food free from contaminants. The U.S. Food and Drug Administration created a chart to "to establish maximum levels of natural or unavoidable defects in foods for human use that present no health hazard." The FDA said it established the levels "because it is economically impractical to grow, harvest, or process raw products that are totally free of non-hazardous, naturally occurring, unavoidable defects."

However, FDA officials said their guidelines do not absolve companies of their responsibility to have quality manufacturing processes.