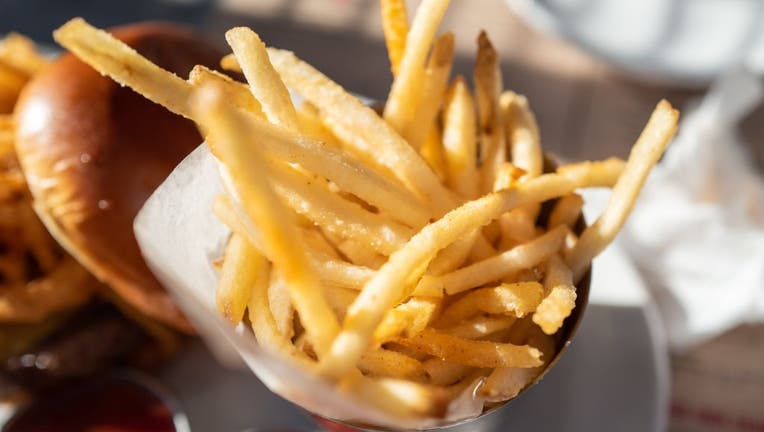 FILE - French fries are seen at a restaurant in the Silicon Valley, San Jose, California, on Dec. 18, 2021. (Photo by Gado/Getty Images)

National French Fry Day is a time to celebrate everyone’s favorite side item.

Whether you prefer them with ketchup, vinegar, or even cheese — there’s something for all to enjoy. Beyond the condiments, these deep-fried potatoes can also come in unusual shapes like curly fries, waffle fries, and crinkle fries.

Here’s a look at the day to celebrate all things French fries, and some of the best discounts and freebies being offered, including free orders at McDonald's and Wendy’s.

When is National French Fry Day?

National French Fry Day 2022 is on Wednesday, July 13, when fans are encouraged to enjoy their favorite fries.

As it turns out, French fries may not actually be French. A common claim states that the fry originated in Belgium, where locals along the River Meuse traditionally ate fried fish, Albert Verdeyen, chef and co-author of a book charting the history of the fry, told the BBC.

When the river froze over one cold winter in 1680, people began eating fried potatoes instead of fish — and the fry was born, Verdeyen told the outlet. Common lore states that American soldiers in Belgium during World War I discovered the fried potato dish and called it "French" fries, since the dominant language of the region is French.

But some food historians dispute this story, noting how fat was a luxury for those of limited means and the use of it to deep-fry potatoes seems suspect, according to the BBC.

Others have made the French claim that the delicacy’s first form was the pomme Pont-Neuf, a deep-fried potato sold by vendors on Paris’ oldest bridge, the eponymous Pont Neuf, in the late 18th Century, the news outlet reported.

Looking back at written references, it’s also difficult to discern between deep-fried lengths of potato, or rounds sautéed in a pan with butter, the BBC notes.

And so, the true origins of the food seem to remain unknown.

Rideshare driver travels to all 50 states to try local food, learn about America

Kreskin Torres, a 33-year-old Army veteran, kicked off his adventure in Los Angeles, California, and since then, he has visited 49 states. Soon, he will fly to Honolulu, Hawaii, and rent a car to achieve his 50-state milestone.

McDonald’s: On Wednesday, July 13, McDonald’s is celebrating National French Fry Day by offering an order of free large fries all day long — with no purchase necessary. Customers must order through the McDonald’s app.

Wendy’s: The fast-food chain is declaring a "hot and crispy summer" and turning National French Fry Day into Fry Week. Wendy’s has deals every day between July 11-July 15, including a free medium fry with any salad mobile order purchase via the Wendy’s app on July 12. The chain is also offering a free any-size fry on Wednesday with any purchase on the mobile app, and a free small breakfast potatoes order with any mobile app purchase on Thursday. On Friday, customers can get a free medium fry with any size fry order on the app.

Checkers & Rally’s: The restaurant chains believe "Fry Day" should always be on a Friday, so they’re asking customers to visit FryDaytoFriday.com to sign a petition in support of this "universal fry love and support" movement. Anyone who signs the petition will receive a digital coupon valid for a free medium order of Checkers & Rally's seasoned fries — no purchase necessary. The offer is redeemable through Friday, July 15.

Burger King: Burger King previously announced that the chain is giving away free French fries every single week this year to those who join its Royal Perks benefit program and purchase anything else on the menu.