Track Santa's journey across the world

Fans of the NORAD Tracks Santa program will be able to get updates on Old Saint Nick’s whereabouts.

NORAD announced it’ll kick off its 67th annual Christmas tradition with a promotional video it shared on the agency’s official NORAD Tracks Santa social media accounts, which include Facebook, Instagram and YouTube.

Fans of the NORAD Tracks Santa program will be able to get updates on Old Saint Nick’s whereabouts on noradsanta.org.

HOW TALL IS SANTA CLAUS? HERE’S HOW TO ANSWER THAT QUESTION FOR KIDS

In October, NORAD Tracks Santa published an interview with the program’s manager, Lt. Sean Carter, to provide fans with a behind-the-scenes look at the Christmas tradition.

"It’s no exaggeration to say that there is at least some form of Santa planning going on every month of the year," Carter said. "Things really start to ramp up around September and into October, taking full flight by November and throughout December leading up to the big day."

"But even afterwards, there’s room for lessons-learned meetings, compiling after-action reports to pass down to future generations of Santa trackers, brainstorming for ways to improve processes, and, of course, thanking our sponsors and volunteers, without whom the program would not be possible," he continued. 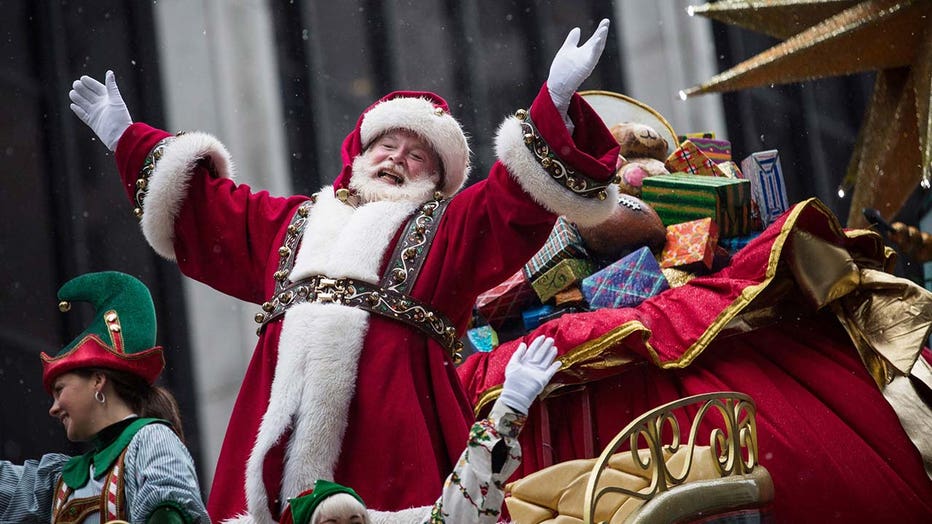 Santa Claus waves to the crowd during the Macy's Thanksgiving Day Parade on November 27, 2014 in New York City. The annual tradition marks the start of the holiday season. (Photo by Andrew Burton/Getty Images)

Call centers are set up in Colorado Springs, Colo. – the city where the tradition was born – with Department of Defense personnel, families, civic leaders and community members volunteering their time to take phone calls from children and adults who want to know what Santa is up to, Carter explained.

NORAD Santa Tracker volunteers accept calls from around the globe, and they work in 10 two-hour shifts that run from 4 a.m. through 12 a.m. MST.

The NORAD Santa Tracker website supports eight languages and emails can be sent to noradtrackssanta@outlook.com.

NORAD reportedly got its Santa tracking start in 1955 when a young child tried to call him after seeing a misprinted department store ad from a local newspaper.

"Air Force Col. Harry Shoup, the commander on duty that night who answered the child’s phone call, was quick to realize a mistake had been made and assured the child he was Santa," NORAD continued.

A duty officer was assigned to answer Santa calls when an influx of children called the agency in search of Santa, and the tradition reportedly continued when CONAD became NORAD in 1958.

Other workers at NORAD who aren’t involved in Santa tracking are tasked with defending North America by tracking everything that flies in and around the U.S. and Canada.

Santa tracking gets special attention on Christmas Eve with an animated Santa’s geolocation depicted on the NORAD Santa Tracker website.

For more updates go to FOXNews.com.