The box truck driver, identified as 57-year-old Dewey Sigler, was arrested and booked into jail upon being released from the hospital. He is accused of manslaughter. FOX 10's Marissa Sarbak reports.

SURPRISE, Ariz. - A driver was arrested following a deadly multi-vehicle crash that closed Grand Avenue in both directions in Surprise.

According to Bart Graves of the Arizona Department of Public Safety, the crash happened at 11:03 a.m. on Apr. 4 in the southbound lanes of U.S. 60 (Grand Avenue), at 163rd Avenue.

"A Penske box truck collided with a Toyota passenger vehicle injuring two people inside the vehicle. The force of the impact pushed the Toyota sedan into the desert. The truck then struck a Nissan Altima sedan killing the lone driver. A semi truck then came along and struck the Penske box truck," said Graves. 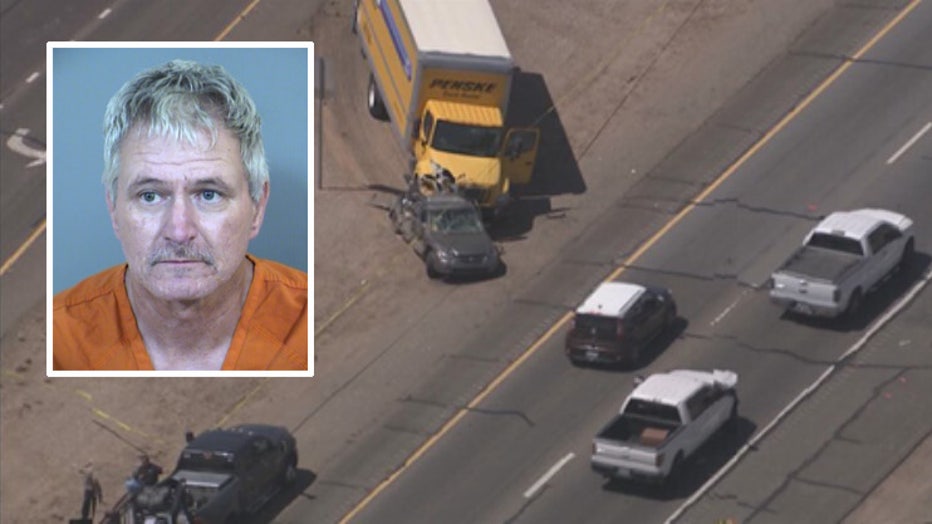 Dewey Sigler, 57, was arrested in connection to a four-vehicle crash on Grand Avenue that left one person dead in Surprise.

The type of injuries regarding the occupants of the Toyota are not known at this time.

The crash closed portion of Grand Avenue for hours, leaving some motorists stranded.

"I’ve been out here for an hour. I’m trying to get my son from school, and I’m stuck," said Denise Aranda.

In court documents we obtained, the suspect is identified as 57-year-old Dewey Franklin Sigler.

Sigler, according to investigators, was arrested at the scene, but he later complained of a possible heart attack, and was taken to Banner Thunderbird Medical Center.

Sigler reportedly displayed erratic behavior while at the hospital and a toxicology report showed a presumptive positive for methamphetamine in Sigler's urine. Blood and drug tests for Sigler are still pending.

Investigators say Sigler was booked into jail upon being released from the hospital. He is accused of manslaughter and drug charges. He is being held on a $500,000 bond.

A deadly crash involving three vehicles closed Grand Avenue in both directions in Surprise on April 4.