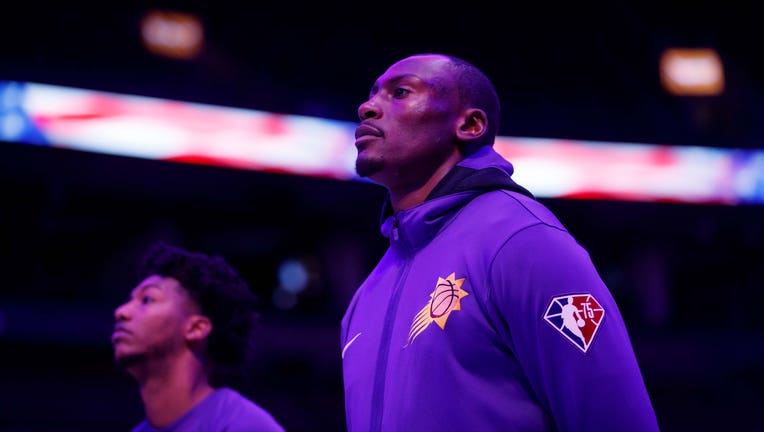 TORONTO, ON - JANUARY 11: Bismack Biyombo #18 of the Phoenix Suns, stands for the American national anthem ahead of their NBA game against the Toronto Raptors at Scotiabank Arena on January 11, 2022 in Toronto, Canada. (Photo by Cole Burston/Getty Images)

VATICAN CITY - Pope Francis may have canceled his planned trip to Congo because of his bad knee, but he had a visit Tuesday from one of Congo’s brightest basketball stars who briefed him on his humanitarian efforts back home.

The Phoenix Suns’ Bismack Biyombo had a private audience with Francis at the Vatican hotel where the pontiff lives. The 6-foot-9 Biyombo towered over the Argentine pope, even as he stood for photos.

Francis, 85, has been using a wheelchair to get around after straining ligaments in his right knee. He had to postpone a planned July 2-7 visit to Congo and South Sudan because doctors said the trip would jeopardize his therapy.

Biyombo said the Congolese people were patient and knew he would eventually come.

"If he is not feeling good he can’t get on a plane," Biyombo told The Associated Press in St. Peter’s Square after the audience. "I think if he wouldn’t go to Congo, I will bring the Congo to him," he said, laughing.

The center, who has played 11 NBA seasons with the Suns, Charlotte Hornets, Orlando Magic and Toronto Raptors, briefed Francis on his foundation, which began by teaching Congolese children basketball, then providing them scholarships, refurbishing schools and hospitals, and building a hospital in honor of his late father.

"Just being able to be in the presence of the pope I think it’s a blessing," he said. "I wish I could have brought my mum here but she’s absolutely happy that I got to be able to do that and to get the pope’s blessing."