Ukrainian refugees fleeing to Medyka, Poland, were greeted with live music, as a man played the piano near the border crossing on March 4. (Credit: Daniel Baird via Storyful)

Ukrainian refugees entering Poland were treated to a real-life piano man as beautiful music was being played at the border crossing on March 4.

Daniel Baird recorded video showing people walking along a road in Medyka, Poland as refugees from Ukraine continued to arrive on buses.

In the background of the video, beautiful music being played on a piano could be heard while people carried their suitcases to seek asylum in Poland. 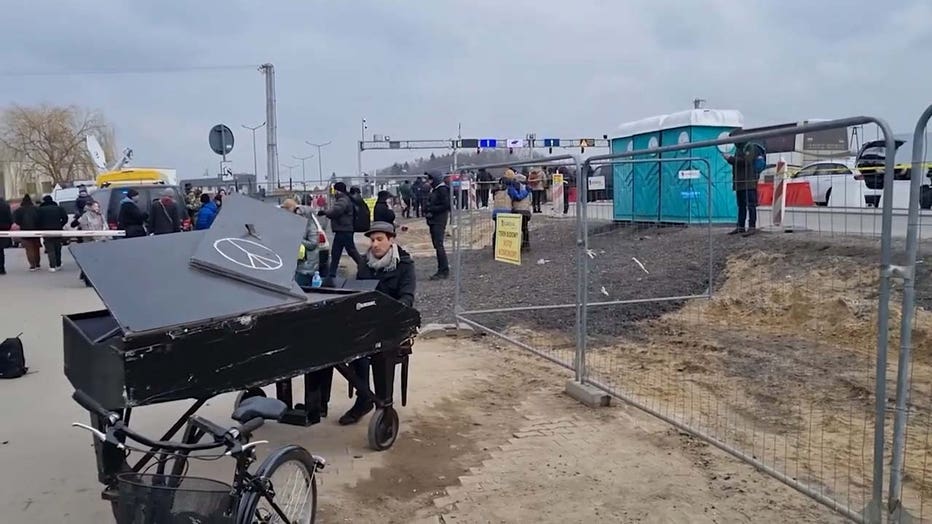 A man who appeared to have brought the piano attached to a bicycle nearby is shown briefly in the video playing on a piano with a peace sign painted on it.

As Russia’s war on Ukraine continues, U.N. and Ukrainian officials said no radiation was released from a Russian attack at Europe’s biggest nuclear power plant in Ukraine and firefighters have extinguished a blaze at the facility.

Russian forces continued to press a campaign that has brought global condemnation. People across Ukraine have taken up arms and sought shelter. More than 1.2 million people have fled to neighboring countries, the U.N. refugee agency said Friday.