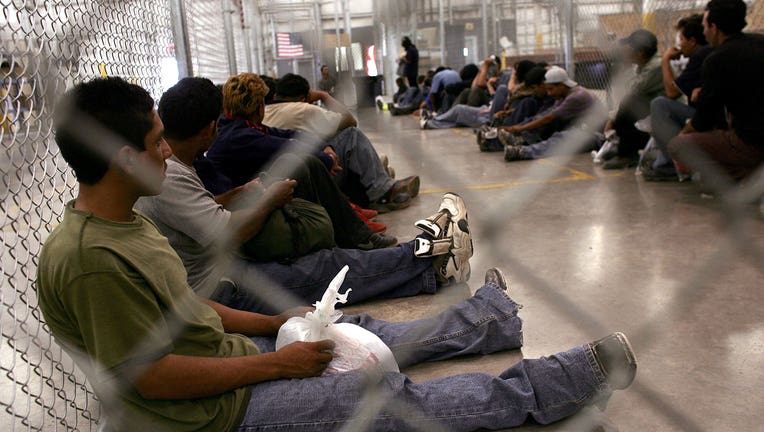 Men who were caught crossing the U.S. border with Mexico illegally wait in a holding cell at the U.S. Border Patrol processing center in Nogales, Arizona. (File photo by Spencer Platt/Getty Images)

Federal officials are dealing with tens of thousands of asylum seekers arriving at the U.S.-Mexico border each month. Officials are searching for ways to house the families and unaccompanied children.

The announcement came after Tucson officials said this week that they have contracted with hotels to temporarily house migrants as a tent-like facility is being built by Customs and Border Protection.

The facility is scheduled to open in late April or early May and is designed to hold 500 people. But COVID-19 restrictions and other concerns likely will initially limit capacity to about 150 to 200 people, officials said.

Work on the structure has already started. A similar facility built in Yuma in 2019 had air conditioning and was stocked with food and clothes.

Huckelberry said Tucson can apply for reimbursement for providing shelter for migrants at hotels and motels. The city so far has paid more than $6,000 to house about 75 people in hotels, officials said.

Arizona's governor was joined by other Republican lawmakers, local officials and Florida Sen. Rick Scott on March 19 to discuss border security as the region experiences a surge in migrants.

County officials said more than 600 people have been driven from the border town of Ajo to a shelter in Tucson since March 19. Most were families who came to the U.S. from Brazil, Venezuela and Cuba.

Huckelberry said the county has spent more than $30,000 on transportation, including payments for separate vehicles for six migrants who tested positive for COVID-19. The additional federal funds will cover most of the county’s expenses, he said.

In 2019, Pima County helped shelter more than 20,000 asylum seekers and the federal government reimbursed the county for associated costs more than a year later. The funding was advanced this year.