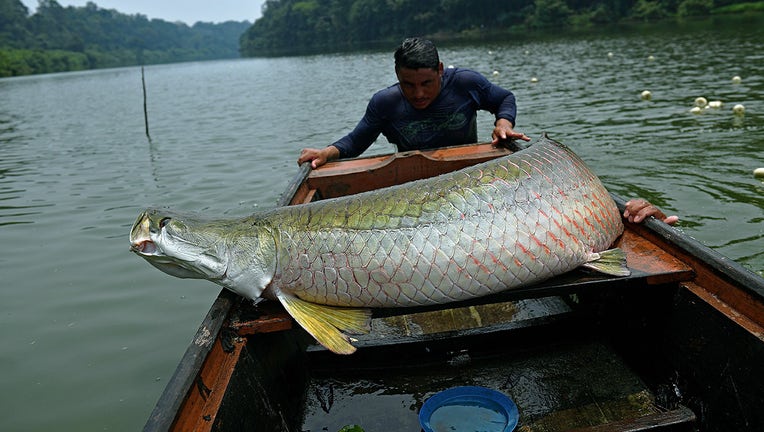 Fishermen load a recently caught pirarucu onto their boat in the Western Amazon region near Volta do Bucho in the Ituxi Reserve on September 20, 2017. (CARL DE SOUZA/AFP via Getty Images)

SAO RAIMUNDO, Brazil - Even in the most biodiverse rainforest of the world, the pirarucu stands out: It can weigh up to 440 pounds, by far the largest of 2,300 known fish species in the Amazon.

Not so long ago it nearly vanished from the Medio Jurua region as illegal and unsustainable fishing swept the lakes with large nets.

Now something remarkable has happened. The fish has come back to the lakes of Medio Jurua thanks to sustainable fishing practice by riverine communities and Deni Indigenous people.

Change began in the late 1990s. With the assistance of a Dutch Catholic priest, rubber tappers organized and led a campaign to persuade the federal government to create the Medio Jurua Extractive Reserve.

They proposed that river communities could take from the forest and its lakes - up to a point - and within protected areas. It worked.

Now, local communities produce atai, vegetable oils and rubber, and they leave the forest standing. Most successful of all has been the management of pirarucu: Illegal fishing has been sharply reduced and the mammoth size fish are flourishing.

"It requires the community to be well-managed and where everybody is in agreement that they may have to sacrifice in not being able to fish all of the pirarucu that are available so they could sell it all at once," explained Ted Gehr, USAID mission director in Brazil. "But the sacrifice and limiting the number of fish they can produce in one year, knowing that they'll reproduce more, and that in the long run it'll be more valuable." 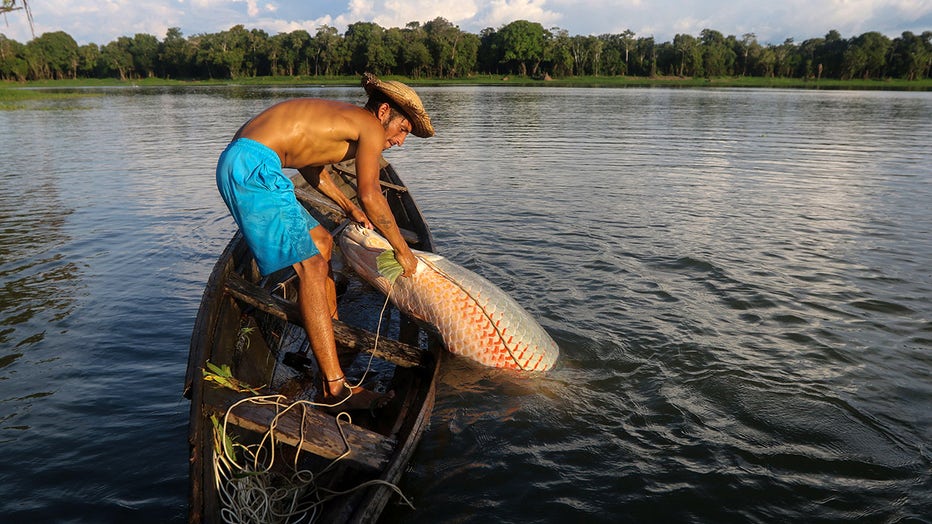 A fisherman takes out a large pirarucu from the water, at the Piagacu-Purus Sustainable Development Reserve in Amazonas state, Brazil, on October 26, 2019. (Photo by RICARDO OLIVEIRA/AFP via Getty Images)

The virtuous cycle plays out in the region of Carauari, which stretches along 404 miles of the Jurua River and is home to 35,000 people.

To see how things could have gone, look no further than the neighboring Javari Valley, where British journalist Dom Phillips and Indigenous expert Bruno Pereira were murdered last June.

The backdrop of that tragedy is a decades-old dispute between Indigenous communities and former rubber tappers who were hired by local businessmen to do illegal fishing, targeting mostly the pirarucu. Two local fishermen confessed to the crimes.

Illegal fishing is rampant in Brazil. It's the second most frequent environmental crime on protected land, after logging, according to an academic study based on official data.

Sustainable pirarucu fishing is done once a year, around September, the period of lowest water.

Fishing quotas are possible due to another remarkable characteristic of the pirarucu: It is one of the few fish species in the world that surfaces to breathe. It does that with a big splash, flashing its red tail out of the water.

A local fisherman and a researcher in the nearby Mamirarua region developed a way to take advantage of this, and count the fish since they stay underwater for no more than 20 minutes. The government now recognizes this counting method.

The survey is done once a year by certified fishermen, after taking a course. By law, only 30% of the pirarucu in a certain area can be fished the following year.

This controlled fishing has led to a surge in its population in regions where it's employed. In Sao Raimundo region, there were 1,335 pirarucus in the nearby lakes in 2011, when the managed fishing began. Last year, there were 4,092 specimens, according to their records. 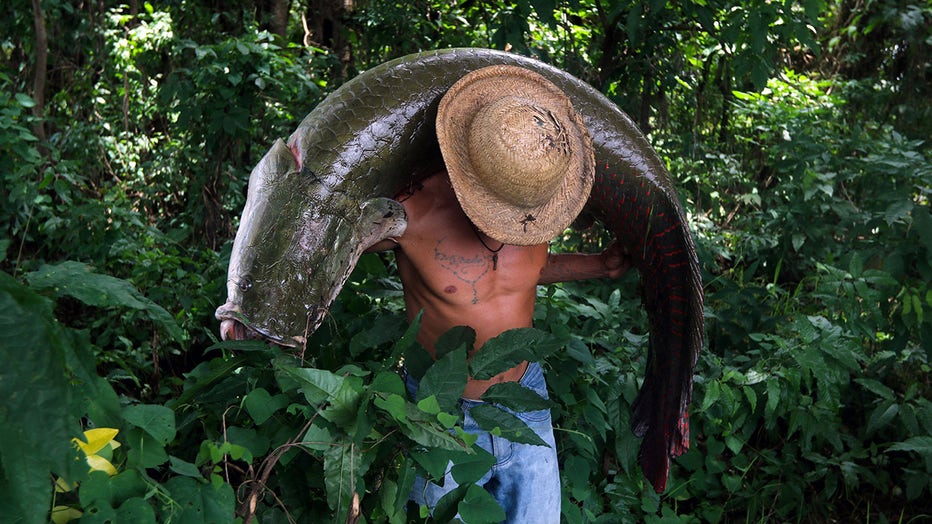 A fisherman carries a large pirarucu at the Piagacu-Purus Sustainable Development Reserve in Amazonas state, Brazil, on October 24, 2019. (Photo by RICARDO OLIVEIRA/AFP via Getty Images)

Pirarucu bring money into the community. This year, the goal is to buy a solar panel system to replace the diesel-fueled generator. Another share of the money goes to the community members who participate in the fishing. Women's and men's salaries are equal.

"Part of the money is distributed among the management workers. And here in the community, another part goes to a fund we created. It is a guarantee of financing an eventual need," offered Rosangela Cunha, president of the Women's Association of the Medio Jurua region.

To catch pirarucu, fishermen use special, stronger nets they weave themselves. The holes are large enough to allow smaller specimens to go through, as taking fish under five feet is prohibited.

When the fishers catch one, they haul in the net and club the fish in the head. Then they put it in their small boat. When it’s very heavy, two or three men are required to do the job.

The pirarucus are then taken from the lakes to a large boat by the Jurua River. There they are gutted, a task that is mostly done by women, and put on ice.

"It's a year-round activity due to the monitoring part. It's an activity that requires a very fine-tuned infrastructure to be able to do everything right," stated Manoel Silva da Cunha, chief of Medio Jurua Extractive Reserve. 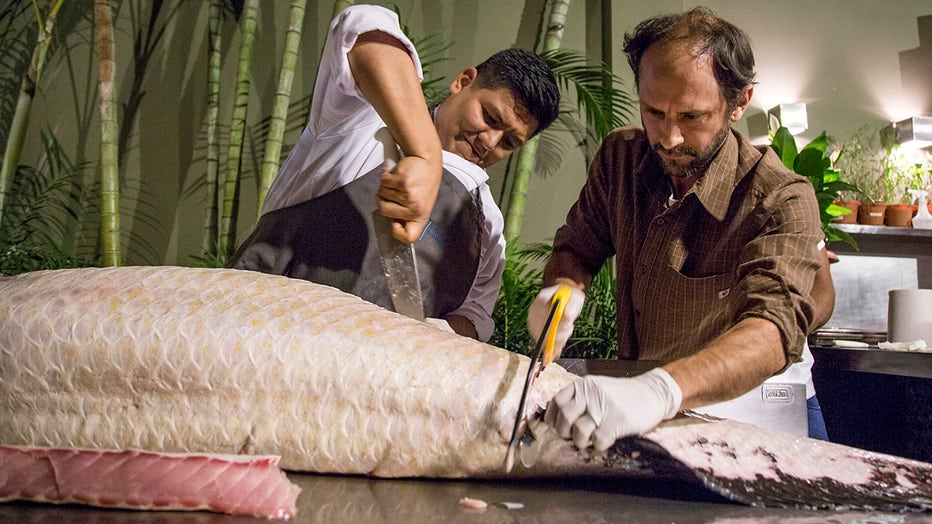 All the production is bought by the Association of Rural Producers of Carauari, known as ASPROC, the region's umbrella organization, so the fishers are never at the mercy of middlemen.

The associations now sells pirarucu to Brazil’s main cities including Sao Paulo and Brasflia, a complex endeavor that involves several days of transport by boat and road and usually takes more than two weeks.

ASPROC’s success has attracted several partnerships, such as the one with the Agency for International Development (USAID), which helped to finance a warehouse for processing fish in Carauari city, where the pirarucu is cut, frozen and packaged.

So far, the Medio Jurua region is free from the deforestation and fire that have been devastating elsewhere in the Amazon.

But the smoke that has left the skies grayish in September is a reminder that the destruction is not far away. The challenge is to be a strong organization and economy to stave off future threats.