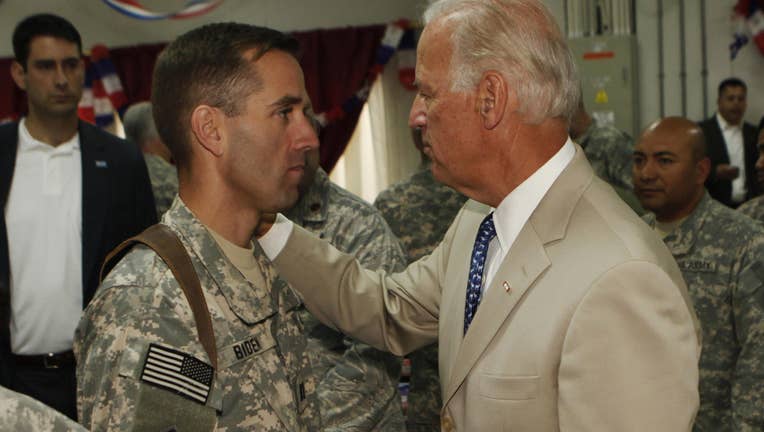 U.S. Vice President Joe Biden (R) talks with his son, U.S. Army Capt. Beau Biden (L) at Camp Victory on the outskirts of Baghdad on July 4, 2009. Biden said that America's role in Iraq was switching from deep military engagement to one of diplomatic

In a ceremony held in front of the presidential office, Kosovo President Vjosa Osmani handed over the medal to the U.S. Ambassador to Pristina, Philip S. Kosnett.

Beau Biden was in the Balkan country 20 years ago to help establish the rule of law there as it became independent from Yugoslavia. In a pre-recorded speech, Biden described the medal as "incredible" and "a great honor to recognize the legacy of our son."

Beau Biden worked in Kosovo after the 1998-1999 war with the military forces and also with the Organization for Security and Cooperation in Europe. He died in 2015 of brain cancer at 46.

"That’s why he was so committed to working with the people of Kosovo to make sure that war crimes were thoroughly investigated and professionally prosecuted," said Biden.

Kosovo declared independence from Serbia in 2008, a decade after a 1998-1999 war with Serb forces. The war ended after a 78-day NATO air campaign drove Serb troops out and a peacekeeping force moved in.

Most Western nations have recognized Kosovo, but Serbia and its allies Russia and China do not. Tensions over Kosovo remain a source of volatility in the Balkans.

Kamala Harris: Biden's son Beau 'really was the best of us'

Sen. Kamala Harris, speaking at her unveiling as the Democratic vice presidential nominee, talks about knowing Joe Biden's late son, Beau, and thanks the Bidens for placing their trust in her.