A coalition of community organizations have launched an educational awareness campaign to educate Arizona voters about Proposition 308.

PHOENIX (AP) - Arizona voters this November will decide whether to allow students regardless of their immigration status to obtain financial aid and cheaper in-state tuition at state universities and community colleges.

At least 18 states, including California and Virginia, as well as the District of Columbia now offer in-state tuition to all students who otherwise qualify regardless of status, according to a website that tracks higher education and immigration data.

But there has been little past voter support in Arizona for granting in-state tuition, which is about a third of the rate for out-of-state undergraduate students, to those who arrived in the United States without approval, even if they attended high school in the state for years. Voters in 2006 overwhelmingly approved a proposition that prevented students who entered the U.S. without authorization from getting in-state tuition and other financial benefits.

The current proposal known as Proposition 308, which was referred to this year’s Nov. 8 ballot by Arizona’s Legislature, would repeal some parts of the earlier initiative and allow all students including non-citizens to receive in-tuition rates as long as they graduated from and attended public or private high school or the home school equivalent for two years in Arizona.

Tens of thousands of immigrant students could potentially benefit from the proposition in a state where an estimated 275,000 migrants are living without authorization.

Arizona Republican State Sen. Paul Boyer introduced the measure for the ballot and it was passed by both houses. But a majority of Republicans opposed it.

"They’re here illegally," Republican state Sen. Michelle Ugenti-Rita said last month during a televised debate on the initiative. "And while I very much sympathize with so-called Dreamers or individuals who no fault of their own have been brought to this country, the reality is their immigration status does not qualify them for in-state tuition."

Reyna Montoya, CEO of Aliento, a community organization led by immigrant youth, argued for the initiative, saying that students and their parents had been paying taxes for years.

"It’s about fairness and giving a pathway for education," she said during the debate.

Luis Acosta, who was born in Mexico, has argued for Proposition 308, saying he was forced to seek a university education in Iowa because he could not afford the higher costs in Arizona, where he had lived his entire life after arriving at age 2. He graduated in Iowa with a bachelor’s degree in international studies and English.

Diego Diaz, a junior at Arizona State University, was brought to the U.S. by his family when he was 4. He said higher out-of-state tuition costs created an economic burden.

"I’m currently having to take a break from school to get finances under check," Diaz said at a September news conference promoting the proposition.

Some Arizona business owners say it makes sense to make sure the smartest young people remain and seek jobs in the state, no matter what their immigration status.

"We need more talented workers with degrees and we have now more than ever," John Graham, chairman and CEO of Sunbelt Holdings, said at the news conference. "That is why I’m supporting this initiative." 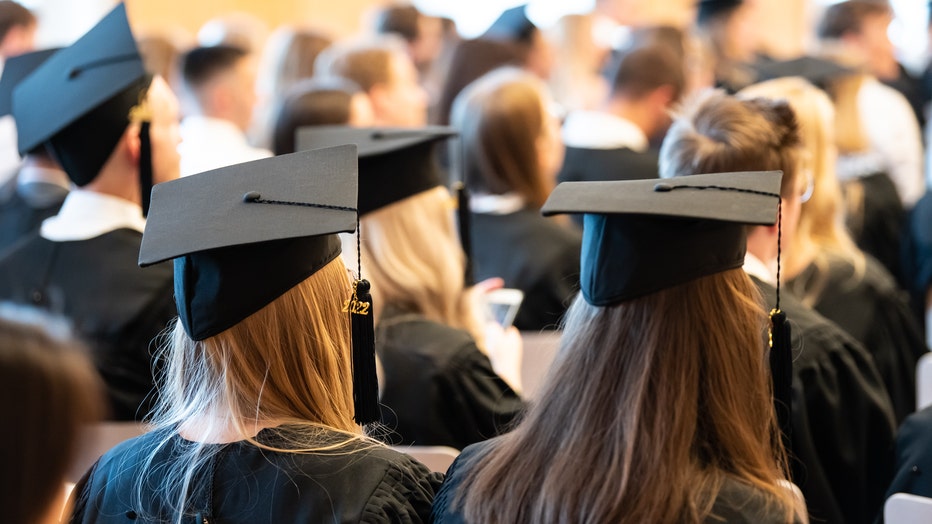 29 July 2022, Baden-Wuerttemberg, Mannheim: Graduates wear a graduation hat at a graduation ceremony at their university. (Photo by Silas Stein/picture alliance via Getty Images)