PHOENIX - Ron Watkins, one of the most prominent figures in the QAnon conspiracy movement, said Monday he is running for Congress in Arizona because the state is at the forefront of the fight by many Republicans over the 2020 election results.

Watkins, a prominent promoter of false claims that the presidency was stolen from Donald Trump, said he wants "to fix the elections from inside the machine."

"In the past year or so, I’ve been really involved in election integrity issues and especially out in Arizona, so I decided to come out here and just take it to the next step," Watkins told The Associated Press in a brief phone interview.

Arizona has been the epicenter of the push by Trump many of his supporters to find evidence backing the former president’s false claims that the 2020 election was marred by fraud. Trump supporters hired by state Senate Republicans to recount ballots and review election data confirmed Biden’s victory but spun falsehoods about deleted data, double voting and other malfeasance in a report that ignored basic facts about how elections are run.

For several weeks, Watkins has posted videos on the social networking site Telegram of his unsuccessful efforts to speak with Republican Attorney General Mark Brnovich, whom he is pressing to file charges over the claims of election irregularities.

Watkins has been vague about his ties to Arizona.

Watkins said he lived in Yuma briefly as a child, guessing it was between the ages of 5 and 7, but couldn’t remember if he attended school there. As supporting evidence of his Arizona ties, he emailed a photo of him as a child with his father and the family dog at the Grand Canyon. He also said he has family in the state but declined to elaborate.

Watkins said he moved to Arizona "about two weeks ago" but repeatedly refused to say where in the state he’s living, citing death threats he said he’s received. On papers filed with the Federal Elections Commission, he lists the address of a Phoenix condominium that has been owned since 2014 by Liz Harris and her husband, according to Maricopa County property records. Harris led a group of volunteers who interviewed voters at their doors and published a report claiming there were tens of thousands of "lost" and "ghost" votes, but it had no supporting evidence and drew nonsensical conclusions. 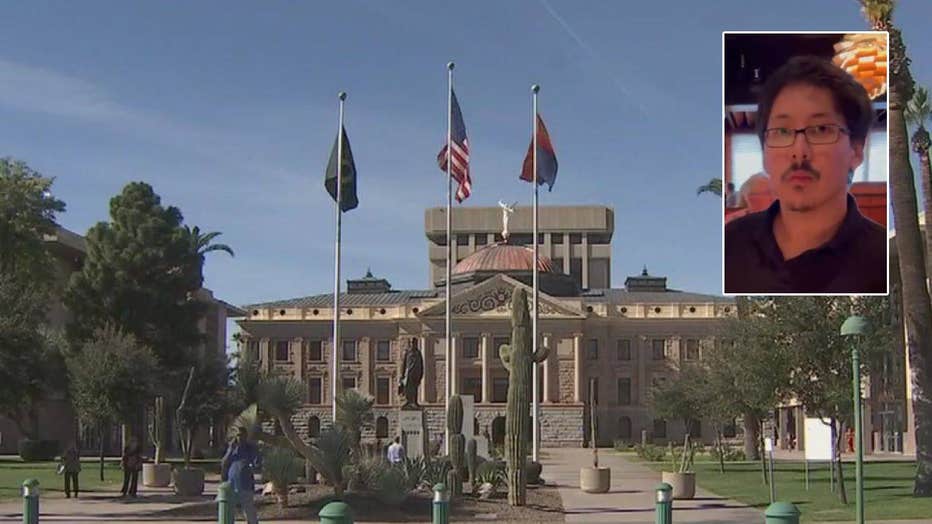 Ron Watkins, one of the most prominent figures in the QAnon conspiracy movement, said Monday he is running for Congress in Arizona because the state is at the forefront of the fight by many Republicans over the 2020 election results. (Tony Teora)

For his campaign headquarters, Watkins lists a Sedona address that appears to be a post-office box. He said he plans to live in the same district as Democratic Rep. Tom O’Halleran once the new congressional district boundaries are finalized.

Under the U.S. Constitution, Watkins needs only to be an "inhabitant" of Arizona on Election Day next year. There is no minimum period he must live in the state, nor a requirement to live in the district he wants to represent.

Watkins was the longtime administrator of 8kun and its predecessor, 8chan, online message boards that were known for misinformation and hate speech, and which played a crucial role in seeding the QAnon conspiracy movement. He has said he gave up the role last year.

A core belief for QAnon followers is that Trump was secretly fighting a Satan-worshipping, child sex-trafficking cabal of prominent Democrats, Hollywood elites and "deep state" enemies. An internet poster calling himself Q fueled the movement by posting clues on the 8kun message board.

Many believe Watkins himself is responsible for the messages posted by Q. He denied it.

"I’m not Q. I never was Q. I never posted as Q. I don’t know who posted as Q," Watkins said. "I mean, everybody’s got their own hypothesis. I don’t have any facts to back that up."

Arizona’s congressional district boundaries are still in the works, but O’Halleran is almost certain to face a tough re-election fight.

In addition to election issues, Watkins said he wants to pass a Digital Bill of Rights to prevent technology companies from restricting online discourse.

"We need to make sure that bots and companies and stuff aren’t censoring us, and we’re not being destroyed by algorithms, and we’re able to get our word out, and talk about the things that are important without getting banned and censored everywhere," said Watkins, who has been banned from Twitter.

He also said he wants to eliminate COVID-19 public health mandates and said he fears the United States is inching toward creating a Chinese-style social credit system that would restrict people from services based on their purchases or public activities.

Watkins is getting help from Tony Teora, a science fiction author who has run unsuccessfully for the California Assembly. If they raise enough money, they plan to hire a campaign manager, open an office and build out a campaign, Teora said.

"Ron’s going to build a true campaign out here. But it’s going to be based upon whether he has support, so he’s going to find out shortly," Teora said.