The House Committee on Oversight and Reform held a hearing on a controversial election audit in Maricopa County that was commissioned by the Arizona State Senate. FOX 10's Matt Galka reports.

WASHINGTON - The House Committee on Oversight and Reform held a hearing Thursday in Washington, D.C. on the election audit in Maricopa County that was commissioned by the Arizona State Senate.

Democratic members of the House committee on Thursday questioned Arizona officials on the potential damage that a partisan review of the state’s 2020 election results had on trust in American elections.

According to a news release, the full committee hearing was called "to assess the election ‘audit’ in Maricopa County, Arizona, conducted by Cyber Ninjas, Inc., and how this and similar audits undermine public confidence in elections and threaten our democracy."

"This is without a doubt the biggest threat to our democracy in my lifetime," Maricopa County Supervisor Bill Gates told the House Committee on Oversight and Reform. "If elected officials continue to choose party over truth, then these procedures are going to continue on, these privately funded government-backed attacks on legitimate elections."

Gates and board Chairman Jack Sellers have been pushing back all year against fellow Republicans in the Arizona Senate who issued subpoenas and fought court battles to allow contractors they hired to review the certified election results.

Both said the election in the state’s most populous county was free, fair and accurate, and that they remain baffled that fellow Republicans were willing to risk trust in elections because Trump raised unfounded claims of election fraud.

"As a Republican who believes in democracy, I dreamed of one day going to a nation that was trying to build a democracy and help them out," Gates said. "I never could have imagined that I would be doing that work here in the United States of America."

The committee invited multiple people involved with the audit to present in front of Congress Thursday morning. That included liaison Ken Bennett, audit critics from the Maricopa County Board of Supervisors Bill Gates and chairman Jack Sellers, and some election experts. Everyone fielded questions about the recently revealed results.

Republican committee members, meanwhile, worked to show the review conducted for the GOP-controlled Arizona Senate found significant issues with how the election in the county that includes Phoenix was conducted and said it should be common practice to conduct full election audits.

They called former Arizona Secretary of State Ken Bennett, who served as a go-between Senate Republicans and the contractors they hired to review the ballot count, election machines and computer software, to testify. Bennett said that while the recount showed that Biden actually picked up some votes, there remain unresolved issues involving voter registration, mail-in ballots and computer security.

"We should not fear auditing elections. We should embrace it and welcome it," said Bennett. "We did find several areas where election laws and procedures or may have been violated. These include missing or unmatched signatures on ballot affidavits, missing serial numbers, common user names or passwords used to log in to the election management system. Insufficient security protocols. Deleted logs from data delivered to the Senate."

County officials and outside election experts have panned the findings, saying most if not all are based on the Senate contractors’ flawed and amateur "audit" and easily debunked. Republican Arizona Attorney General Mark Brnovich, who is running for U.S. Senate, launched an investigation based on the audit’s findings.

"Auditing elections is not a threat to our democratic republic," Bennett said. "Anything we can do to make sure our elections are transparent, trackable, and publicly verified only strengthens our country."

Bennett said he supports changes in Arizona election law to boost security on mail-in ballots and other aspects.

Democrats on the committee called efforts in Arizona and other Republican-controlled states to enact new election restrictions a recipe for voter suppression.

The Brennan Center, a non-partisan law and policy group that pushes for greater access to voting, has tracked more than 200 proposed laws this year that add new voting restrictions, mainly prompted by Trump’s claims of voter fraud. More than 20 became law.

"Although the audit in Arizona failed to uncover any evidence of widespread fraud, it was successful in achieving its bigger goal to pave the way for election subversion laws that are spreading across this country," said Rep. Cori Bush, D-Missouri.

The county leaders got pushback from GOP lawmakers, including Arizona Rep. Andy Biggs. Biggs pointed to what the review said were violations of ballot chain of custody, computer security and verification of signatures on mail ballots during the election.

"I’m trying to understand — my colleagues, not my colleagues but my friends over here from Arizona, are saying they’re OK with those laws, the statutory violations," Biggs said.

"I frankly don’t believe there were any statutory violations," said Sellers, the county board chairman.

Biggs took the lead in questioning the three Arizonans who testified at Thursday’s hearing.

"They ripped everything they possibly could about the audit," Biggs said of the county leaders. "And at the same time that they were attacking the audit, they simultaneously argued that it buttressed their position as to who won the election.

"I view that as specious, inconsistent, fallacious," he said. "I was asked who won in Arizona. I don’t know."

Rep. Jamie Raskin, D-Maryland, asked Sellers and Gates what they thought would be the effect on democracy if fellow Republicans continue to question election outcomes despite recounts, audits and other reviews that show they were free and fair.

"It’s very troubling, because when you give people the facts, and they still do not accept them, that’s a problem," Sellers said.

Gates and other Maricopa County officials tried to debunk some claims during the hearing.

"They said we deleted files, but these were files the Cyber Ninjas just couldn’t find," Gates said. "This was either an out-and-out lie, or a level of incompetence from the Cyber Ninjas that was just staggering."

The committee also expressed concerns over the hiring of Cyber Ninjas to conduct the audit, saying the firm had no prior federal election audit experience.

Cyber Ninjas CEO Doug Logan was invited to testify but declined. There was an empty chair at the hearing.

"I suspect the reason he isn't here is because he doesn't have good answers that his involvement is one of the reasons this so-called audit was a fraud from the beginning," said Rep. Greg Stanton (D).

Two Republicans on the Maricopa County Board of Supervisors, Chairman Jack Sellers and Bill Gates, stood firm on their criticisms of the controversial audit.

"Losers of elections will just go out and find financial backers and just continue to drag these procedures on, and unfortunately, that is going to negatively impact our democracy," said Gates.

The audit's findings have since been submitted to the attorney general's Elections Integrity unit for further investigation.

Two Arizona Republican congressmen are on the committee – Reps. Paul Gosar and Andy Biggs. Rep. Biggs once again raised doubts about the findings.

"Who won the election in Arizona?" Rep. Biggs was asked.

"We don't know!" Rep. Biggs replied. "As the audit demonstrates very clearly, there are a lot of issues with this election that took place."

The hearing began at 7 a.m. MST and was streamed on the FOX 10 Phoenix YouTube channel. 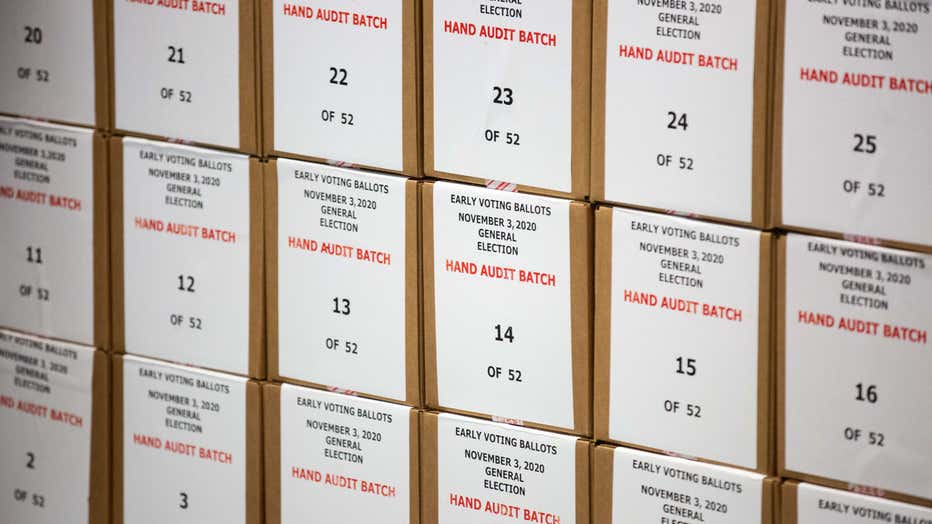 PHOENIX, AZ - OCTOBER 31: Ballots are pulled aside for a hand audit by Maricopa County Elections Department staff ahead of Tuesdays election on October 31, 2020 in Phoenix, Arizona. Early voting lasted from October 7th through the 30th in Arizona, wh