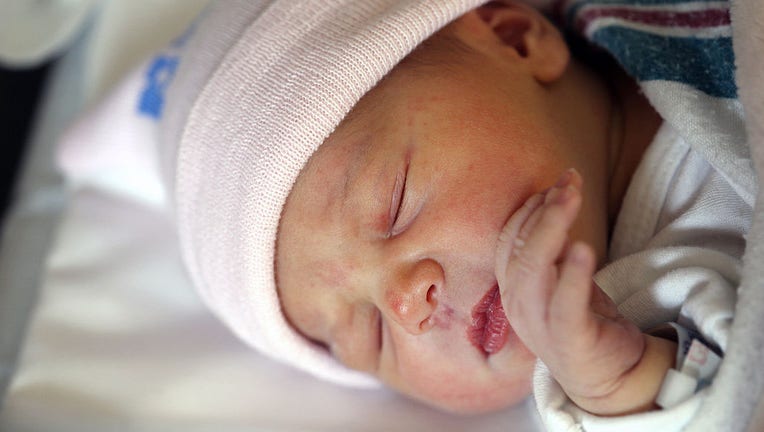 FILE IMAGE - A newborn baby girl after birth in a hospital. (Photo by Tim Clayton/Corbis via Getty Images)

Remote work as a result of the COVID-19 pandemic may have led to a small "baby boom" among U.S. women in 2021, a new working paper by economists suggests.

The paper, published this month by three economists from Princeton University, the University of California, Los Angeles, and Northwestern University, argues that both the increasing ability to work from home and the federal COVID-19 stimulus likely contributed to the boom.

Combining a modest fertility decline in 2020, and the 2021 "baby bump," the researchers said the pandemic led to a net increase of 46,000 children born to U.S. mothers.

Earlier this year, the U.S. Centers for Disease Control and Prevention released preliminary data about 2021 birth rates, which noted a small increase. The economists analyzed the information further for the working paper, looking at microdata from the CDC regarding births to U.S.-born mothers compared to foreign-born mothers.

But when looking at births to U.S.-born mothers, they found that the pandemic resulted in a small boom in 2021, raising the total fertility rate by roughly 6.2%.

"This 2021 ‘baby bump’ is the first major reversal in the U.S. fertility rates since the 2007 Great Recession and was large enough to reverse two years of declining fertility rates," the economists wrote.

The boom was most pronounced among first-time mothers and those under age 25, suggesting that the pandemic led many women to start their families sooner, the paper notes.

Working remotely can save thousands per year, career site finds

The average worker can save almost $5,000 a year just by not driving into the office anymore.

"Combining the modest 2020 fertility decline and the 2021 baby bump, the COVID-19 pandemic led to a net increase in births among U.S.-born mothers of around 46,000 children," the paper states.

"Our results suggest that unlike any other economic downturn in recent history, the COVID-19 recession increased rather than decreased fertility among U.S.-born women," it adds.

The researchers say this was due to the federal unemployment boost between March 2020 and September 2021, which caused poverty rates to fall across every race and age group in 2020, according to the U.S. Census Bureau.

The financial help, in tandem with an unprecedented rise in remote work, likely contributed to the small boom, the economists wrote. Among more educated Americans, 40% of days worked were still at home by the spring of 2021.

Other possible contributing factors were an increase in affluent families’ assets as stock markets and home prices soared, as well as a disruption to reproductive health care and abortion services, "which may have reduced fertility at older ages while also tending to increase unintended childbirth."

RELATED: 64% of employees would rather quit their jobs than return to the office full-time, survey finds