TEMPE, Ariz. - The Arizona State University Police Department is recommending charges against the four protesters who followed Democratic Sen. Kyrsten Sinema into a bathroom earlier this month and recorded the incident.

He said the four people, whose names have not been released, allegedly committed disorderly conduct and disruption of an educational institution.

"I don’t want to overstep on the Maricopa County Attorney’s Office and release names, because it’s still being processed and if they choose to prosecute I don’t want to interfere with that," he said.

Immigration activists confronted Sinema outside a classroom on Oct. 3 on the campus and subsequently followed her into a bathroom over "a pathway to citizenship" for illegal immigrants. They recorded the incident, and Sinema slammed their actions in a press release the next day.

"It is unacceptable for activist organizations to instruct their members to jeopardize themselves by engaging in unlawful activities such as gaining entry to closed university buildings, disrupting learning environments, and filming students in a restroom," Sinema said in the press release.

"In the 19 years I have been teaching at ASU, I have been committed to creating a safe and intellectually challenging environment for my students," the senator continued. "Yesterday, that environment was breached. My students were unfairly and unlawfully victimized. This is wholly inappropriate."

One of the immigration activists who confronted Sinema, Dr. Sophia Marjanovic, defended her actions in a Facebook post earlier this month, accusing critics of being the "tone police."

"None of you have a right to tone police my desperate demands for labor protections after what I have endured as a human trafficking survivor due to the f---ed up gig economy," Marjanovic wrote in her Facebook post. 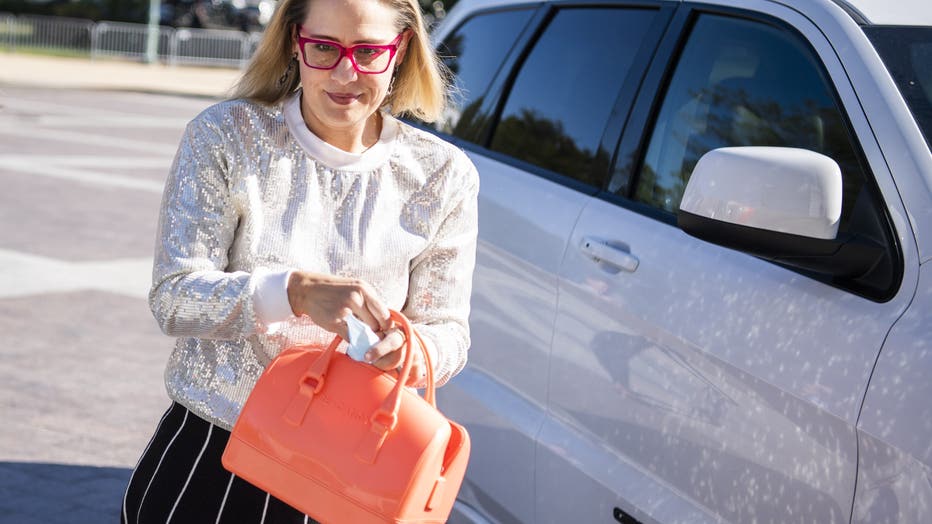 SINEMA FIRES BACK AFTER FAR-LEFT ACTIVISTS RECORD HER IN ASU BATHROOM: ‘UNACCEPTABLE BEHAVIOR’

"For now, connect with the fact that you are on stolen Indigenous land and Indigenous women and children go missing and murdered because we don't have access to stable jobs, stable housing, clean water, clean food, or stable decent healthcare despite the fact that Indigenous people have upheld our end of the treaty in assimilating and getting educated," she continued.

The incident came amid liberal outrage that Sinema and Sen. Joe Manchin, both moderate Democrats, reiterated they would not support the price tag on the $3.5 trillion spending package put forth by their party.

Manchin was also confronted by protesters around the same time as Sinema by a group of kayakers while he was on his houseboat.

MANCHIN CONFRONTED BY KAYAKERS IN HIS DC HOUSEBOAT

President Biden, when was asked about the incidents, responded,  "I don’t think they’re appropriate tactics, but it happens to everybody."

"The only people it doesn’t happen to are the people who have Secret Service standing around them," Biden said.

Video of the incident, which was posted by Living United for Change in Arizona (LUCHA), shows activists first confronting Sinema at her ASU classroom, then following her down the hall as the senator went into the bathroom and shut the door of a stall. FOX 10's Nicole Garcia reports.