Video of the incident, which was posted by Living United for Change in Arizona (LUCHA), shows activists first confronting Sinema at her ASU classroom, then following her down the hall as the senator went into the bathroom and shut the door of a stall. FOX 10's Nicole Garcia reports.

The woman who followed Sen. Kyrsten Sinema, D-Ariz., into the bathroom while filming her defended her actions, accusing critics of being the "tone police" in a Facebook post.

Dr. Sophia Marjovic, one of the immigration activists who confronted Sinema at Arizona State University over "a pathway to citizenship" for illegal immigrants this weekend, defended filming the senator while following her into the bathroom.

Marjovic accused critics of her filming a senator as she went into a bathroom stall as trying to "tone police" her "desperate demands for labor protections" in a Sunday Facebook post, saying the critics did not "have a right" to do after what she "endured as a human trafficking survivor due to the f---ed up gig economy."

SINEMA FIRES BACK AFTER FAR-LEFT ACTIVISTS RECORD HER IN ASU BATHROOM: ‘UNACCEPTABLE BEHAVIOR’

"None of you have a right to tone police my desperate demands for labor protections after what I have endured as a human trafficking survivor due to the f---ed up gig economy," Marjovic wrote in her Facebook post.

"For now, connect with the fact that you are on stolen Indigenous land and Indigenous women and children go missing and murdered because we don't have access to stable jobs, stable housing, clean water, clean food, or stable decent healthcare despite the fact that Indigenous people have upheld our end of the treaty in assimilating and getting educated," she continued.

Marjovic also wrote that she "will speak about the controversy regarding following Senator Sinema into the bathroom" when she has "the time."

Sinema unloaded on the group of activists in a Monday press release, saying they "filmed and publicly posted videos" of her students "without their permission" as well as "footage taken of both my students and I using a restroom." 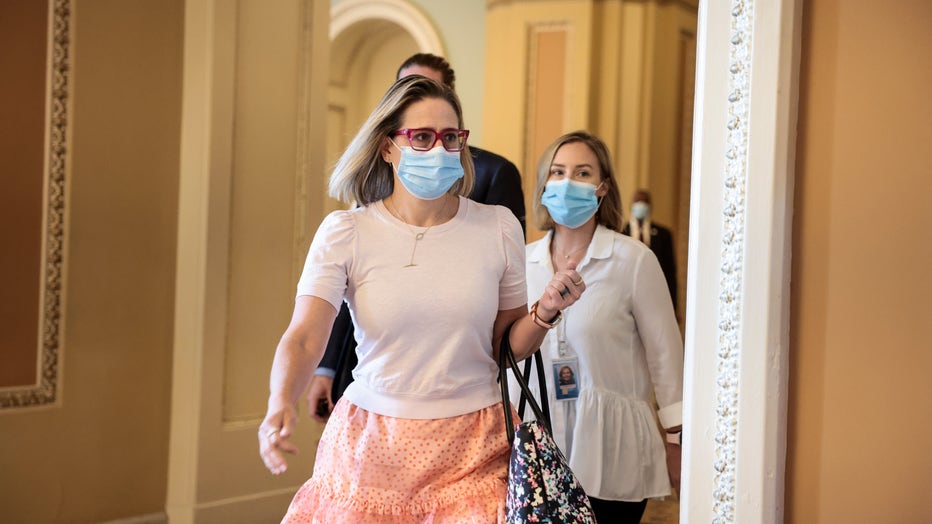 "It is unacceptable for activist organizations to instruct their members to jeopardize themselves by engaging in unlawful activities such as gaining entry to closed university buildings, disrupting learning environments, and filming students in a restroom," Sinema said in a Monday press release.

"In the 19 years I have been teaching at ASU, I have been committed to creating a safe and intellectually challenging environment for my students," the senator continued. "Yesterday, that environment was breached. My students were unfairly and unlawfully victimized. This is wholly inappropriate."

Sinema was confronted by immigration activists who followed the senator from the classroom where she teaches to the bathroom while demanding the Arizona Democrat take action on a "pathway to citizenship."

Marjovic did not immediately respond to Fox News' requests for comment.