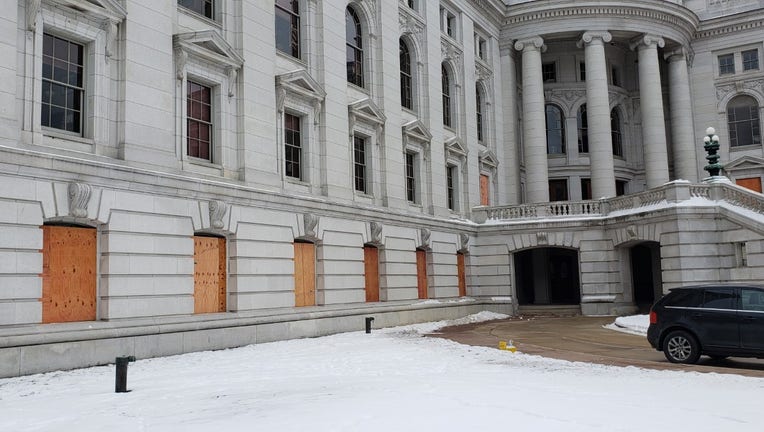 The protections came as the FBI issued a bulletin warning of plans for armed protests at all 50 state capitals and in Washington ahead of President-elect Joe Biden's Jan. 20 inauguration.

Washington state Gov. Jay Inslee activated hundreds of National Guard troops to help state police keep order at the state Capitol. At least two people were arrested, including a man who tried to walk past authorities as lawmakers were to begin their session and shouted: "I have every right to witness this."

At the Georgia Capitol, a state patrol SWAT team walked the perimeter wearing fatigues and carrying rifles while lawmakers gathered inside for the start of a two-year term. State troopers were stationed throughout the Iowa Capitol for opening day as more than 200 people opposing coronavirus mask mandates chanted "freedom" during a peaceful rally.

Legislatures convened in more than a half dozen states. By week’s end, three-fourths of all state legislatures will have opened their sessions. Because of concerns about the coronavirus, many state capitols had already adopted procedures to curb the potential for large crowds, including arranging for lawmakers to meet remotely. Those steps greatly reduced the number of people who are actually working in capitol buildings.

Speaking to reporters before traveling to Texas on Tuesday, President Donald Trump said his remarks to supporters at a rally prior to the violent siege on the US Capitol were totally appropriate.

In Michigan, a state commission voted Monday to ban the open carrying of weapons in the Capitol building.

In Idaho, doors to the House and Senate chambers were locked Monday morning, and two state troopers were stationed at each entrance. In past years, the doors were propped open while an unarmed statehouse staff member controlled access.

During a special session last August, a group that included anti-government activist Ammon Bundy forced its way past overwhelmed troopers and filled the Idaho House gallery despite COVID-19 restrictions limiting the number of people allowed in. The group called People’s Rights was founded by Bundy and opposes the restrictions. Its leaders were urging members to show up Monday at the Capitol.

RELATED: Trump says he wants 'no violence' as impeachment over Capitol riot nears

Glen Thorne wore a handgun in a holster on his right hip Monday at the Capitol. Openly carrying weapons in the building is legal. Thorne said he wanted to make sure Republican Gov. Brad Little "knows that we’re here."

"We want to end the state of emergency for Idaho. It’s ridiculous. We all want to go back to a normal state of living," Thorne said. He did not think the group would cause trouble.

"This is Idaho. We’re all gun-carrying, respectful Republicans," said Thorne, who lives in Buhl, Idaho, about a two-hour drive to the southeast of Boise.

"If I feel things are going to get heightened up, I may put it on," said Christensen, who also carried a .45-caliber handgun on his belt, which is standard procedure for him.

In Georgia, Republican Gov. Brian Kemp and other officials approved construction of a fence around the Capitol last year after racial injustice protests. Kemp has kept a group of National Guard soldiers on active duty to protect state properties since last summer, when protesters smashed windows and set a fire at state public safety headquarters in Atlanta.

Georgia House Speaker David Ralston, another Republican, said he had "full confidence" that authorities would be "ready to do whatever needs to be done to to protect the members, staff, the public, the media, and all the people that have to be here."

A memo issued late last month by the FBI office in Minneapolis and confirmed by The Associated Press warned of credible threats for this Sunday at the state capitols in Minnesota and Michigan. The memo said followers of the right-wing Boogaloo movement had done reconnaissance at the Capitol in St. Paul, including scouting police sniper locations that would need to be destroyed if a gunbattle broke out.

Inslee, a Democrat, activated 750 members of the National Guard. On the same day as the deadly riot in Washington, D.C., a group of armed people broke down a gate outside the governor’s mansion in Olympia, Washington, and made it to the porch and front yard before being convinced to leave by police.

On Monday, lawmakers had to drive through an area gated off and guarded by the National Guard to park outside the Capitol. A small group of protesters gathered in the morning, shouting that they should be let inside the building to observe lawmakers.

"It’s a sad day for our country, isn’t it, where you have to have that kind of security around the people who were elected to represent you," Democratic Sen. Patty Kuderer said. "Unfortunately, we live in troubling times, and I do believe we’re going to get through it, but it’s going to take a lot of time and a lot of effort."

In Missouri, Republican Gov. Mike Parson's inauguration proceeded Monday without incident. Concrete barriers and extra police — both typical inaugural precautions — surrounded the Capitol grounds where fewer than 2,000 people gathered. Parson told reporters later that security precautions also will be taken at potential upcoming demonstrations, though he was not specific.

Kansas House Speaker Ron Ryckman Jr., a Republican, said he was worried about protests at state capitols planned for this coming weekend and asked for extra security from the Kansas Highway Patrol.

Oregon state police will conduct building security training for those who work at the state Capitol, including journalists, on Tuesday and Wednesday.

In Michigan, where armed demonstrators against coronavirus restrictions entered the Capitol last year, there was little discussion as the open-weapons ban was approved. Michigan lawmakers are to return to session Wednesday.

Some of the anti-government extremists accused in a plot to kidnap Democratic Gov. Gretchen Whitmer had attended the earlier lockdown protests. Prosecutors say the accused ringleader initially talked of recruiting 200 men to storm the building, take hostages and "execute tyrants."

Authorities are aware of recent online posts promoting statehouses marches and would make "both seen and unseen" security enhancements at the Capitol for the next couple weeks, Michigan state police spokeswoman Shanon Banner said.