Tempe Union to phase out school resource officers on all campuses

TEMPE, Ariz. - Board members of the Tempe Union High School District voted to phase out school resource officers (SROs) on during a late night meeting on Wednesday.

After hearing from former law enforcement, students and parents during public comment, the board made the controversial 3-2 decision to get rid of all SROs.

The board set a target time of August of next year to phase out the officers on the district's six campuses.

In a resolution prepared for Wednesday's meeting, the board says it recognizes there are "alternative school safety plans without the current usage of SROs" to keep students and staff safe while building positive community relationships and ensure a safe learning environment.

The district cited research by the U.S. Dept. of Education which found that Black students in the district are three times more likely to be referred to law enforcement than white students.

The board noted the importance to stakeholders across the community to find ways to reduce that disproportionality.

To phase out school resource officers, the superintendent will have to develop a timeline and budget considerations to implement "equitable discipline practices." A revised school safety plan without a police presence at schools will need to be submitted.

Board members took comments from a mixed public, with some wanting resource officers to stay in schools and others wanting to see them replaced with mental health resources like counselors and psychologists.

Tempe Union currently has agreements with Tempe and Phoenix Police to provide resource officers. The goal is to have a new program in place by the start of the next school year.

Retired Tempe Police Chief Tom Ryff says he feels law enforcement is under attack nationally, and wants to know more about the resolution.

"I can tell you from having read that document from school administrators and board members, I’d give them an F. It’s a failing document, it makes no sense," Ryff says.

The district also considers research by the U.S. Department of Education, saying black students in the district are three times more likely to be referred to law enforcement than white students. The board says it's important for stakeholders across the community to establish a system to reduce disproportionality in student discipline.

"We believe that having those people there instead of an SRO will be greatly beneficial to our students because that support for mental health will be there and our safety is still secured with our security officers," Salas explained.

A statement from the Tempe Officers Association President Rob Ferraro reads, in part, "While the national conversation about school resource officers continues, the SROs we represent have worked hard to be an asset for the communities in which they work, building useful relationships throughout the school district and the education community."

Ferraro says regardless of the board's decision, officers will advance community relations and do everything they can to keep students and teachers safe.

Mackenzie White teaches criminal justice at Marcos de Niza High School in Tempe and her dad is a retired Gilbert Police officer. She says she wants SROs on her campus.

"Removing our SRO would be very difficult for my classroom and to have that person, to have that life experience, and being the officer in uniform on campus, it is so vital for the students to see that," she said.

However, students like Rebeca Salas say it's time for a change.

"For me personally and these student leaders out here, we just believe that SROs are really not something that we believe should be in school," she said.

All the principals in the district told the board to not abolish SROs.

"Phoenix Union will use off-duty officers, as and when needed, to assist with required law enforcement notifications, campus and community safety needs, and other mandatory reporting issues. Officers will be assigned to the district, not to schools," read a portion of a statement by Phoenix Union High School District at the time of the decision. 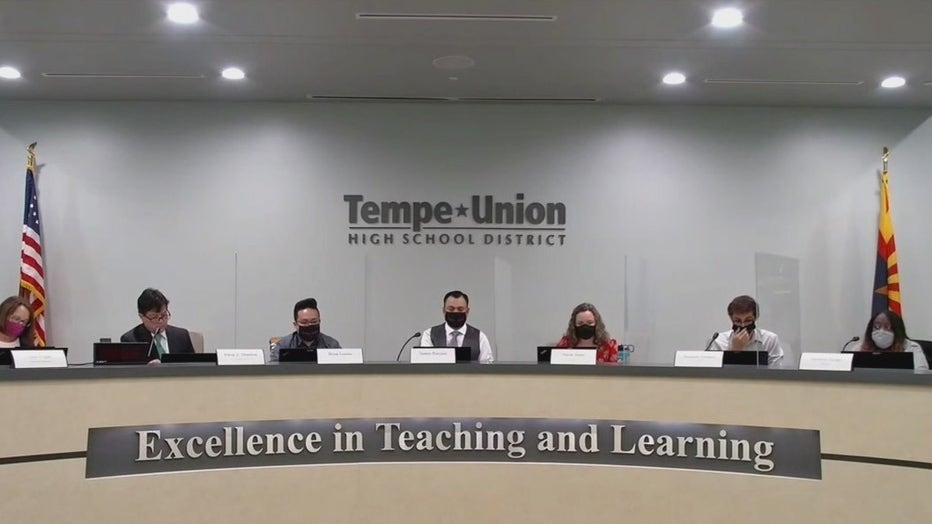