Police are searching for the suspect in the shooting and explosion at a Brooklyn, New York, subway station that left 10 people shot.

NEW YORK - Several Uber and Lyft customers criticized the ride-sharing apps on Tuesday for briefly implementing surge pricing following a shooting at a Brooklyn-area subway station, which left over two dozen people injured while the suspect was still at large.

The incident happened on a subway line that runs through Brooklyn’s Sunset Park neighborhood, which is about a 15-minute train ride to Manhattan. It occurred during the morning rush hour and closed other transit lines as a result.

With many forced to turn to rides-haring apps like Uber or Lyft, some took to Twitter to complain after observing the automated fare increase due to increased demand.

"@Uber turn off surges in sunset park. People are scared, let them get out safely," one person tweeted. Another person accused the company of looking to "profit off of people’s suffering."

A Lyft customer also shared a screenshot of the app, tweeting: "Didnt see anything about ‘Shooting Surge Pricing’ in @lyft terms of use."

Uber said in a statement that after the shooting incident, the company "disabled surge pricing in the vicinity and capped pricing citywide. "

"Our hearts go out to the victims of this morning’s terrible shooting in Sunset Park," an Uber spokesperson told FOX Television Stations. "As always, Uber strives to be a resource for New Yorkers aiming to get around New York City."

The company added that it will work to refund any Uber customers who experienced "unintended charges during this emergency."

Lyft similarly said it had suspended "prime-time pricing" for riders in the area and was "working to adjust fares for certain riders who paid prime-time prices when the situation first unfolded."

A massive emergency response descended at about 8:30 a.m. on the 36th Street Station on the N line at 4th Avenue after a gunman reportedly filled a rush-hour subway train with smoke and shot multiple people, authorities said. At least 28 people were injured in some way during the attack, including 10 who were shot, officials said.

Five of the shooting victims were in critical condition. Other injuries included shrapnel and smoke inhalation, according to FOX 5 NY. 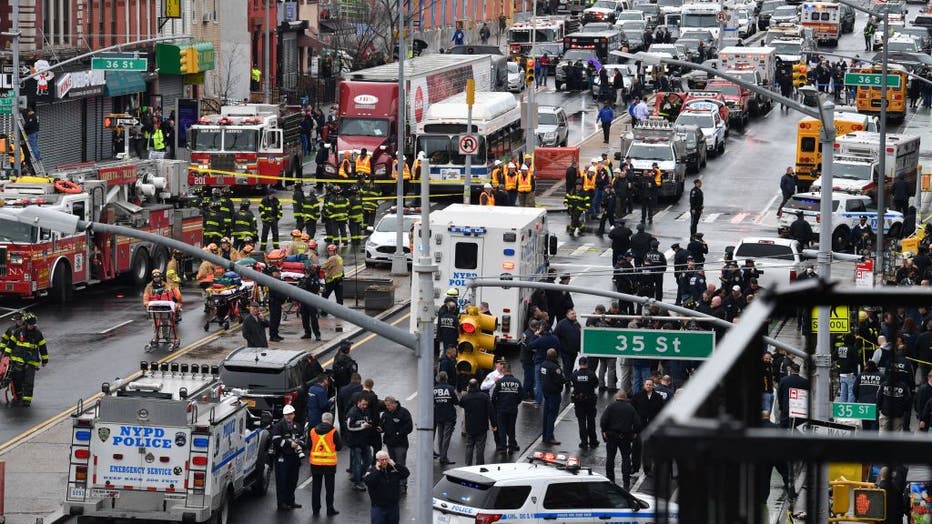 Emergency vehicles and the New York Police Department crowd the streets after several people were injured during a rush-hour shooting at a subway station in the New York borough of Brooklyn on April 12, 2022. (Photo by ANGELA WEISS/AFP via Getty Imag

The suspect fled the station and remained on the run. Preliminary information indicated that the suspect was a man wearing a construction vest and a gas mask.

Uber’s surge pricing generally occurs automatically when demand for rides goes up. In cases with "very high demand," prices can increase "to help ensure that those who need a ride can get one," the ride-sharing app states on its website.

"Bad weather, rush hour, and special events, for instance, may cause unusually large numbers of people to want to request a ride with Uber all at the same time," Uber says.

Whenever surge pricing is implemented, the app lets customers know — allowing them to choose to pay or wait until the rates go back down.

Others on social media responded to criticisms of the ridesharing apps’ surge pricing, noting how this often entices more drivers to pick up riders.

"Any Uber drivers wanna drive into an active shooter scene for $15?" one person wrote sarcastically on Twitter.

"Yeah as a former Uber driver I don’t think people understand how this works. Surge pricing happens to encourage drivers to go out and drive. Uber can’t force me to. I’m just a regular person trying to pay rent and bills. I also don’t want to go to where an active shooter is," another person tweeted.

Meanwhile, witnesses described a chaotic, bloody scene as the injured were brought to the street level, according to FOX 5 NY. Photos and videos on social media showed a man covered in blood lying on the platform and others running from the station trying to escape above ground. Several victims appeared to have sustained injuries to the lower extremities.

One man, who rides the N train to work every day, told FOX 5 NY that he heard a loud bang after it pulled away from the 56th St. Station. Kenneth Foote-Smith said the people in his subway car started panicking and moving forward to the conductor's door at the front of the car.

"There's this white smoke starting to fill up the car behind us and we see people banging on the doors that are between the subway cars," Foote-Smith said. The train then came to a stop right before it pulled into the 36th St. Station.

"That's when we hear 'pop, pop, pop' like three or four real quick pops," Foote-Smith continued. "And the screaming has now increased. There's more people against the door trying to get out to escape."

Foote-Smith described to the local news station how he saw a man at the door of the car behind his with "fear in his eyes" and everyone was screaming.

Fire and police officials were investigating reports that there had been an explosion, but the police department tweeted that there were "no active explosive devices at this time." Multiple smoke devices were found on the scene, said mayoral spokesperson Fabien Levy.