Dealing with COVID-19: How to live with the virus

As new variant continue to spread across the U.S., we talk with doctors about how to live with the virus now and in the future.

Propelled in part by the wildly contagious omicron variant, the U.S. death toll from COVID-19 hit 900,000 on Friday, less than two months after eclipsing 800,000.

The two-year total, as compiled by Johns Hopkins University, is greater than the population of Indianapolis, San Francisco, or Charlotte, North Carolina.

The milestone comes more than 13 months into a vaccination drive that has been beset by misinformation and political and legal strife, though the shots have proved safe and highly effective at preventing serious illness and death.

"It is an astronomically high number. If you had told most Americans two years ago as this pandemic was getting going that 900,000 Americans would die over the next few years, I think most people would not have believed it," said Dr. Ashish K. Jha, dean of the Brown University School of Public Health.

He lamented that most of the deaths happened after the vaccine gained authorization.

"We got the medical science right. We failed on the social science. We failed on how to help people get vaccinated, to combat disinformation, to not politicize this," Jha said. "Those are the places where we have failed as America."

President Joe Biden lamented the milestone in a statement Friday night, saying, "After nearly two years, I know that the emotional, physical, and psychological weight of this pandemic has been incredibly difficult to bear."

He again urged Americans to get vaccinations and booster shots. "Two hundred and fifty million Americans have stepped up to protect themselves, their families, and their communities by getting at least one shot — and we have saved more than one million American lives as a result," Biden said.

Just 64% of the population is fully vaccinated, or about 212 million Americans, according to the Centers for Disease Control and Prevention.

"We have underestimated our enemy here, and we have under-prepared to protect ourselves," said Dr. Joshua M. Sharfstein, a public health professor at Johns Hopkins Bloomberg School of Public Health. "We’ve learned a tremendous amount of humility in the face of a lethal and contagious respiratory virus."

Nor is COVID-19 finished with the United States: Jha said the U.S. could reach 1 million deaths by April.

The latest bleak milestone came as omicron is loosening its grip on the country.

New cases per day have plunged by almost a half-million since mid-January, when they hit a record-shattering peak of more than 800,000. Cases have been declining in 49 states in the last two weeks, by Johns Hopkins' count, and the 50th, Maine, reported that confirmed infections are falling there, too, dropping sharply over the past week. 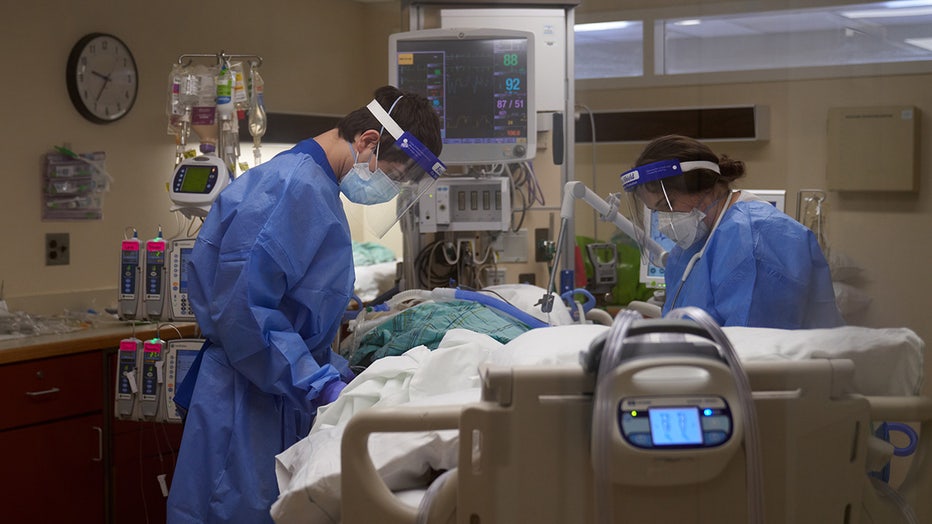 Also, the number of Americans in the hospital with COVID-19 has declined 15% since mid-January to about 124,000.

Deaths are still running high at more than 2,400 per day on average, the most since last winter. And they are on the rise in at least 35 states, reflecting the lag between when victims become infected and when they succumb.

Still, public health officials have expressed hope that the worst of omicron is coming to an end. While they caution that things could still go bad again and dangerous new variants could emerge, some places are already talking about easing precautions.

"Post-surge does not imply that the pandemic is over or that transmission is low, or that there will not be unpredictable waves of surges in the future," she warned.

Despite its wealth and its world-class medical institutions, the U.S. has the highest reported toll of any country, and even then, the real number of lives lost directly or indirectly to the coronavirus is thought to be significantly higher.

Experts believe some COVID-19 deaths have been misattributed to other conditions. And some Americans are thought to have died of chronic illnesses such as heart disease and diabetes because they were unable or unwilling to obtain treatment during the crisis.

The Rev. Gina Anderson-Cloud, senior pastor of Fredericksburg United Methodist Church in Virginia, lost her dementia-stricken father after he was hospitalized for cancer surgery and then isolated in a COVID-19 ward. He went into cardiac arrest, was revived, but died about a week later.

She had planned to be by his bedside, but the rules barred her from going to the hospital.

"I think it’s important for us not to be numbed. Each one of those numbers is someone," she said of the death toll. "Those are mothers, fathers, children, our elders."

"We have underestimated our enemy here, and we have under-prepared to protect ourselves," said Dr. Joshua M. Sharfstein, a public health professor at Johns Hopkins Bloomberg School of Public Health. "We’ve learned a tremendous amount of humility in the face of a lethal and contagious respiratory virus."

The latest 100,000 deaths encompass those caused by both the delta variant and omicron, which began spreading rapidly in December and became the predominant version in the U.S. before the month was out.

While omicron has proved less likely to cause severe illness than delta, the sheer number of people who became infected with it contributed to the high number of deaths.

Ja said he and other medical professionals are frustrated that policymakers are seemingly running out of ideas for getting people to roll up their sleeves.

"There aren’t a whole lot of tools left. We need to double down and come up with new ones," he said.

COVID-19 has become one of the top three causes of death in America, behind the big two — heart disease and cancer.

"We have been fighting among ourselves about tools that actually do save lives. Just the sheer amount of politics and misinformation around vaccines, which are remarkably effective and safe, is staggering," Sharfstein said.

He added: "This is the consequence."