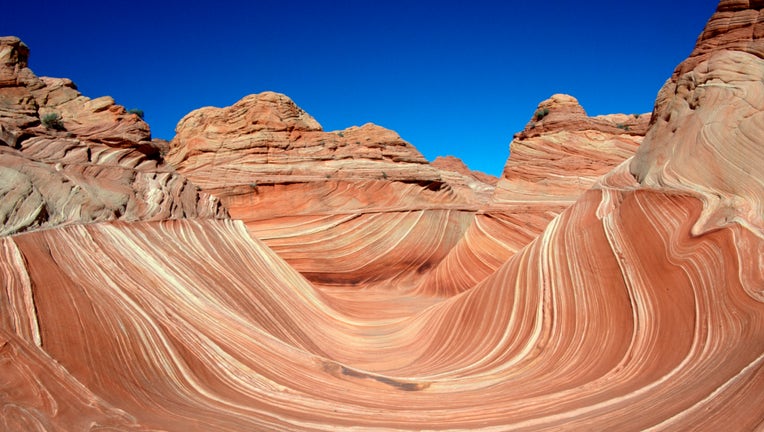 SALT LAKE CITY - Outdoor enthusiasts and landscape photographers hoping to land one of the elusive permits needed to explore the colorful, contoured landscape of a hike called The Wave in the U.S. Southwest will have a better chance under a federal plan announced Jan. 11 that allows more than three times the previous number of daily visitors.

The plan takes effect Feb. 1 and will allow 64 people per day to hike the popular rock formation near the Utah-Arizona border, the U.S. Bureau of Land Management said in a news release. That is up from the previous limit of 20 people per day, which had been in place for two decades.

Conservation groups decried the decision as a mistake that will damage the fragile desert landscape and cut into the solitude of hikers’ experience.

Fueled by a rise in selfies and pictures shared on social media, requests to do the hike more than doubled over the last seven years, to 215,500 through November 2020, when less than 4% who applied were approved for permits through online and in-person lotteries, government figures show.

Bureau of Land Management officials called it a balance between providing more access to the iconic trail while preserving the landscape.

Officials heard a steady chorus of complaints from people about how difficult it was to get chosen, leading the Bureau of Land Management to reexamine the limit, said Michael Herder, the bureau's district manager in the Arizona strip. Their analysis determined more people may mean more trash but won't notably accelerate erosion of the sandstone, Herder said.

The plan allows the agency to increase the daily number up to 96 if they determine the trail can handle it or decrease it below 64 if the new rule leads to negative effects, he said. Herder, who called the figure they chose a good place to start, and other government officials are excited more people will be able to experience the geological wonder.

The Wave's wide, sloping basin of searing reds, oranges and yellows in the Vermilion Cliffs National Monument is one of the most photographed landscapes in North America. Visitors must make a 6-mile (9.5-kilometer) round-trip hike through tall sandstone buttes and sagebrush to get to the red rock formation.

The decision will mar the unique landscape for future generations as hikers damage the delicate sandstone, said Taylor McKinnon, a senior campaigner with the Center for Biological Diversity. Visitors also won't enjoy the same solitude that the previous daily limit provided, he said.

"It is going to damage the unique geology there. There are going to be bigger crowds. It is going to be harder to get a picture without somebody else in it," McKinnon said. "It really reflects the Trump administration’s general disdain for preserving the quality and ecological health of America’s public lands."

The Center for Biological Diversity plans to consider a lawsuit to challenge the decision, McKinnon said. He is also hopeful President-elect Joe Biden's administration will reverse course.

Herder said solitude can still be found in surrounding areas near the hike and contended that many visitors feel more comfortable and safer with more people on the trail.

There was a trio of deaths at the Wave in 2013, after which the agency posted new trailhead signs and safety warnings. In 2019, a Belgian man died from heat exhaustion after getting lost on the trail.

This story has been corrected to show that the federal government says there were 215,500 requests made through November 2020, not 191,000 in 2020 as it originally reported.