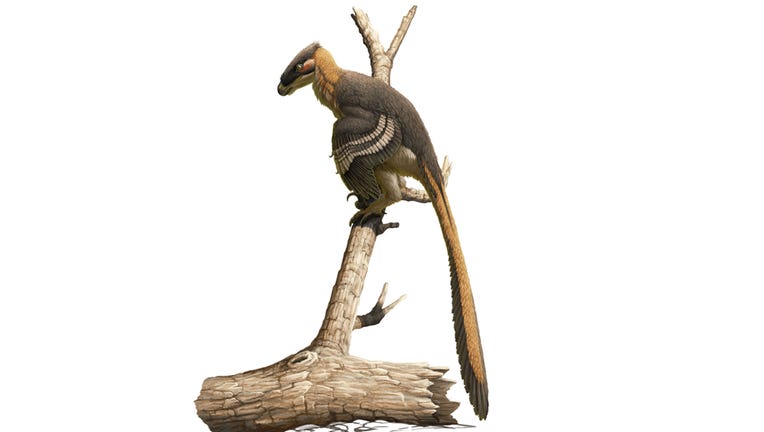 Vectiraptor greeni, a new fierce predatory dinosaur from the Isle of Wight in the U.K. (Credit: Gabriel Ugueto)

BATH, England - Paleontologists discovered fossils from over 100 million years ago of an older, "more heavily built" relative of the famed velociraptor dinosaur.

The new bird-like dinosaur, named Vectiraptor greeni after amateur paleontologist Mick Green who first discovered its bones on the Isle of Wight in Great Britain, was about the size of a wolf — around 3 meters (10 feet) long from nose to tail, researchers said.

The dinosaur would have prowled through forests that covered the land in the Early Cretaceous geological period, about 125 million years ago. It used huge slashing talons on its feet and finely serrated teeth to kill its prey, according to scientists from the Universities of Bath and Portsmouth.

"This was a large, and very heavily constructed animal," Dr. Nick Longrich, who led a study from the Milner Centre for Evolution at the University of Bath, said in a statement. "The bones are thick-walled and massive. It clearly didn’t hunt small prey, but animals as large or larger than itself."

The velociraptor’s ancient relative died and lay buried until 2004 when storms and waves eroded away the rocks that had kept it hidden. Green discovered the remains that year but "didn’t appreciate the importance of his find" until he was forced to stop collecting fossils in 2012 due to bad health.

Instead, Green started focusing on pulling the dinosaur bones free from the hard ironstone surrounding them.

"One day, chatting over a beer, he showed the fossils to Isle of Wight paleontologist Megan Jacobs and Dr. Longrich, who puzzled over them, and at first struggled to make sense of them, until they noticed tell-tale similarities to other raptors," according to the statement from the University of Bath.

Green allowed the bones to be studied, and more than a decade after their discovery, scientists learned that it was a new genus and species. The findings were published on Dec. 21 in the journal Cretaceous Research.

The bones have since been donated to the Dinosaur Isle Museum at Sandown on the Isle of Wight, which is located on the English Channel.

Velociraptors were feathered animals and likely hunted solo—using their claws, according to National Geographic. Most scientists today conclude that modern birds descended from a group of two-legged dinosaurs, known as theropods, which include Tyrannosaurus rex and velociraptors.

However, velociraptors’ arms were too short for flying and its wishbone, located between the neck and breastbone, wasn’t the right shape to support flapping wings.

"This family connection explains why velociraptors had many traits found in modern-day birds, including their hinged ankles, swivel-jointed wrists, wishbones, and forward-facing toes. Most notable, though, was their plumage," National Geographic writes.

Adding to the link between the prehistoric creatures and modern birds, a separate team of researchers recently announced the discovery of a well-preserved fossil of a dinosaur egg, revealing the embryo in a posture known as tucking. Although it’s previously unrecognized in dinosaurs, it’s far more common among embryos of modern birds.

"Baby Yingliang" is a well-preserved fossilized dinosaur egg that has given scientists another link between prehistoric creatures and modern birds. (Credit: Yingliang Stone Nature History Museum via Storyful)

Researchers said this new relative of the velociraptor would have been a threat both to smaller dinosaurs and juveniles of large dinosaurs.

"With strong arms and talons, it may have climbed trees like modern leopards," the statement said. "The heavy bones suggest an animal that relied less on speed and more on strength, and perhaps ambushes, to tackle its prey."

Longrich said the discovery underscores the diversity of dinosaurs that once roamed in this region.

"There’s an extraordinary diversity of dinosaurs known in England in the Cretaceous, and even after more than a century of study, we continue to find new species," he said.