Voters in some key swing states, including Arizona, to decide on voting access

All but lost in the shadow of major contests for U.S. Senate and governor, voters in some battleground states will be deciding ballot proposals this November that could reshape the way they vote in the next presidential election.

In Arizona, the scene of the closest presidential contest in 2020, the question is whether to require more identification to vote in the future. In Michigan, another swing state, voters will consider whether to make it easier to cast early ballots.

Voting-related proposals will be on the ballot in several other states, including a measure to adopt ranked-choice voting in Nevada that — if approved this year — would need a second vote in 2024 to take effect."

Most of the measures are garnering little attention but could have profound effects on voting in some of the most politically competitive states for years to come. They mark an escalation of what voting expert Jon Sherman describes as "the voting wars" — battles between Democrats, Republicans and activist groups over laws specifying how people register, obtain mail-in ballots, prove their identity and cast ballots.

"The parties and their allies are fighting over every last voting rule and trying to make predictions about how they think it will help or hurt their chances of winning, particularly in closely competitive states," said Sherman, litigation director and senior counsel at the Fair Elections Center, a nonprofit that advocates for voting access.

Efforts to change voting laws ramped up after the 2000 presidential election, when a U.S. Supreme Court decision in Florida’s exceptionally close race gave Republican George W. Bush the victory over Democrat Al Gore. It intensified after the 2020 election, as Republican President Donald Trump refused to acknowledge his loss to Democrat Joe Biden while pressing false claims of widespread fraud, and some Republican-led states responded by passing restrictive voting laws.

Arizona, which Biden won by about 10,500 votes, was one center of controversy. After a six-month review focused on Arizona’s largest county, a Trump friendly firm hired by Republican state lawmakers ended up with vote results confirming Democrat Biden’s victory. 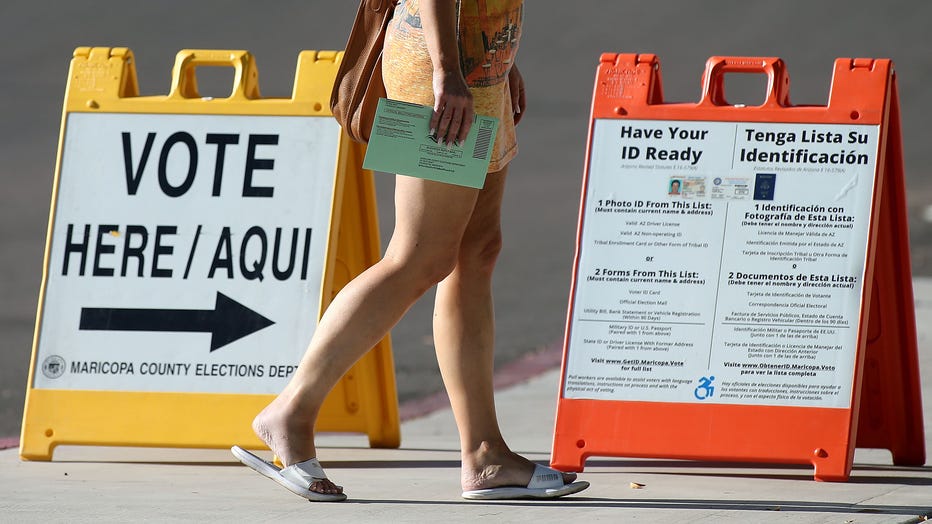 PHOENIX, AZ - AUGUST 28: An Arizona voter carries her ballot to a polling place to vote in the state's Primary on August 28, 2018 in Phoenix, Arizona. The state of Arizona has Senate primary day elections as voters decide between former State Senator

Republicans who control the Legislature subsequently placed a proposed constitutional amendment on the November ballot that would strengthen voter identification laws. It would require people voting in person to show a photo ID, and eliminate a current alternative of providing two documents bearing a person’s name and address, such as a recent utility bill and bank statement.

People voting with mailed ballots — the vast majority in Arizona — would have to list their date of birth and either their driver’s license number, a state identification number or the last four digits of their Social Security number.

Republican state Sen. J.D. Mesnard, who sponsored the measure, said the intent is to "make the election as secure as possible" while addressing "a growing crisis in confidence" that could discourage some people from voting.

But rather than reassuring voters, tougher ID requirements could dissuade some from voting at all and actually lead to fraud by exposing personal information, said Darrell Hill, policy director of the American Civil Liberties Union of Arizona, which opposes the measure.

Only a few states — Georgia, Minnesota, Ohio — have similar proof-of-identity measures for mailed ballots, according to the National Conference of State Legislatures. Arkansas requires voters to provide a copy of a photo ID when returning a mailed ballot.

In Michigan next month, a ballot initiative would preempt Republican attempts to tighten photo identification laws by amending the state Constitution to include the current alternative of signing an affidavit. It also would expand early voting options, require state-funded return postage and drop boxes for absentee ballots, and specify that the Board of State Canvassers has only a "clerical, nondiscretionary" duty to certify election results.

Trump allies had tried to persuade canvassers to delay certifying the 2020 results.

The goal of the new initiative is to "enhance the integrity and security of the elections by sort of modernizing how they’re administered and making them more accessible," said Khalilah Spencer, president of Promote the Vote, which backs the measure.

On the other side, Michigan Republican Party spokesman Gustavo Portela said the initiative "opens the door up for fraud" through the combination of early voting and a constitutional exception to showing photo ID.

Supporters in Connecticut hope this time is different — both because the new version is more clearly written and because the vote comes after the coronavirus pandemic heightened awareness about early voting.

"The idea that everybody has free time on a Tuesday between 6 a.m. and 8 p.m. -- and that’s their only opportunity to participate in our democracy -- is a little dated," said Democratic state Sen. Mae Flexer, co-chair of the Connecticut legislative committee that sponsored the measure.

In Nebraska, Republicans haven’t been able to get a voter photo ID bill through the nonpartisan Legislature. But it will appear on the November ballot, thanks to an initiative petition drive bankrolled by Marlene Ricketts, the mother of term-limited Republican Gov. Pete Ricketts.

MORE: Political campaigning in Arizona heats up as Trump holds a rally for Republicans, Democrats meet with voters

Civic Nebraska, a voting rights group opposed to the measure, describes it as "a solution in search of a problem."

"There’s not an iota of evidence in Nebraska that says we would need this extra step" to vote, said Civic Nebraska spokesman Steve Smith.

Gov. Ricketts acknowledged during a recent radio call-in show that there hasn’t been much election fraud. But he said, "one of the things that came out of the 2020 election is that people had a concern about the integrity of our voting systems."

There is no evidence of widespread fraud in the 2020 election. Judges have turned away dozens of challenges by Trump and his allies, multiple state reviews have confirmed the results, and Trump’s own Department of Justice concluded the election outcome was accurate.

Nevada’s proposed constitutional amendment would advance the top five vote-getters in an open primary. It then would use ranked-choice voting to determine the winner of the general election. If no candidate received a majority on the first count, the votes for the bottom candidate would be reassigned to voters’ next preferences until one candidate has a majority.

A similar system already exists for some elections in Maine, where Republicans have opposed it. Ranked-choice voting also began this year in Alaska. Former Republican Gov. Sarah Palin derided it as "crazy, convoluted, confusing" after losing a special election for U.S. House in August.

Nevada’s ranked-choice initiative has been opposed by majority Democrats, including Gov. Steve Sisolak, who said it "would make our system confusing, error-prone, and exclusionary."