PHOENIX - Three candidates for the Arizona Senate seat that is up for election in November took part in their one and only debate on the night of Oct. 6.

Kelly, a retired astronaut and Navy pilot, was elected in 2020 to finish the remainder of the late Sen. John McCain’s term and is now running for a full six-year term. Kelly has worked to build a reputation as a moderate willing to work with Republicans.

Masters, a venture capitalist who's heavily supported by former President Donald Trump, says he wants to protect Social Security for older and middle-aged workers while creating a private investment option for younger workers. He also says federal law should ban abortion later in pregnancy and allow states to go further. He has not disavowed his comments on the 2020 election but now talks about ensuring the integrity of future elections.

Masters endeared himself to many GOP primary voters with his penchant for provocation and contrarian thinking. But since then, he has struggled to redefine his image for the more moderate swing voters he will need to win in November.

The Arizona race is one of a handful of contests that Republicans targeted in their bid to take control of what is now a 50-50 Senate, though they have curtailed spending since Masters emerged from the bruising primary.

The debate comes less than a week before early and mail voting begins, the methods chosen by at least 80% of voters in recent elections. A newly released CBS News and You.gov poll shows the race is close. It has Mark Kelly at 51% of voters and Blake Masters 3 points behind at 48%. That's within the margin of error, which is 3.8%.

Prior to the debate, political analyst Chuck Coughlin weighed in.

"It'll be interesting to see how they shaped the debate towards what they want to talk about, and Masters has a lot to gain. This is a big opportunity for him," said Coughlin. "It's the only public debate, so perception-wise, in at least polling data-wise and what's out there, is Masters seems to be trailing a well-funded, incumbent US Senator. And so he has he's got to make up some ground tonight."

Sen. Kelly distances himself from President Biden, while Masters walks back from more hardline positions

During the debate, Sen. Kelly distanced himself from President Joe Biden on Thursday, calling the U.S.-Mexico border "a mess" and saying his party doesn’t understand border issues.

"When I got to Washington, D.C., one of the first things I realized was the Democrats don’t understand this issue," Sen. Kelly said. "And Republicans just want to talk about it, complain about it but actually not do anything about it. They just want to politicize that."

He pointed to his opposition to Biden’s plans to end a pandemic-era program that allows for the speedy removal of immigrants in the name of public health.

On defense over an issue that Republicans have made a central plank of their bid to take the Senate majority, Kelly said he’s stood up to his party when necessary to stem the flow of illegal immigration and drug trafficking.

"When the president decided he’s going to do something dumb on this and change the rules, that would create a bigger crisis, I told him he was wrong," Sen. Kelly said.

For Masters, the debate was a chance for a reset in his first political campaign, with polls showing he’s trailing Kelly in a race that could help determine party control of the Senate. Kelly, seeking his first full term in office and cognizant of Biden’s faltering approval ratings, sought to portray himself as an effective senator who was working for solutions on the country’s immigration problem and Americans’ economic worries.

During the debate, Masters tried to pierce Kelly’s image as an independent moderate willing to work across the aisle. Kelly has failed to use his leverage to secure the border and is responsible for rising prices that are forcing families to make tough decisions, he said. The Phoenix metro area has been the hardest hit by inflation, according to an analysis by the personal finance website WalletHub.

"Two years ago Mark Kelly stood right there and he promised to be independent," Masters said in his opening statement, calling Kelly a reliable vote for Biden’s agenda. "But he broke that promise."

Masters, a protégé of billionaire investor Peter Thiel, was endorsed by former President Donald Trump, who cited the candidate’s strident support of his lies about a stolen 2020 election. On Thursday night, Masters tried to pivot away from claims of a rigged election and instead blamed Trump’s loss on a conspiracy among powerful institutions.

Masters repeated his claim that the 2020 election was manipulated by institutions like the media and big tech firms but, under repeated questioning, acknowledged that he hasn’t seen evidence that the vote count or election results were manipulated, as Trump has claimed. Numerous federal and local officials, a long list of courts, top former campaign staffers and even Trump’s own attorney general have all said there is no evidence of the fraud he alleges.

"I suspect President Trump would be in the White House today if big tech and big media and the FBI didn’t work together to put the thumb on the scale to get Joe Biden in there," Masters said, claiming institutions conspired to bury news stories about material on a laptop owned by Hunter Biden, the president’s son.

Masters, trying to back away from some of the hard-line positions he took during the bruising GOP primary, said there should be some limits on abortion but not a national ban, conceded after a few prompts that Biden was the legitimately elected president and acknowledged that he hadn’t seen evidence the 2020 vote count was rigged.

During the primary, Masters called for privatizing Social Security, took a hardline stance against abortion and promoted a racist theory popular with white nationalists that Democrats are seeking to use immigration to replace white people in America. Donald Trump endorsed Masters two months before the primary, citing Masters’ strident support of the former president’s lies about a stolen 2020 election.

Masters later scrubbed some controversial positions from his website. He now says he wants to protect Social Security for older and middle-aged workers while creating a private investment option for younger workers.

On abortion, Masters said he’s "pro-life as a matter of conscience" and believes states should be able to set their own laws on terminating pregnancies, but said he’d support legislation banning it after 15 weeks gestation. He portrayed his own position as moderate and claimed Kelly supports abortion without limits.

Masters called abortion "demonic" during the GOP primary and called for a federal personhood law that would give fetuses the rights of people.

Kelly said abortion should be personal decisions and said he supports limits from Roe v. Wade, the U.S. Supreme Court decision overturned last summer that guaranteed a right to an abortion.

"I think we all know guys like this, guys that think they know better than everyone about everything," Kelly said, turning to Masters. "You think you know better than women and doctors about abortion."

More on the 2022 Midterm Election: 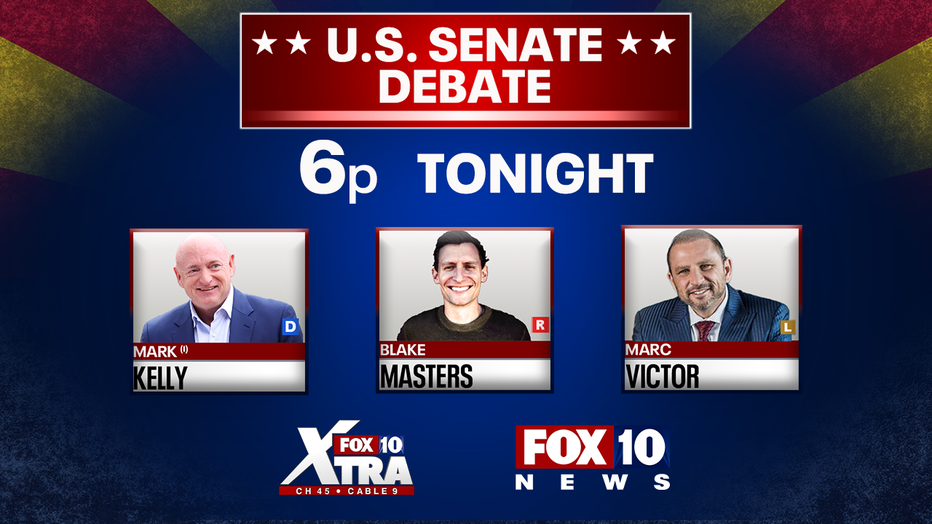