During commencement on May 29, 2021, the president of Wilberforce University announced to 2020 and 2021 graduates that their debt and other fines and fees owed to the university had been cleared.

WILBERFORCE, Ohio - Wilberforce University, the nation’s oldest private, historically Black university located in Ohio, announced that it will cancel student debt owed to the university for its 2020 and 2021 graduates.

During commencement on Saturday, the president of the university announced to the new alumni that their debt and other fines and fees owed to the university had been cleared — totaling more than $375,000, according to a news release.

"As these graduates begin their lives as responsible adults, we are honored to be able to give them a fresh start by relieving their student debt to the university, President Elfred Anthony Pinkard said in a statement.

The initiative does not cover federal, bank or other personal loans taken by the student, but covers tuition balances and fees being paid directly to the university by students or their families, the university said. The debt is being covered from various scholarships, such as the United Negro College Fund, Inc., Jack and Jill, Inc., and other institutional funding.

Graduating students were seen jumping from their seats, clapping and cheering, as Pinkard made the announcement.

"I couldn’t believe it when he said it. It’s a blessing," Wilberforce 2021 graduate Rodman Allen said. "I know God will be with me. I’m not worried. I can use that money and invest it into my future." 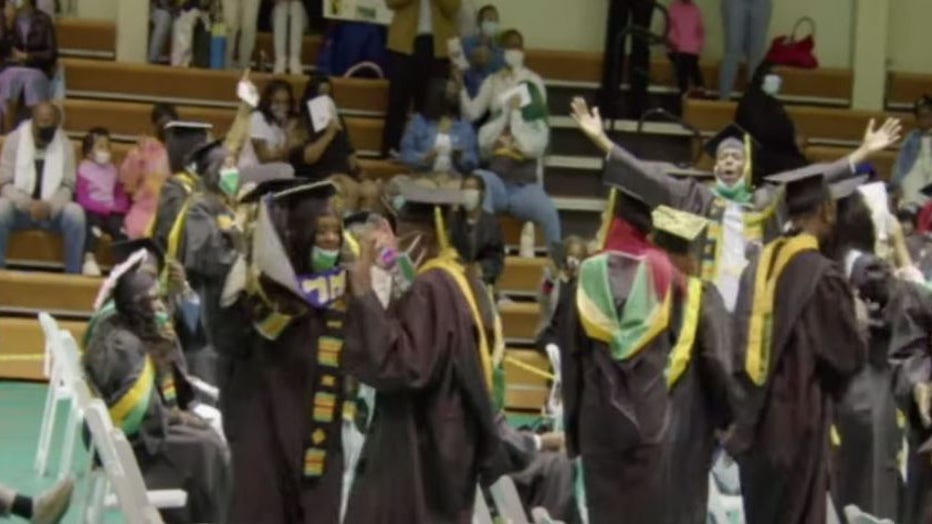 Graduates are seen cheering after President Elfred Anthony Pinkard announced the university would forgive debt owed for 2020 and 2021 students on May 29, 2021, in Wilberforce, Ohio. The initiative does not cover federal, bank or other personal loan t

In the spring of 2020 during the onset of the COVID-19 pandemic, financial aid was given to Wilberforce students whose bursar office balance would have prohibited them from registering for the upcoming fall classes. The funding was provided through the Higher Education Emergency Relief Fund (HEERF), set up through the CARES Act, the university said.

Wilberforce University, located about 60 miles northeast of Cincinnati, was founded in 1856 and named to honor the 18th-century abolitionist William Wilberforce. It is the country’s oldest private, historically Black university that is owned and operated by African Americans.

Tuition and fees run to about $13,250 per year, according to its website.