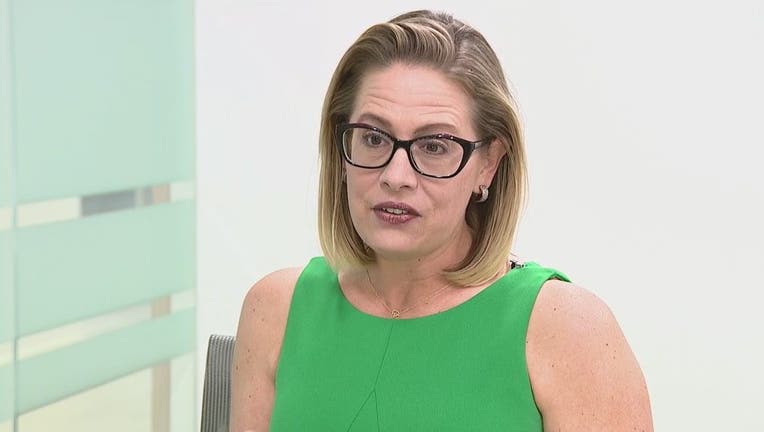 WASHINGTON - More than for her shock of purple hair or unpredictable votes, Democratic Sen. Kyrsten Sinema is perhaps best known for doing the unthinkable in Washington: She spends time on the Republican side of the aisle.

Not only does she pass her days chatting up the Republican senators, she has been known to duck into their private GOP cloakroom — absolutely unheard of — and banter with the GOP leadership. She and Senate Republican leader Mitch McConnell talk often by phone.

Sinema’s years in Congress have been a whirlwind of political style and perplexing substance, an antiwar liberal-turned-deal-making centrist who now finds herself at the highest levels of power. A key negotiator of the bipartisan infrastructure compromise, she was among those President Joe Biden first called to make the deal — and then called upon again as he worked furiously to salvage the agreement from collapse. A holdout to changing the Senate’s filibuster rules, she faces enormous pressure to act as voting rights in her own state and others hang in the balance.

"If anybody can pull this off it’s Kyrsten," said David Lujan, a former Democratic colleague of Sinema’s in the Arizona statehouse. "She’s incredibly smart, so she can figure out where people’s commonalities are and get things done."

The senator’s theory of the case of how to govern in Washington will be tested in the weeks ahead as Congress works to turn the infrastructure compromise into law and mounts a response to the Supreme Court decision upholding Arizona’s strict new voting rules.

She is modeling her approach on the renegade style of the late Sen. John McCain, the fellow Arizonan she strives to emulate, but aspiring to bold bipartisanship is challenging in the post-Trump era of hardened political bunkers and fierce cultural tribalism. Many in her own party scoff at her overtures to the GOP and criticize her for not playing hardball.

Her name is now uttered alongside West Virginia’s Sen. Joe Manchin as the two Democrats standing in the way of changing the filibuster rules requiring 60 votes to advance legislation — a priority for liberals working to pass Biden’s agenda in the split 50-50 Senate. This year she cast a procedural vote against raising the minimum wage and has opposed the climate change-focused Green New Deal, even though she’s not fully opposed to either policy. She declined a request for an interview.

"It’s the easiest thing in the world for politicians to declare bipartisanship dead and line up on respective sides of a partisan battle," she said in a statement to The Associated Press. "What’s harder is getting out of our comfort zones, finding common ground with unlikely allies, and forming coalitions that can achieve durable, lasting results."

Sinema arrived in Washington with a burst of energy and a swoosh of fashion. She quickly became known as one of the best vote counters in the House, on par with Speaker Nancy Pelosi, because of her visits to the other side of the aisle. She voted against Pelosi more than once for speaker.

Her maiden speech in the Senate drew from McCain’s farewell address, a marker of where she was headed. She changed the decades-old Senate dress code by simply wearing whatever she wants — and daring anyone to stop her. The purple wig was a nod to the coronavirus pandemic’s lockdown. (In off hours, she has been spotted wearing a ring with an expletive similar to "buzz off.")

"People may debate her sincerity, but the truth is, she makes an active decision that she’s going to work well with other people — and I haven’t seen her slip up," said Republican Rep. Patrick McHenry of North Carolina, who served with her in the House.

Sinema’s status as a bipartisan leader fascinates those who’ve watched her decades-long rise in Arizona politics, where she began as a lonely left-wing activist who worked for Ralph Nader’s 2000 Green Party presidential campaign and then slowly retooled herself into a moderate advocate of working across the aisle.

"Ideologically, it does surprise me," Steven Yarbrough, a Republican who served 12 years with Sinema in the Arizona legislature, said of her transformation. "But given how smart and driven she is, well, that doesn’t surprise me at all."

That Sinema even made it that far seemed improbable. Her parents divorced when she was young, and she moved with her mother and stepfather from Tucson to the Florida panhandle, where she lived in an abandoned gas station for three years.

Driven to succeed, she graduated from the local high school as valedictorian at age 16 and earned her bachelor’s degree from Brigham Young University in Utah at age 18, leaving the Church of Jesus Christ of Latter-day Saints, in which she’d been raised, after graduation.

Sinema landed in Phoenix, where she earned several more degrees — including a law degree and a doctorate — worked as a social worker and then a lawyer, vociferously protested the Iraq War and fought for immigrant and LGBTQ rights at a time when Arizona was veering right. In 2004 she was elected to the state legislature representing a fairly liberal area and initially was a backbencher who lobbed rhetorical bombs from the left.

But Sinema has written and spoken extensively of how she discovered the merits of moderation while serving in the GOP-controlled state legislature. She wrote a book titled "Unite and Conquer" about the need for leftists to compromise and cut deals.

In 2006, she co-chaired a bipartisan group to fight a gay marriage ban on the ballot and had to decide whether to simply condemn the ban or try to defeat it, said Steve May, the Republican former state lawmaker who collaborated with her.

An avid consumer of polling, she helped hit upon a strategy of targeting older, retired heterosexual couples who could also lose benefits under the ballot measure due to their unmarried status. They narrowly succeeded in defeating it. (Another ban passed two years later.)

"She came from doing speeches and leading protests, and she learned she can actually win," May said.

When a congressional seat opened up in a bluing stretch of Phoenix’s eastern suburbs, Sinema ran and won.

She had remade herself into the ideal candidate for a state that was slowly becoming competitive. And in 2018, she seized the moment, winning the open Senate seat.

Her infrastructure work is only one of several bipartisan "gangs" in the Senate where she is testing her theory of governance. She is about to roll out a minimum wage proposal with Republican Sen. Mitt Romney of Utah and is involved with others on immigration law changes.

"Kyrsten is always honest and straightforward, two often underrated qualities that are the mark of a successful legislator," said Sen. John Thune, the South Dakota Republican whip, who is among those Sinema often seeks out for conversation.

In a statement to the AP, Thune said that "while we certainly don’t see eye-to-eye on every issue," he trusts that she is transparent with him, and he respects her "sincere pursuit of bipartisanship."

Charming and funny in private conversations, Sinema prides herself on competing in marathons and triathlons, while maintaining a notoriously colorful wardrobe — even in her Green Party days, she referred to herself as a "Prada socialist."

Dashing from the Senate recently, she brushed off reporters’ questions about the infrastructure talks. On that day she wore a faux tuxedo bib dress paired with a suit jacket. Why?

She does what she wants, she suggested, by way of a shrug, before she climbed into a waiting car.