Arrest made during 'end the filibuster' rally outside Sen. Sinema's office in Phoenix

Protesters at the event are calling for the end of a US. Senate rule that effectively requires 60 votes to pass many legislations. Phoenix Police officers arrested 10 people in connection with the protest. FOX 10's Justin Lum reports.

PHOENIX - A number of arrests were made by police in connection with a demonstration that took place in the area of Democratic Senator Kyrsten Sinema's office in Phoenix on June 22.

According to a statement released by Phoenix Police, the demonstration took place at a business complex in the area of 33rd Street and Camelback in Phoenix. According to Sen. Sinema's website, her Phoenix office is located in the area.

Police officials say the group was asked to leave by the property's manager, who told detectives that the group was interfering with normal business operations. Detectives later spoke with the organizers of the demonstration, who cooperated with detectives. A smaller group of 10 people, however, remained on the property.

"Officers made announcements over loudspeaker asking the group to leave the premises. Additionally, detectives approached each individual and personally told the demonstrators to leave. However, the group continued to ignore the officers' requests," read a portion of the statement.

The 10 people, according to police officials, were arrested without incident shortly after 11:00 a.m. None of the people arrested were identified by police, since they were issued citations rather than detained. 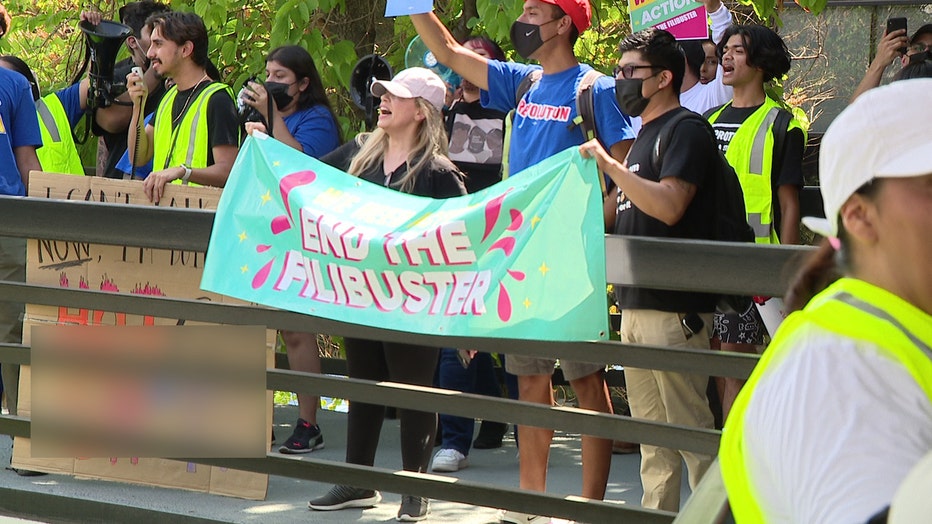 According to officials with the Arizona Coalition to End the Filibuster, the protest was organized over Sen. Sinema's stance on the Senate's filibuster powers.

"Hey hey, ho ho, the filibuster's got to go," protesters were heard chanting.

"Arizonans and Americans want Congress and Senate to do their jobs and pass legislation to actually solve problems. It's more important than preserving an archaic Senate rule that's a relic of Jim Crow," said Kai Newkirk with the For All Organization.

"I understand and know Kyrsten. I remember Kyrsten Sinema when she used to come outside the State Senate and stand on the crate and talk about how we need to stand up to SB1070 and any type of law that's threatening our civilians and our residents that live here. I remember Kyrsten Sinema as a mentor and civic engagement training where I used to hang on to her every word, and now I take it all back," said activist Channel Powe.

Sen. Sinema has announced that she supports the For The People Act, saying it "restores safeguards that protect every American's right to vote, reduces the influence of money in politics, secures our elections from foreign interference, and holds government officials to the highest ethical standards."

The Senate failed to get the 60 votes needed to have a debate on the bill on June 22.

Related: For the People Act: Voting rights bill fails to advance in Senate

Sen. Sinema details her opposition to end the filibuster 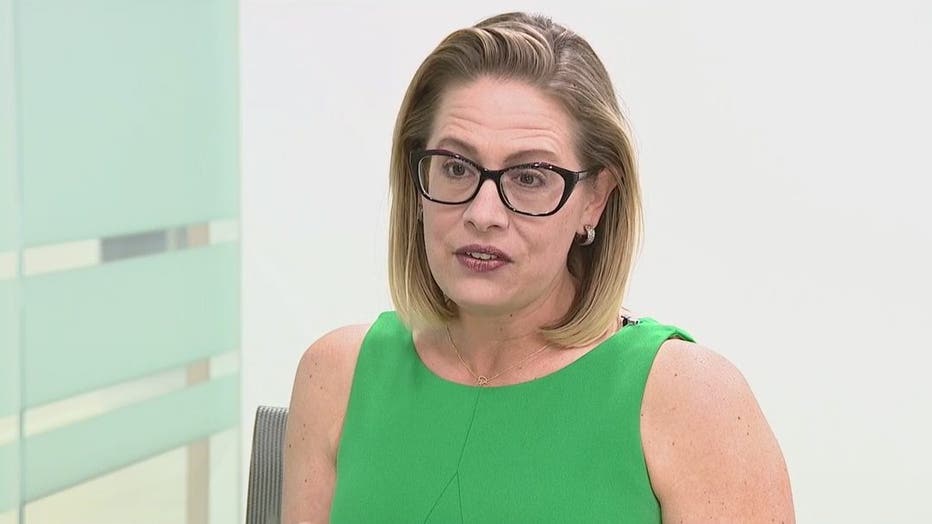 In an editorial published by the Washington Post, Sen. Sinema wrote that it is "no secret" that she opposes eliminating the filibuster, and has consistently opposed it during her time in the House. She said the filibuster was used in 2020 on a police reform bill, and a COVID-19 relief bill that many Democrats viewed as not enough.

"Those filibusters were mounted not as attempts to block progress, but to force continued negotiations toward better solutions," Sen. Sinema wrote, in the editorial.

Sen. Sinema went on to write that the filibuster "compels moderation," and "helps protect the country from wild swings between opposing policy poles." She also wrote that it is time for the Senate to debate the filibuster, so that "senators and our constituents can hear and fully consider the concerns and consequences."

Sen. Sinema's stance on the filibuster has been criticized by others.

In early June, President Joe Biden made what some reports say was a veiled reference to Sen. Sinema during a speech.

When responding to a critic who questioned why he hasn’t been able to get a wide-reaching voting rights bill passed, President Biden said, "Well, because Biden only has a majority of effectively four votes in the House, and a tie in the Senate — with two members of the Senate who voted more with my Republican friends."

Sen. Sinema's editorial was also criticized by the Democratic Party in Coconino County, who said in a tweet that the editorial is the "female version of mansplaining to her ‘everyday Arizonans,’ otherwise known as her constituents."

Democrats say opposing the filibuster means legislations that aim to protect the rights of LGBTQ+ Americans, as will as bills that aim to expand voting rights and reform campaign finance ethics, will be blocked.