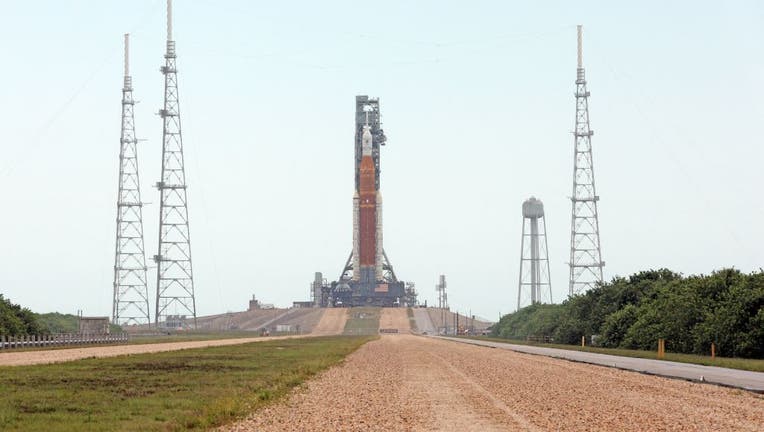 A view from the crewler-way of the massive Artemis I Space Launch System rocket and Orion spacecraft at Launch Pad 39B after rolling out from the Vehicle Assembly Building for a second time at the Kennedy Space Center in Florida on June 6, 2022. (Pho

On Monday, NASA conducted a wet dress rehearsal of the Space Launch System rocket and Orion spacecraft at Kennedy Space Center launchpad 39B. It was the fourth attempt to fuel the rocket with 750,000 gallons of super-cold fuel and run through the countdown as a dress rehearsal for the actual Artemis-1 test launch later this year.

After reviewing the data from the rehearsal, NASA declared the testing campaign complete. In early July, the SLS and Orion spacecraft will be rolled back to the Vehicle Assembly Building, where teams will prepare the 32-story vehicle for launch.

"We still believe that we're at the end of the August timeframe, that that's still on the table," NASA deputy associate administrator of the Exploration Systems Development Division Tom Whitmeyer said.

NASA, SpaceX Crew-4 astronauts successfully launched on a falcon 9 rocket from NASA's Kennedy Space Center in Cape Canaveral, FL for the fifth crewed flight to the ISS with NASA's commercial crew program. Crew-3 astronauts will pass the torch to them before returning to earth. According to SpaceX, the crew will conduct more than 200 science experiments to prepare for further human exploration.

After work is complete on the SLS back in the rocket hangar, Whitmeyer said NASA's senior leader would set a launch date.

The upcoming launch window from Aug. 23 to Sept. 6 is based on the alignment of the Earth and moon, among other criteria. NASA posted a list of all the launch windows through the end of the year.

When the Artemis-1 test launch does happen, SLS will launch the Orion spacecraft without astronauts to the moon. The spacecraft will orbit the moon before returning to Earth, splashing down in the Pacific Ocean. Following the test flight, NASA will launch astronauts on Orion on a similar orbital test flight.

This lays the groundwork for landing humans back on the moon by 2025.

Weeks of work ahead before launch

Once back in the VAB, teams will get to work inspecting the vehicle, replacing a seal to address a hydrogen leak, loading Orion payloads and working on hardware and software preparations for launch.

NASA Exploration Ground Systems Program senior vehicle operations manager Cliff Lanham estimated 6 to 8 weeks of work lay ahead once the SLS is back inside the hangar.

WATCH LIGHTNING STRIKE NEAR A MASSIVE SPACE ROCKET IN FLORIDA

"It was even better than what I expected," Weber said. "What we found was that we only had 13 of the 128 commanded functions that we planned in terminal count that didn't get successfully accomplished."

Most of those objectives had previously been validated through testing before reaching the launchpad. Had it been launch day, Weber said teams hadn't found anything that would have stopped a liftoff.

The previous three wet dress rehearsal attempts were halted before the rocket was fully fueled due to several hardware issues, including a liquid hydrogen leak.

Monday's test successfully fueled the rocket with cryogenic liquid oxygen and liquid hydrogen propellants. However, another leak was discovered in a quick disconnect hydrogen line for the core stage requiring NASA to override launch computer alarms to get through the countdown during Monday's test.

"We brainstormed that and troubleshot and thought about it and then eventually got to the point, you know, where we were kind of burning daylight," Weber said. "So let's go ahead and bite the bullet. We'll close that bled valve and go ahead, and we can mask that in our ground launch sequencer."

When a measurement is masked, the launch computer is still monitoring it, but it won't stop the countdown, explained Weber.

The countdown halted at 29 seconds.

Hydrogen leaks were also a reoccurring problem for the Space Shuttle Program, leading to launch scrubs and delays over the 30-year program.

"Not my first rodeo on this one," Weber quipped about his experience chasing hydrogen leaks during the shuttle program.

NASA's SLS chief engineer John Blevins said decades of working with hydrogen as rocket fuel have allowed the team to make informed decisions on dealing with these problems as they crop up.