"He brings the energy, knowledge and appreciation of our state and university that is valued by all of us," Arizona State athletic director Ray Anderson said in a statement. "His knowledge of the current college football landscape, learned by coaching across the nation, is needed and wanted at ASU."

A Phoenix native, Dillingham returns to the school he graduated from 10 years ago in hopes of turning around a program that fired Herman Edwards in September after a 1-2 start. Arizona State also is facing an NCAA investigation for alleged violations of recruiting rules committed under Edwards.

Dillingham began his coaching career at Chaparral High School in Scottsdale, Arizona, before being hired as an offensive analysis by then-Arizona State coach Todd Graham in 2014.

He has served as offensive coordinator and quarterbacks coach at Memphis, Auburn, Florida State and Oregon.

"It is an honor and a privilege to be named the head coach at Arizona State University," Dillingham said. "This is a special place to myself and my wife who is also a graduate. I truly believe the team we will build here is one that the state of Arizona and all Sun Devils can rally behind and be proud of as it will take everyone in the valley to help this program achieve the level of success it is due."

Arizona State athletic director Ray Anderson took a calculated gamble in 2018 with the hiring of Edwards, a former NFL coach and TV analyst.

The loquacious coach won over Arizona State’s fan base his first couple of seasons, proving to be an adept recruiter while leading the Sun Devils to consecutive bowl appearances.

Arizona State couldn’t sustain the success on the field and the program fell into the NCAA’s crosshairs for hosting recruits on campus during an NCAA-mandated COVID-19 dead period in 2020.

Edwards was fired a day after the Sun Devils lost to Eastern Michigan of the Mid-American Conference as heavy home favorites. He went 46-26 in five seasons at Arizona State, including 17-14 in the Pac-12.

Running backs coach Shaun Aguano served as interim coach and went 2-7 to close out the season, including a loss to rival Arizona in the finale. 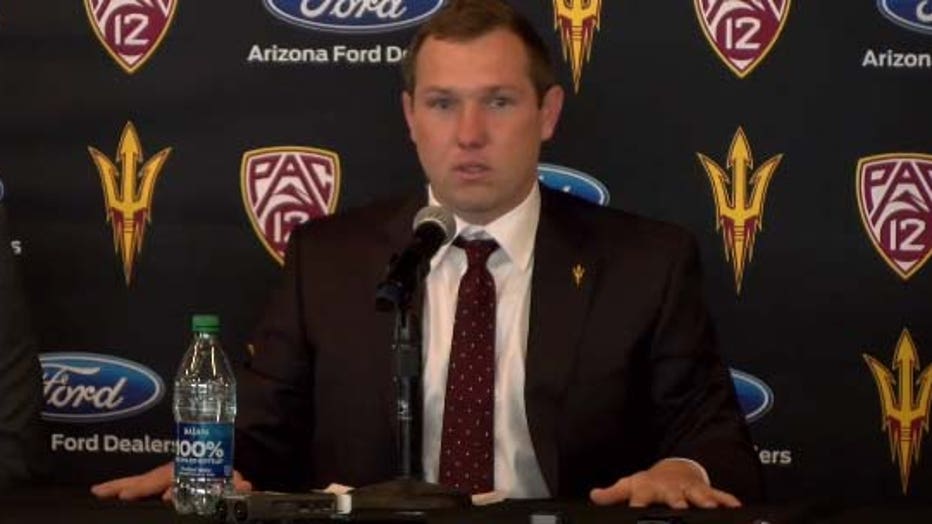