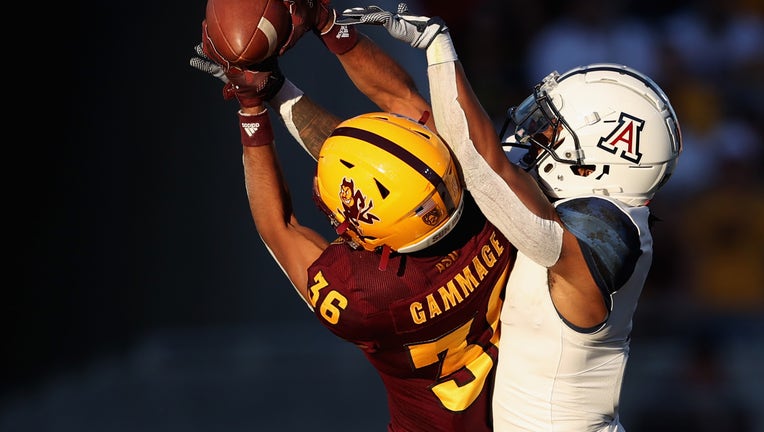 TEMPE, ARIZONA - NOVEMBER 27: Defensive back Alijah Gammage #36 of the Arizona State Sun Devils breaks up a pass intended for wide receiver BJ Casteel #5 of the Arizona Wildcats during the third quarter of the Territorial Cup game at Sun Devil Stadiu

The Sun Devils (8-4, 6-3 Pac-12) won in a blowout a year ago, but needed a big second half in the rematch to pull away. Daniels threw for two touchdowns and ran for a 48-yard score, sending Arizona State to its fifth straight win in the series.

The question is whether it will be enough to save coach Herm Edwards’ job.

The former NFL coach and TV analyst was tasked with turning Arizona State into an elite program and hasn’t been able to do it in four seasons. The NCAA also is investigating the Sun Devils for recruiting violations during the pandemic.

Arizona (1-11, 1-8) wanted a bit of revenge after losing 70-7 at home to Arizona State last season. The Wildcats moved the ball well in the first half and Will Plummer had a career day, throwing for 346 yards and a touchdown.

Arizona lost its payback bid by struggling in the red zone and with too many costly mistakes.

It started off well, with Plummer picking apart Arizona State’s defense throughout the first half.

The Wildcats are the worst team at converting red-zone opportunities into touchdowns and were at it again: three deep first-half drives, three field goals.

Plummer also was stripped on a sack that Arizona State’s Tyler Johnson recovered at Arizona’s 1. Rachaad White ran it in the next play to give Arizona State a 14-9 halftime lead.

Arizona State’s offense, which sputtered most of the first half, revved up quickly with Daniels’ scrambling, 48-yard TD run on the fourth play of the third quarter. He then hit Pearsall on a second 14-yard TD, this time a back-shoulder throw.

Arizona’s Michael Wiley turned 6-yard swing pass into a touchdown by fighting through two defenders to reach the pylon, but the Wildcats continued to get in their own way after that.

Jones sealed it by stepping in front of a receiver and returning the interception for an 87-yard touchdown.

Missed red-zone opportunities have plagued Arizona all season and played a big role again on Saturday.

Arizona State played well on both sides of the ball in the second half to pull away and win the biggest game on the schedule every year. Whether it’s enough to save Edwards’ job remains to be seen.

Arizona heads into the offseason with several underclassmen returning on offense, but will lose several key defensive players, including four players on their front seven.

Arizona State is headed to a bowl game for the third time in four seasons.