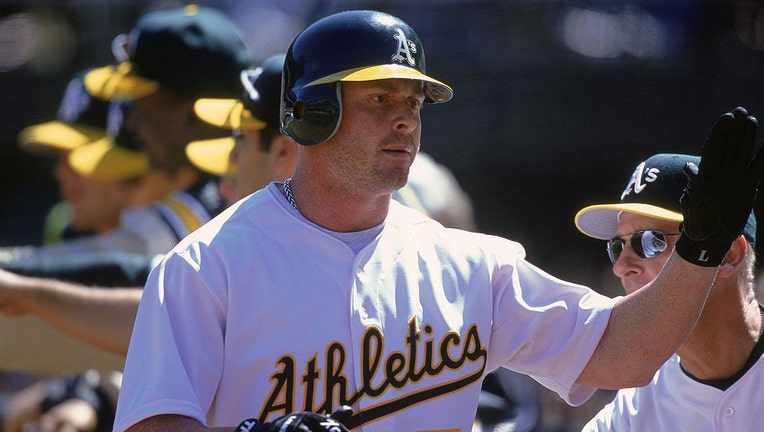 Jeremy Giambi #7 of the Oakland Athletics gives a high five during a game against the Chicago White Sox at the Network Associates Coliseum in Oakland, California. The Athletics defeated the White Sox. Jed Jacobsohn /Allsport/Getty Images

WASHINGTON - Former Major League Baseball player Jeremy Giambi's cause of death was suicide from a self-inflicted gunshot wound to the chest, according to the Los Angeles County Medical Examiner’s coroners report.

Giambi played in the major leagues between 1998 to 2003. He played for the Kansas City Royals, Oakland Athletics, Phillies and Boston Red Sox throughout his career.

Giambi played in the postseason twice with the Athletics and in 2001 was tagged out at home on Derek Jeter’s famous "flip" toss in the American League Division Series against the New York Yankees.

Born Sept. 30, 1974, in San Jose, he went to South Hills High in West Covina, then played for the California State University, Fullerton team that won the 1995 College World Series.

He signed with the Royals after the team selected him in the sixth round of the 1996 amateur draft. He was the younger brother of MLB All-Star Jason Giambi and the two played together while with the Oakland Athletics.

The Oakland Athletics confirmed the 47-year-old’s death on Wednesday.

"We are heartbroken to learn of the passing of a member of our Green and Gold family, Jeremy Giambi," the Oakland Athletics tweeted. "We offer our condolences to Jeanne, Jason, and his family and friends."

CLICK HERE https://afsp.org/risk-factors-and-warning-signs for the warning signs and risk factors of suicide. Call 1-800-273-TALK for free and confidential emotional support.

FOX11 Los Angeles and the Associated Press contributed to this story. This story was reported from Washington, D.C.