She attended a 3-on-3 basketball game with French President Emmanuel Macron, caught the back half of the women’s soccer team’s win over New Zealand and held a watch party for the softball team at the house of the U.S. ambassador.

But perhaps Saturday’s most notable moment came during her trip to the Tokyo Aquatics Centre. American swimmers greeted Dr. Biden with chants of her name and clapping.

"Thank you, thank you," she said as she politely waved back.

This is the second time Dr. Biden has represented the United States at the Olympics — the first coming in 2010 when she and then-Vice President Joe Biden, led the U.S. delegation to the Winter Games in Vancouver, Canada. 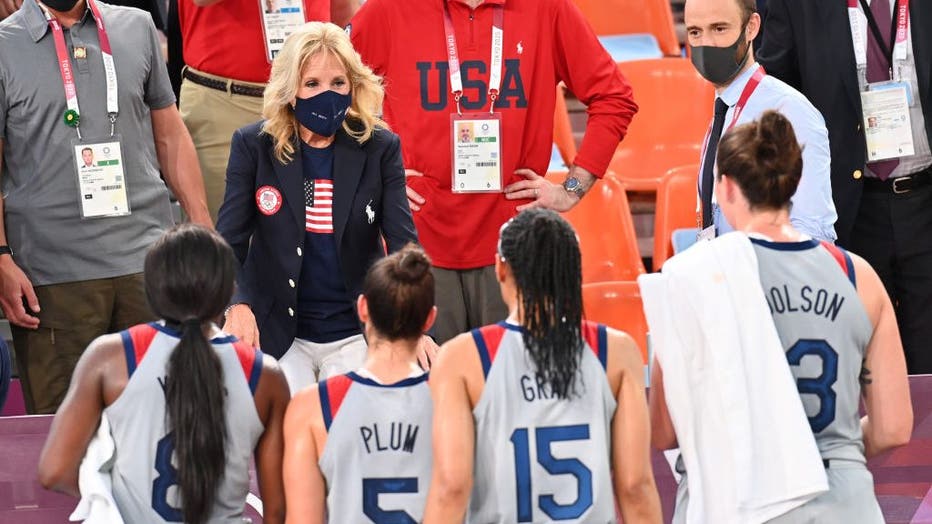 First Lady Jill Biden (C) congratulates US women 3x3 basketball team after the women's first round 3x3 basketball match between US and France at the Aomi Urban Sports Park in Tokyo, Japan on July 24, 2021. (Photo by Mustafa Yalcin/Anadolu Agency via

But it is the first time she has done so as the first lady, and it nearly didn’t happen. Had the COVID-19 pandemic not delayed the 2020 Games by a year, Melania Trump would have done the honors.

Hillary Clinton traveled to the 1994 Lillehammer Winter Games and the 1996 Atlanta Games.

Laura Bush led the delegation to the Turin Olympics in 2006. She also accompanied President George W. Bush to Beijing for the opening ceremonies of the 2008 Summer Olympics in China.

Michelle Obama led a delegation to the 2012 Summer Olympics in London.