Jeffrey Lurie said Doug Pederson is like family to him and it was a tough decision but it goes with the territory. Lurie added his first allegiance is what is best for the Philadelphia Eagles and fans.

PHILADELPHIA - The Philadelphia Eagles have parted ways with head coach Doug Pederson after a disappointing 4-11-1 season, the team announced on Monday.

Owner Jeffrey Lurie released a statement on the team's Twitter account explaining he believes it was "in both of our best interests to part ways."

"I have spent the last few weeks evaluating everything from this past year and looking ahead. We are all very disappointed with the way our season went and eager to turn things around, not just for next season but also for the future of the franchise," the statement began. "Coach Pederson and I had the opportunity to sit down and discuss what the collective vision would look like moving forward. After taking some time to reflect on these conversations, I believe it is in both of our best interests to part ways."

A short time after news of the split broke, NFL Network's Ian Rapoport cited two sources in reporting that Pederson was 'sick of people telling him what to do.'

Following a turbulent and disappointing season, some believed that Pederson would return for his sixth season in Philadelphia.

Over the weekend, ESPN reported that owner Jeffrey Lurie needed to be confident in Pederson's vision for the future in order to stick with the coach and the two were expected to meet again this week. 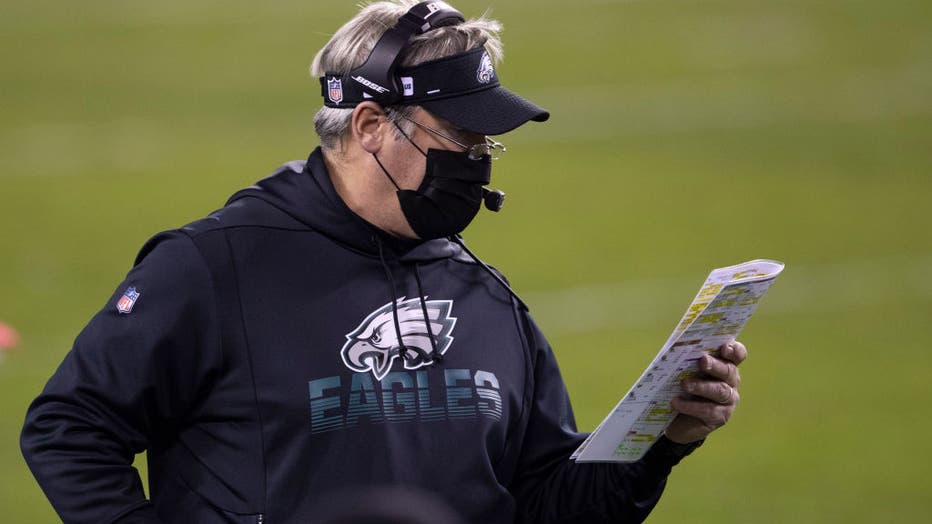 Head coach Doug Pederson of the Philadelphia Eagles calls a play against the New Orleans Saints at Lincoln Financial Field on December 13, 2020 in Philadelphia, Pennsylvania. (Photo by Mitchell Leff/Getty Images)

Lurie went on to say in his statement that Pederson and his family will "always be family to me" and that he has a great amount of respect for Pederson and everything they accomplished together.

"We look forward to the day he will be inducted into the Eagles Hall of Fame as a Super Bowl-winning head coach and we are confident he will have success with his next team," Lurie added.

Pederson released a statement of his own Monday afternoon, saying in part that it had been an "absolute honor serving as head coach of the Philadelphia Eagles.

"Thank you to Jeffrey Lurie for the opportunity, and to Howie Roseman and Don Smolenski for their partnership and support over the last five seasons. To all of our coaches, players, and staff, thank you for believing in me and allowing me to lead us on this journey. The memories made here together will always have a special place in my heart," Pederson's statement continued.

"To the City of Philadelphia, thank you for embracing me and this team. I truly appreciate the passion you bring every single day - at home, on the road, and in the community. No matter what, you were always right there with us," he added. "Although I am disappointed that this chapter of my career has come to an end, I am extremely proud of what we accomplished together. Through all the ups and downs, one thing remained constant about our team - an unwavering commitment to battle through adversity and achieve our goals not as individuals, but as a collective unit. There is no better example of that than when we celebrated the first Super Bowl Championship in Eagles history together with our city. That is a memory we will all cherish forever."

Pederson led the Eagles to three straight playoff appearances prior to this year; including the team's first Super Bowl win over the New England Patriots. He was hired in 2016 to replace Chip Kelly and has amassed a record of 42-37-1.

The team is 23-26-1, including playoffs, since the Super Bowl victory. Pederson had two years remaining on his contract.

Aside from the disappointing record, the Eagles also head into the offseason with questions around the quarterback position after Carson Wentz's regression.

Another issue the team faces is lack of talent on offense, defense and special teams. The team has drafted only one Pro Bowl player — Wentz — since 2014.

Howie Roseman, the Eagles Executive Vice President and General Manager, is expected to remain with the team and 2021 and will face a tough challenge in resolving those issues with a tough salary cap situation.