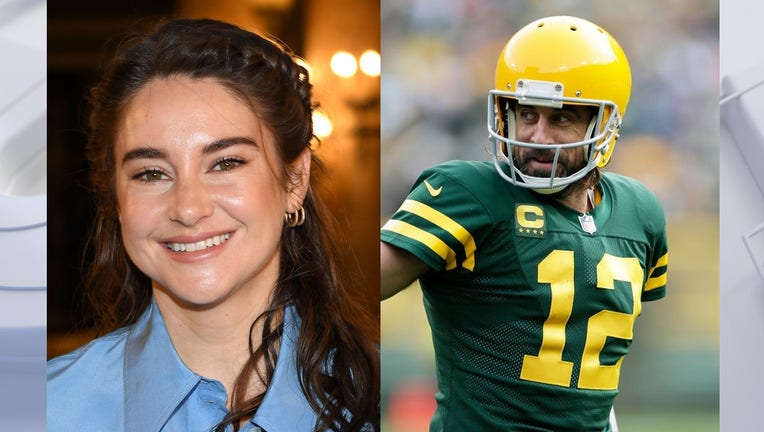 GREEN BAY, Wis. - Shailene Woodley is slamming news outlets for "disparaging" her fiancé Aaron Rodgers after the quarterback revealed he was unvaccinated.

On Tuesday, the actress took to her Instagram Stories where she criticized a report alleging the 37-year-old stepped out in Los Angeles following his COVID-19 diagnosis. The 29-year-old claimed Rodgers isn’t the masked man who was photographed by paparazzi.

"Literally ya'll need to calm the f--- down," Woodley wrote alongside the photos in question. "This is straight up HILARIOUS. News outlets STILL grasping at straws to disparage Aaron. Finding random f---ing men on the streets of LA and saying its him."

"I know Aaron's body VERY well," she continued. "First off his feet, ahem and no offense to this rando dude, are a LOT bigger. Also, for those of us who know Aaron beyond the worlds of obsessed sport and s---- media, it's no secret he has the hairiest hands on the f---ing planet. This oblivious homie. Clearly, does not (go ahead, zoom in)."

"Also, cute car dude, but Aaron would never drive this," she added.

On Nov. 9, a Wisconsin health care organization ended their nine-year partnership with the Green Bay Packers star after he detailed his reasoning for avoiding the three COVID-19 vaccinations endorsed by the NFL.

The statement said Prevea Health "remains deeply committed to protecting its patients, staff, providers and communities amidst the COVID-19 pandemic. This includes encouraging and helping all eligible populations to become vaccinated against COVID-19 to prevent the virus from further significantly impacting lives and livelihoods."

The move comes a day after Rodgers told "The Pat McAfee Show" he had sought alternative treatments to COVID-19 vaccination because he is allergic to an ingredient in two of the FDA-approved shots. Rodgers did not say what ingredient he was allergic to, or how he knows he is allergic.

Rodgers has strongly questioned the NFL’s COVID-19 protocols, along with any organization forcing health requirements on individuals.

"I believe strongly in bodily autonomy and the ability to make choices for your body, not to have to acquiesce to some woke culture or crazed group of individuals who say you have to do something," he said. "Health is not a one size fits all for everybody, and for me, it involved a lot of study in the offseason."

The COVID-19 vaccines authorized for use in the U.S. were tested in tens of thousands of people and proven to be both safe and effective at dramatically reducing the risk of serious disease and death, The Associated Press reported.

The outlet noted that the vaccines now have been given to more than 200 million Americans and that real-world use plus extra government safety tracking have made clear that serious side effects are extremely rare — and that any risk is far lower than the risks posed by COVID-19.

Rodgers, who has been tested daily as part of NFL protocols for unvaccinated players, found out he contracted COVID-19 on Wednesday. He must have a negative test to return to the team on Nov. 13.

The reigning NFL MVP, whose endorsement deals include a starring role in commercials for insurance company State Farm, hinted that his stance on vaccination could have consequences when he described himself as a victim of "cancel culture."