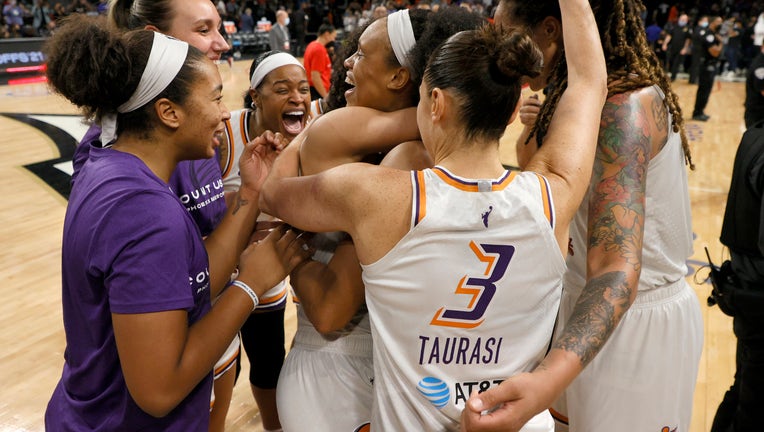 LAS VEGAS, NEVADA - OCTOBER 08: The Phoenix Mercury celebrate after defeating the Las Vegas Aces 87-84 in Game Five of the 2021 WNBA Playoffs semifinals to win the series at Michelob ULTRA Arena on October 8, 2021 in Las Vegas, Nevada.

LAS VEGAS (AP) - When Phoenix Mercury coach Sandy Brondello was asked what was the difference in the fourth quarter, she had a simple response: It was Diana Taurasi.

Taurasi scored 14 of her 24 points in the fourth quarter, and Brittney Griner had 28 points and nine rebounds to lead the Mercury past the Las Vegas Aces 87-84 in Game 5 of the semifinals Friday night to advance to the WNBA Finals for the first time since 2014.

"Diana making shots," Brondello said. "That’s what changed it. That gave us hope. I thought we played with pretty good poise. That comes from developing chemistry, but Diana Taurasi, that was pretty big."

Taurasi was 0 for 5 from 3-point range going into the fourth quarter with the Mercury trailing 66-58. The Aces, who were down 44-42 at halftime, used a 14-2 run to begin the third quarter for a 10-point lead, the largest of the game.

"We were in the huddle (going into the fourth) and we just yelled, ‘three possessions,’" Phoenix guard Skylar Diggins-Smith said. "People were saying, ‘chip away, chip away.’ We didn’t need to chip away. We were right there."

Aces guard Chelsea Gray responded with a 3 just 6 seconds later to tie it.

"I think that it’s a good learning experience for us, hopefully," Las Vegas coach Bill Laimbeer said. "They have two outstanding, mentally-strong players in Taurasi and Griner. They willed that onto their team. ... We need to acquire that trait. Whether it is we grow up, or whether we acquire something, but it’s something that this team has consistently lacked throughout the course of the year."

Gray and Kelsey Plum scored 22 points each for Las Vegas, and A’ja Wilson added 21 points and 10 rebounds. The Aces made the Finals last season in the Florida bubble before being swept by the Seattle Storm.

"Really hard to gather my thoughts right now. We were so close," said Plum, the league’s Sixth Player of the Year. "I wouldn’t want to do it with another group, and I do know we’ll be back. I have no doubt in my mind, and the result will be different."

Shey Peddy made two of three free throws with 4.8 seconds left to give the Mercury an 86-84 lead, and Griner added one from the line to close the scoring. Griner also had a block on Wilson with 0.7 seconds remaining to secure the win.

"Speechless," Griner said. "I’m just proud of the team. It doesn’t matter how you get it. We got the win."

Las Vegas outrebounded Phoenix 38-26. ... Aces center Liz Cambage had 10 points and 11 rebounds in 29:15, the most she’s played since returning to the lineup after testing positive for COVID-19.

The last time the Mercury reached the Finals, Griner was in her second season out of Baylor. She’ll get her second shot at a championship after showing signs of dominance in this series.

Griner averaged 25.6 points while shooting 62.7 percent in the three games in Las Vegas.

"I didn’t know anything from anything in my second year," the 30-year-old Griner said. "I learned a lot, grew up a lot. I learned so much from everyone that’s around me. Everything I do on the court, credit to my teammates, coaches. Hell, my wife even gives me breakdowns after games and stuff."

ONE MORE FOR TAURASI

One more championship will give Taurasi, 39, her fourth title and the fourth in Mercury history (2007, 2009, 2014). The Mercury would join the Houston Comets, Minnesota Lynx and the Storm as the only teams to win four championships.

"The G.O.A.T," said Diggins-Smith, who is looking for her first championship. "She did some G.O.A.T things tonight."

The Mercury will face the Chicago Sky in a rematch of the 2014 finals, the last time either team advanced that far. Game 1 is on Sunday.