With less than two weeks to go before the Arizona primary election, the former president, along with the former vice president, are supporting rival candidates for the GOP gubernatorial nomination in Arizona. FOX 10's Stephanie Bennett has more on the dueling rallies.

Previously, Trump was set to hold his rally on July 16, but that was postponed due to the death of Ivana Trump.

Taylor Robson is one of the frontrunners for the Arizona GOP gubernatorial nomination, and Pence's rally took place just days ahead of Arizona's primary election in August. FOX 10's Nicole Garcia reports.

During a rally in Peoria, Pence praised Karrin Taylor Robson's longstanding commitment to the GOP.

"No one worked harder for the Trump-Pence ticket than Karrin Taylor Robson," said Pence. "She's going to keep Arizona growing. She's going to secure the border. She's going to empower parents, create even better schools all across the state."

"I will be the conservative fighter Arizona needs, and I will not let you down. I ask for your prayers, your support, and your votes," said Taylor Robson.

Taylor Robson is a lawyer and housing developer who is locking up support from mainstream GOP figures growing increasingly comfortable with breaking from Trump. Her supporters also include former New Jersey Gov. Chris Christie and term-limited Gov. Doug Ducey, who famously silenced a call from Trump while certifying Democrat Joe Biden’s 2020 presidential victory in Arizona.

During the rally, Pence also talked up the successes of what he called the Trump-Pence administration, but did not directly address his growing feud with the former president as he urged voters to support Taylor Robson for governor.

If you elect Robson, Pence said, "you can send a deafening message heard all across America that the Republican Party is the party of the future."

The remark appeared to be an oblique critique of the Republicans still pushing the lie that Trump was the real winner in 2020, including Robson’s rival, Kari Lake, a former television anchor who has embraced Trump’s combative approach to his political enemies and the media.

Robson says the 2020 elections "weren’t fair," accusing "liberal judges" of changing the rules late in the cycle and the media and big tech of suppressing conservative voices. But she has stopped short of saying Trump lost because of fraud.

Pence highlighted Lake’s past support for Barack Obama’s presidential campaign and a "not my president" meme the then-news anchor posted as Trump prepared for his 2017 inauguration.

"You need a governor that’s supported every conservative cause from Ronald Reagan to Donald Trump," Pence said of Robson, who worked in the Reagan administration and raised money for Trump’s campaign along with her husband, housing developer Ed Robson, one of Arizona’s wealthiest residents.

Robson has also donated to Democrats.

According to an early July poll by OH Predictive Insights, Taylor Robson is narrowing the gap between her and Lake.

"My opponent has had a bit to say about me, particularly as our campaign has climbed in the polls and now that the momentum is ours," said Taylor Robson. "I don’t often recognize who she’s talking about."

Kari Lake, others speak at Trump event in Prescott Valley

Trump, meanwhile, held an evening rally in Prescott Valley on behalf of Lake and other candidates he has endorsed in Arizona’s Aug. 2 primary.

"You are going to elect a truly great woman who I have gotten to know very well. Kari Lake as your next governor," said Trump, during the rally.

"We got to have a strong governor to save this country and save this border," said Lake.

Temperatures reached nearly 103F on July 22 in the Prescott area, but that did not stop supporters from turning out. Some of the attendees traveled to the area from other towns and states.

Also Read: Arizona governor's race: A look at who's vying for the spot and their plans if elected 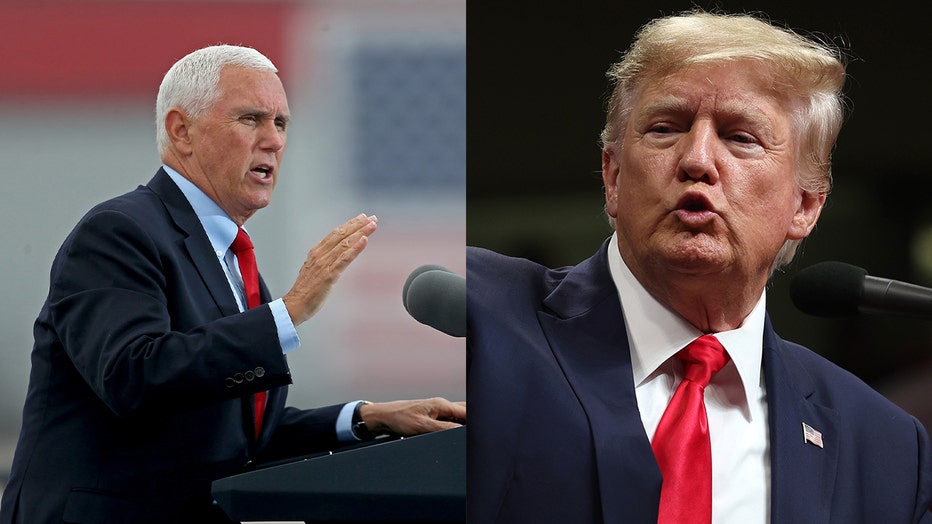 Trump and Pence have occasionally taken different sides in primaries this year, but this is the first time that they will have appeared in the same state on the same day to rally for their preferred candidates. The split-screen moment marks a more confrontational phase in their relationship as they both consider running for president in 2024.

It also comes just a day after the House Jan. 6 committee revealed new details about the violent insurrection at the U.S. Capitol that fractured the relationship between the two men. The committee recounted how Trump refused to call off the mob attacking the Capitol as Pence, just feet away from rioters, was whisked to safety.

The committee played audio from an unidentified White House security official who said Pence’s Secret Service agents "started to fear for their own lives" at the Capitol and left messages for their loved ones in case they didn’t survive. Shortly afterward, at 2:24 p.m. on Jan, 6, 2021, Trump tweeted that Pence didn’t have the "courage" to block or delay the election results as Congress was certifying Biden’s victory.

"Mike Pence let me down," an unidentified White House employee testified Trump telling him at the end of the day on Jan. 6.

Trump and Pence will again cross paths next week as the former president returns to the nation’s capital for the first time since leaving the White House.

Arizona considered a battleground state by some

The Arizona primary is among Trump’s last opportunities to settle scores and install allies to lead states that may prove decisive if he decides to run again in 2024. Trump and Pence were also at odds in the primary for Georgia governor, where the Pence-backed incumbent Brian Kemp easily defeated former U.S. Sen. David Perdue, who had Trump’s support.

Arizona, a longtime Republican stronghold whose move toward the center accelerated during Trump’s presidency, was central Trump’s push to remain in power despite his loss. Trump pressed state officials to block the certification of Biden’s victory and, when he failed, his allies in Congress objected to counting the state’s 11 electoral votes.

Since the election, Trump supporters have recounted ballots and analyzed vote-counting machines in an attempt to prove something was amiss.

Federal and state election officials and Trump’s own attorney general have said there is no credible evidence the election was tainted. Trump’s allegations of fraud were also roundly rejected by courts, including by judges Trump appointed.