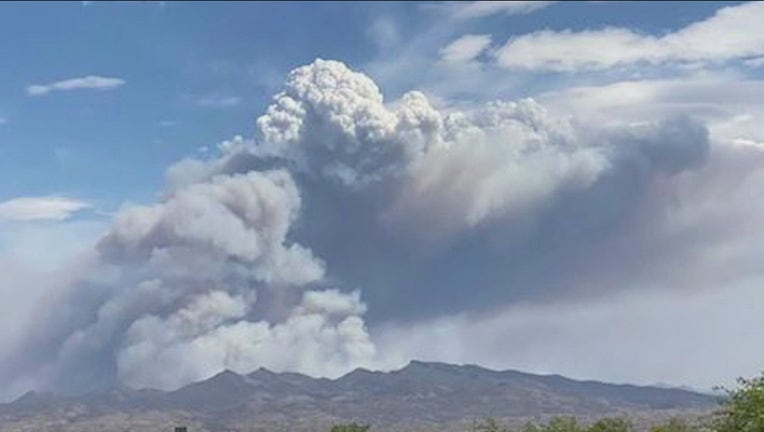 Airtankers and helicopters were assisting nearly 300 firefighters who continued to work the Mescal Fire about 12 miles (19 km) southeast of Globe.

No evacuation orders are in place for residents near the fire.

Timeline of the Mescal Fire:

The Mescal Fire is now 100% contained. It has burned 72,250 acres and its cause remains under investigation.

Containment on the Mescal Fire is now at 88%.

"There has been no increase in size for the Mescal Fire for the last four days," officials said.

The fire is now 85% contained.

"Crews on the Mescal Fire continue to monitor and patrol the fire’s perimeter and put out any hot spots near the fireline," officials said in a statement. "All major roads and highways are open. There are no communities currently in evacuation status due to the Mescal Fire."

Communities on the east side of the fire have been returned to "READY" status.

Officials announced residents of Beverly Hills and T11 Ranch areas may return to their homes but will remain under the "SET" status.

Governor Doug Ducey has issued Declarations of Emergency in response to the Mescal Fire, making $400,000 available for response efforts.

"The Declarations of Emergency will help make sure responders have the necessary resources for response and recovery – protecting people, pets & property," Ducey said in a tweet. "We will continue to work closely with local officials to ensure the needs of those communities are met."

A wildfire burning southeast of Globe has increased to 66,913 acres. It is 23% contained as of June 8.

FOX 10's Steve Nielsen has the latest on the Telegraph Fire burning near Superior.

"The fire is very visible at night as it moves down the north side of Hog Mountain. Firefighters have plans in place to prevent the fire from reaching Highway 70," stated the Southwest Incident Management Team in their latest update.

A virtual community meeting will be broadcast live on the Mescal Fire Information Facebook page at 7 p.m. on June 7.

State Route 77 has reopened between Globe and Winkelman.

Evacuation orders have been issued for the Mescal Fire, a fast-spreading wildfire burning in Gila County.

The fire, which broke out on June 1, is burning 16 miles southeast of Globe and has destroyed an estimated 49,631 acres. It has been 8% contained as of June 6.

Residents in the El Capitan area east of State Route 77 are being asked to evacuate due to the approaching flames.

Helicopters and air tankers are being used to control the Mescal Fire, which has spread onto the San Carlos Apache Reservation.

An evacuation center, which was initially set up at Lee Kornegay School in Miami, Arizona, has been moved to High Desert Middle School, located on 4000 High Desert Drive in Globe.