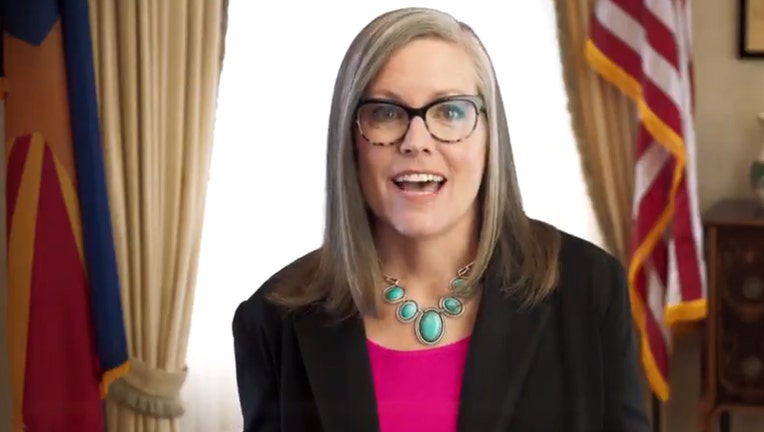 Katie Hobbs announced her candidacy for Arizona governor on June 2, 2021. "I’m running for Governor to deliver transparency, accountability, and results for Arizonans -- just like I’ve done my whole career." (Twitter.com/katiehobbs)

PHOENIX - Arizona Secretary of State Katie Hobbs announced her candidacy for the Democratic nomination for governor in 2022 while denouncing the Republican-controlled state Senate’s ongoing audit of the 2020 presidential election that has brought her national prominence.

Hobbs said in a statement she was running "to deliver transparency, accountability, and results for Arizonans" and would work as governor to "put aside our differences and work to solve the serious problems facing Arizona."

The Arizona Senate’s recount of election results and review of ballot counting machines in Maricopa County, which includes Phoenix, was launched as supporters of former President Donald Trump criticized President Joe Biden’s narrow win in the state and suggested without evidence that the election was stolen.

As the state’s chief election officer since winning office in 2018, Hobbs’ defense of the state’s election systems after the 2020 election has been broad and vocal and has included frequent appearances on national media.

She has heavily criticized the unsubstantiated allegations that Biden won in Arizona because of fraud or other problems and brought in independent observers to view the partisan recount now underway.

Hobbs also was a defendant in a series of lawsuits brought by Trump backers seeking to overturn the 2020 election results, putting her at odds with the Republican attorney general and some GOP lawmakers. The Republican-dominated state Legislature has moved to strip her of the means to defend lawsuits by removing her ability to hire outside lawyers.

"Right now, our state government is being run by conspiracy theorists who are more focused on political posturing than getting things done, and that needs to change," Hobbs said in her statement.

In a video announcing her candidacy on June 2, Hobbs ticked off a series of accomplishments as a lawmaker and as secretary of state, saying she wanted to work to make Arizonans’ lives better. She vowed to rebuild the state economy after COVID-19, invest in health care and education and ensure that all state residents have the same ability to get ahead.

Although Arizona has for been ruled by Republicans for more than a decade, Democrats made inroads in the last two elections and Biden’s presidential win was the first since Bill Clinton took Arizona in 1996.

Add another candidate in the race for governor. Secretary of State Katie Hobbs announced her candidacy for the Democratic nomination on June 2.

The state’s most recent Democratic governor was Janet Napolitano, who was elected in 2002 and again in 2006 before leaving in early 2009 after then-President Barack Obama appointed her as Homeland Security secretary.

Hobbs was a member of the state House and Senate for six years and served as minority leader of the Senate for two years before running for her current office in 2018. She was trailing on election night, but won her current post by less than 1% of the vote.

The only other Democrat in the race so far is Marco Lopez, a former mayor of the border city of Nogales, who rose rapidly to a senior position in President Barack Obama’s administration. He joined the race in March — kicking off his campaign with videos in English and Spanish that highlight his Nogales, Arizona, roots and described an Arizona he said was held back by Ducey leadership failures.

"My message is very simple — if we have healthy families, good education and quality jobs, Arizona thrives," Lopez said at the time. "Sadly, that’s not the case for many, many families in the state today."

The son of Mexican immigrants, Lopez returned to Nogales after college and was elected mayor at age 22. He went on to serve Napolitano as head of the cross-border nonprofit Arizona-Mexico Commission that promotes economic prosperity and led the Arizona Department of Commerce.