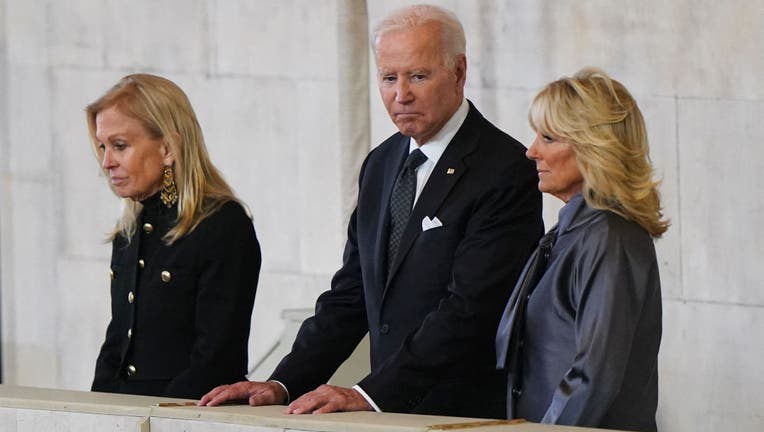 US President Joe Biden and First Lady Jill Biden pay their respects as they view the coffin of Queen Elizabeth II, as it Lies in State inside Westminster Hall, at the Palace of Westminster in London on September 18, 2022. (Photo by Joe Giddens/POOL/A

U.S. President Joe Biden paid his respects at Queen Elizabeth II's coffin on Sunday as thousands of police, hundreds of British troops and an army of officials made final preparations for the queen's state funeral — a spectacular display of national mourning that will also be the biggest gathering of world leaders for years.

People across Britain paused for a minute of silence at 8 p.m. in memory of the only monarch most have ever known. At Westminster Hall, where the queen is lying in state, the constant stream of mourners paused for 60 seconds as people observed the minute of reflection in deep silence.

In Windsor, where the queen will be laid to rest on Monday after her funeral at Westminster Abbey, rain began to fall as the crowd fell silent for the moment of reflection. The rain stopped as the crowd erupted in applause.

Biden and first lady Jill Biden were among thousands of mourners — from locals and tourists to royals and world leaders — to pay their respects. The president made the sign of the cross and put his hand to his heart as he stood quietly near the casket in the ornate 900-year-old hall with his wife and U.S. Ambassador Jane Hartley.

Biden then signed the official condolence book and attended a reception Sunday at Buckingham Palace hosted by King Charles III. He is one of 500 world leaders and royals invited to the queen's state funeral Monday, along with hundreds of dignitaries, politicians, military veterans and British charity workers.

Biden called Queen Elizabeth II "decent" and "honorable" and "all about service" as he signed the condolence book, saying his heart went out to the royal family.

"Queen Elizabeth lived her life for the people," Jill Biden wrote in a book for spouses and ambassadors. "She served with wisdom and grace. We will never forget her warmth, kindness and the conversations we shared."

RELATED: In photos: The week the royal family mourned the queen

As the dignitaries poured in, the clock was ticking down for those seeking a place in the longest queue many have ever seen to file past the queen's coffin. The miles-long queue is expected to be closed to new arrivals later Sunday so that everyone now in the line can view the coffin before Monday morning, when it will be taken to Westminster Abbey for the queen’s funeral.

Family by family, thousands of people kept lining up around the clock, braving chilly overnight temperatures and waits of up to 17 hours in a queue that stretched for over 5 miles (8 kilometers).

Lauren Wilson, a 36-year-old student, was in the much shorter queue for people with mobility issues. She said she wanted to experience in person the coffin lying in state.

"The world is in such a weird place and then this happened. It feels more momentous," she said.

She worried that the pageantry surrounding Elizabeth's death deprives the queen's relatives of the ability to come to terms with their loss.

"The family are not allowed to grieve. I find it quite heartbreaking," she said.

The queen’s eight grandchildren, led by heir to the throne Prince William, circled the coffin and stood with their heads bowed during a silent vigil on Saturday evening. 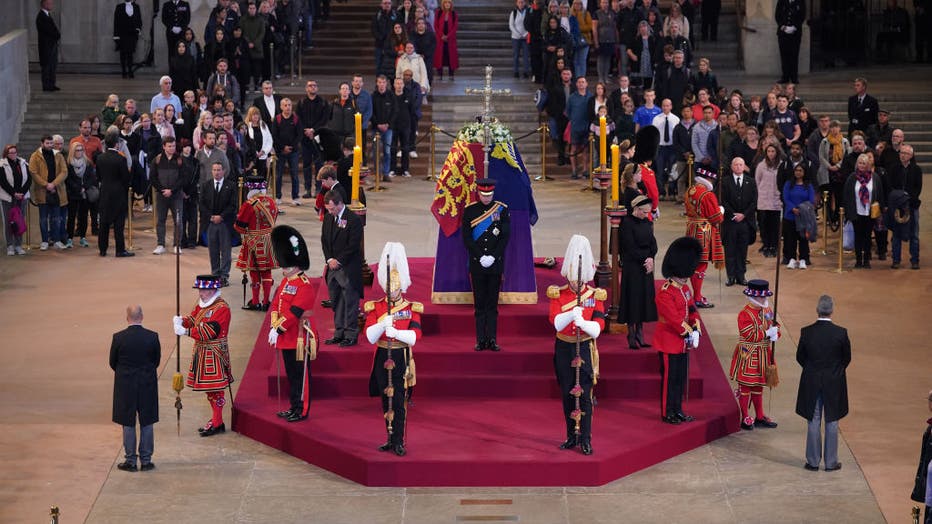 Among the foreign leaders in London was New Zealand Prime Minister Jacinda Ardern, who told the BBC she was humbled to represent her nation at the funeral and to witness the national outpouring of grief and respect for the late queen.

"The thing that I will take away from this period is just the beauty of the public’s response, the kindness that you see from members of the public, the patience, the camaraderie, that has been, for me, the most moving tribute of all, has been the public response of the British people," she said.

People across the U.K. are due to pause Sunday evening for a nationwide minute of silence to remember the queen, who died Sept. 8 at the age of 96 after 70 years on the throne. Monday has been declared a public holiday, and the funeral will be broadcast to a huge television audience and screened to crowds in parks and public spaces across the country. 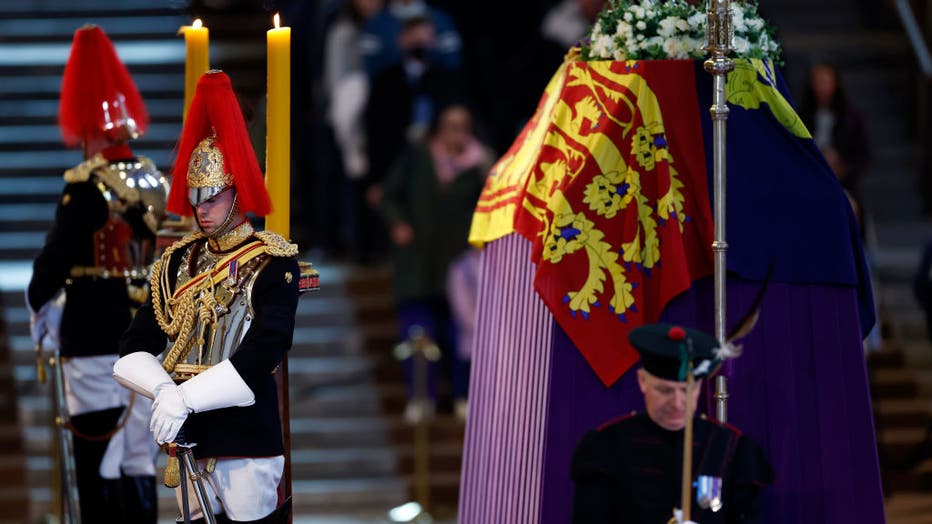 Police officers from around the country will be on duty as part of the biggest one-day policing operation in London’s history.

Crowds also gathered Sunday near Windsor Castle, where the queen will be laid to rest at a private family ceremony on Monday evening.

Steve Beeson came with his family of three and a bouquet of flowers he had purchased for the queen.

"She has been a constant steadying of the reins for the country through all of these really rough times, the least we can do is come and say ‘Thank you,’" he said.

Camilla, the new queen consort, paid tribute to the queen in a video message, saying the monarch "carved her own role" as a "solitary woman" on a world stage dominated by men.

"I will always remember her smile. That smile is unforgettable," said Camilla, who is married to Charles.

King Charles III and Prince William made a surprise visit to greet people in the queue to see the coffin of the UK’s late Queen Elizabeth II in London, England, on Saturday afternoon, September 17. (Credit: Richard Green via Storyful)

Ukraine’s first lady, Olena Zelenska, was also among mourners paying respects to the queen's coffin. British royal officials said Zelenska met with Catherine, the Princess of Wales, at Buckingham Palace on Sunday afternoon. They did not release further details. The British government has been among the strongest supporters of Ukraine since it was invaded by Russia in February.

William stood with his head bowed at the head of the coffin and Harry at the foot. Both princes, who are military veterans, were in uniform. The crowd kept slowly, silently filing past.

"You could see that they were thinking hard about their grandmother, the queen," said Ian Mockett, a civil engineer from Oxford in southern England. "It was good to see them all together as a set of grandchildren, given the things that have happened over the last few years."

The lying-in-state continues until early Monday morning, when the queen’s coffin will be moved on a gun carriage pulled by 142 Royal Navy sailors to nearby Westminster Abbey for the funeral, the finale of 10 days of national mourning for Britain’s longest-reigning monarch.

After the service Monday at the abbey, the late queen’s coffin will be transported through the historic heart of London on the state gun carriage. It will then be taken in a hearse to Windsor, where the queen will be interred alongside her late husband, Prince Philip, who died last year at 99.

"I feel so privileged to be a local resident of Windsor," she said. "I just wanted to pay my respects."

Editor's note: Pool video has since been removed from this story due to usage restrictions from the royal family.