Many have taken the time to mark the newly-recognized federal holiday of Juneteenth, with marches, parades and moments of remembrance across New York City.

NEW YORK - A six-foot statue of George Floyd, whose death at the hands of police in Minnesota last year sparked protests and a nationwide reckoning with race, has been put on display in Brooklyn.

The sculpture, the work of artist Chris Carnabuchi, was unveiled in Flatbush Saturday morning, as many across the city and region celebrate Juneteenth, a now-federally recognized holiday commemorating the emancipation of slaves in the United States.

The statue will stand at Flatbush Junction for several weeks before being moved to Union Square in Manhattan.

The unveiling comes after the city of Newark revealed its own tribute to Floyd, a 700-pound bronze statue in front of City Hall. 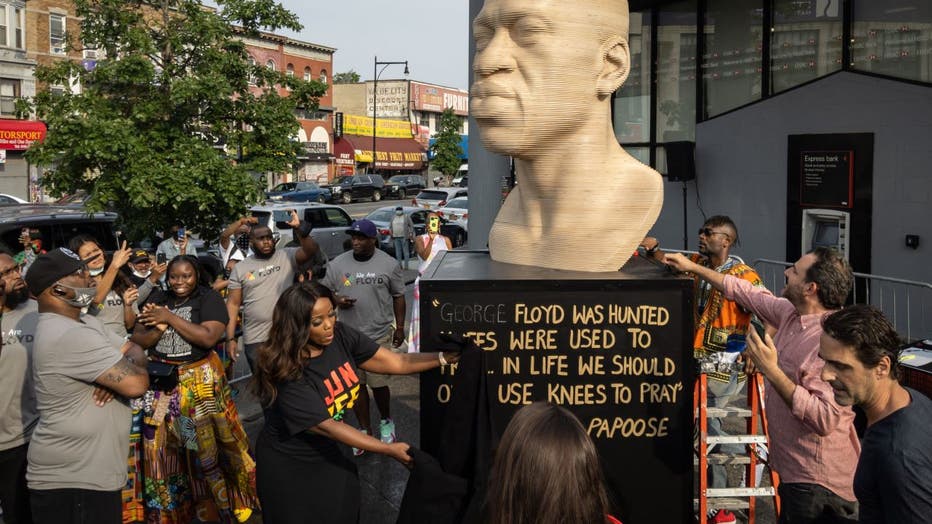 A George Floyd statue by artist Chris Carnabuci is unveiled as part of Juneteenth celebrations in Brooklyn, New York on June 19, 2021. (Photo by Ed JONES / AFP)

Juneteenth commemorates June 19, 1865, when Union soldiers brought the news of freedom to enslaved Black people in Galveston, Texas, two months after the Confederacy had surrendered. It was about 2 1/2 years after the Emancipation Proclamation freed slaves in Southern states.

Biden on Thursday signed a bill creating Juneteenth National Independence Day. Since June 19 fell on a Saturday, the government observed the holiday Friday. At least nine states have designated it in law as an official paid state holiday, all but one acting after Floyd, a Black man, was killed last year in Minneapolis.

In Galveston, the birthplace of the holiday, celebrations included the dedication of a 5,000-square-foot mural titled "Absolute Equality." Opal Lee, 94, who was at Biden's side when he signed the bill, returned to Fort Worth, Texas, to lead a 2.5-mile walk symbolizing the 2 1/2 years it took for slaves in Texas to find out they’d been freed.

Officials in Bristol, Rhode Island, unveiled a marker that describes the seaport's role in the slave trade. The marker was placed at the Linden Place Museum, a mansion built by Gen. George DeWolf, who was a slave trader. The Rhode Island Slave History Medallion organization raises public awareness about the state's role in slavery.

A street in Fort Lauderdale, Florida, was renamed Saturday for civil rights activists Harry and Harriette Moore. Harry was credited with registering more than 100,000 Black voters. They were killed on Christmas Day 1951 — their 25th wedding anniversary — when a bomb exploded under their bed.

The final scene of a movie about the couple, "The Price For Freedom," was also being shot.

"They were ordinary people who brought about extraordinary change and we are privileged to pay tribute to them here in Broward County," county Commissioner Dale V.C. Holness said before the event.

Hundreds of people gathered for a free concert in New York's Times Square organized by The Broadway League, the trade group for the Broadway entertainment industry.

A Juneteenth parade was held in Evanston, Illinois, a Chicago suburb that is using tax revenue from marijuana sales to offer housing grants to Black residents for past discrimination and the lingering effects of slavery.

Sacramento’s Black community has organized Juneteenth festivals for 20 years, and this year’s featured a parade, talent show, food fair, the reading of the Emancipation Proclamation and even a golf tournament.

"This is the first Juneteenth where it’s being recognized nationally and socially, by the masses and not just within the Black community," organizer Gary Simon said. "We’ve seen an uptick in non-Black folks coming here for the last several years, and I’m seeing the difference in just the conversations taking place today."

New York civil rights activist the Rev. Al Sharpton offered a tough message during a speech at his National Action Network, saying Senate Republicans who voted unanimously to make Juneteenth a federal holiday should also support Democratic bills that change voting laws and make it easier to crack down on rogue police officers.

In Portland, Maine, Joe Kings said his great-great-great-grandmother was enslaved. He has a picture of her on the wall of his auto detailing shop. As he has for years, Kings commemorated Juneteenth with barbecue for adults and activities for kids.

"It’s a little bit more celebratory knowing that it’s official," Kings said, referring to his annual tradition and the new holiday. "I’m not saying we were in the closet about it, but now it’s more widely recognized — and more importantly understood."