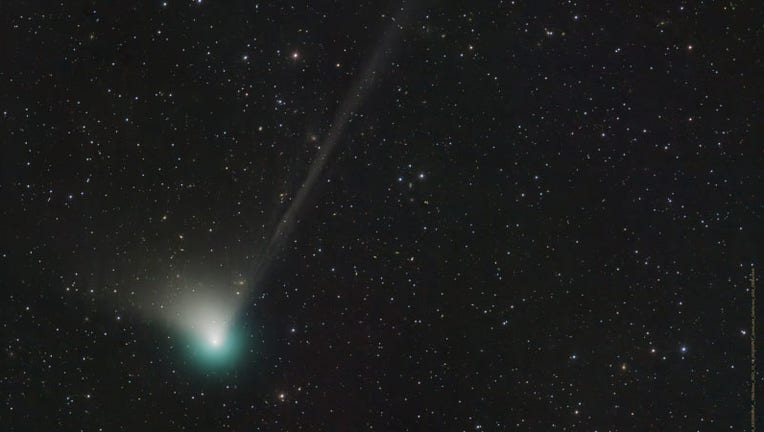 A green comet recently discovered by astronomers may become bright enough to be visible to the naked eye.

An image of the comet, known as Comet C/2022 E3 (ZTF), was published on Monday by NASA. It was first discovered in March 2022 by astronomers using the wide-field survey camera at the Zwicky Transient Facility in California, and the comet has been brightening as it approaches the sun and Earth, the space agency said.

C/2022 E3 (ZTF) will be closest to the sun on Jan. 12, "at which time it may become visible even without binoculars to northern observers with a clear and dark sky," according to NASA’s post.

"As they near the Sun, comet brightnesses are notoriously hard to predict, though," the agency added.

One photographer managed to capture a beautiful timelapse of the comet over the city of Exeter, in the southwest of England.

NASA's Jet Propulsion Labs says the comet has an orbital period of about 50,000 years, meaning the last time C/2022 E3 (ZTF) came so close to Earth was during the last ice age.

C/2022 E3 (ZTF) is expected to reach its perigee, or pass nearest to the Earth, on Feb. 1, after which "it should dim dramatically," NASA said.

In a photo shared on Monday, three blue ion tails extend to the upper right of the image, which NASA said is likely the result of a variable solar wind on ions ejected by the icy comet nucleus. 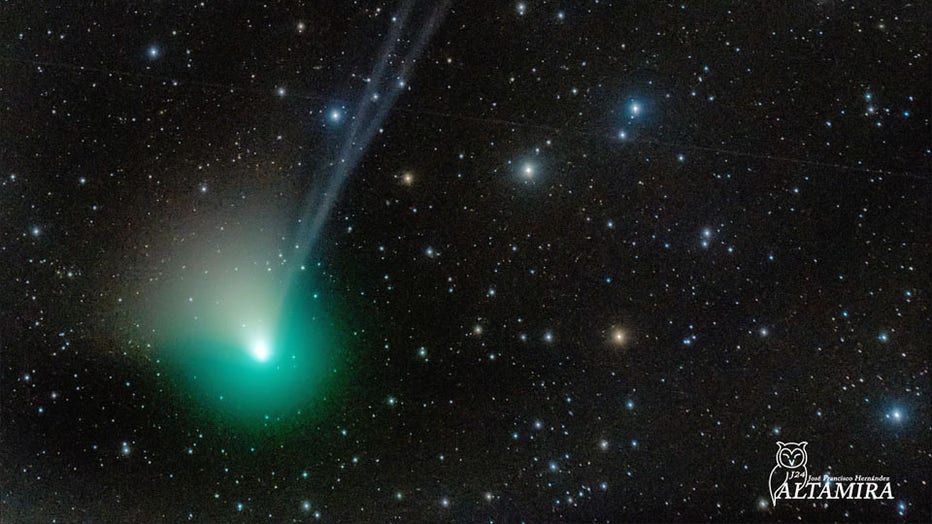 Tails of Comet ZTF are pictured in a photo published on Jan. 9, 2023. (Credit: NASA/Jose Francisco Hernández)

"The comet's white dust tail is visible to the upper left and much shorter. The green glow is the comet's coma, caused by glowing carbon gas," NASA said in the post.

Observers in the Northern Hemisphere may be able to spot C/2022 E3 (ZTF) in the morning sky throughout the month of January as it moves to the northwest, according to Space.com.

The new moon phase — or when the moon is completely dark — occurs on Jan. 21 and could help provide the necessary dark skies needed to see C/2022 E3 (ZTF), Space.com said.

Specifically, on Jan. 12, EarthSky advises individuals to look low on the northeastern horizon just before midnight — nothing that the comet will be rising between Boötes and Hercules.

The comet will become visible for skywatchers in the Southern Hemisphere in early February 2023, the space outlets reported.

RELATED: Celestial events to look out for in 2023