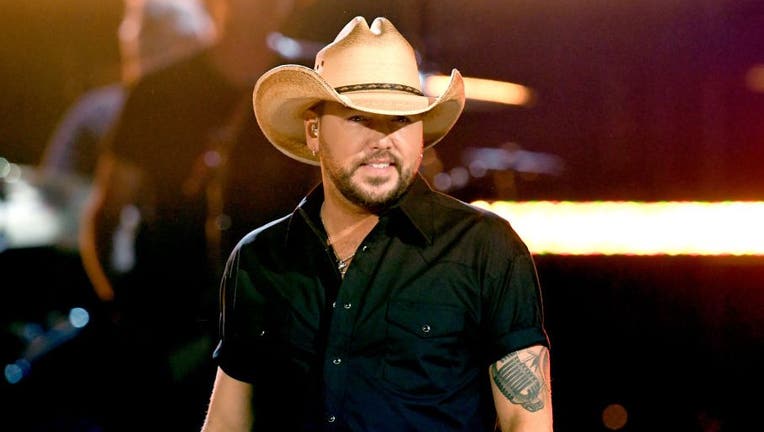 Jason Aldean spoke out against California Gov. Gavin Newsom’s COVID-19 vaccine mandate, which requires students to get the jab in order to attend school in the state.

On Sunday, the country singer, who has been in the spotlight lately for he and his wife’s critical opinions of the Biden administration, shared an image of a headline highlighting the mandate in California and denounced it in a caption on Instagram.

"So let me get this straight! It is no longer our decisions as parents (or free Americans) to make decisions about our kids, Gavin Newsom makes those decisions for us now??" Aldean wrote. "You gotta be kidding me! People in California should be outraged and people everywhere else better start standing up and speaking out NOW. This is not how America and being free works."

California on Friday became the first in the nation to announce to require eligible students to be vaccinated for in-person learning.

Per Newsom’s decision, California will now be the first state in the U.S. to require a COVID-19 vaccination for students older than 12 if they want to attend class in person. Essentially, the move adds the COVID-19 vaccine to the list of required vaccinations that school children are already subject to. The vaccine requirement would be enforced after the Food and Drug Administration (FDA) gives its approval for different age groups to receive the shot while still allowing for religious and medical exemptions.

New York City also recently established a vaccine mandate for teachers in the Big Apple, prompting a group of teachers to petition the U.S. Supreme Court to block the city's mandate.

Aldean’s criticism of Newsom's order comes days after he said he will not apologize for his political beliefs after previously defending his wife for dressing their children in anti-Biden merchandise.

"I will never apologize for my beliefs or my love for my family and country," Aldean said in a recent post.

"This is the greatest country in the world and I want to keep it that way," the crooner added with the hashtag #unapologetic.

Aldean included a photo of himself performing on stage in front of a giant screen illuminated with the American flag. It was a shot from his Thursday night performance in Phoenix, Arizona, during his "Back in the Saddle Tour." His special guests were Hardy and Lainey Wilson.

Aldean and wife Brittany have made a point to be more politically outspoken in recent months.

Brittany previously caught backlash around the time of the 2020 election when Trump was erroneously questioning the results. At the time, she took to Instagram to sport a sweatshirt that said "STILL MY PRESIDENT," prompting criticism from those on the left who believed she was promoting misinformation about the results.

She followed that up with a note explaining that the backlash on her page led many to privately message her their support for Trump. She elaborated on that further in a social media Q&A in which she noted that her political social media presence gets a lot of public backlash, but she’s spurred on by the private messages of support she gets from people too afraid to profess their right-leaning beliefs publicly.

"I personally don't give a d--- if people don't agree with me. I think it's important now more than ever to stand for what you believe, even if it 'goes against the grain.' Do your research and form your own opinion — speak out if you wish. But most importantly, don't bully people who feel differently than you," she said at the time.

Get updates to this story from FOX News.