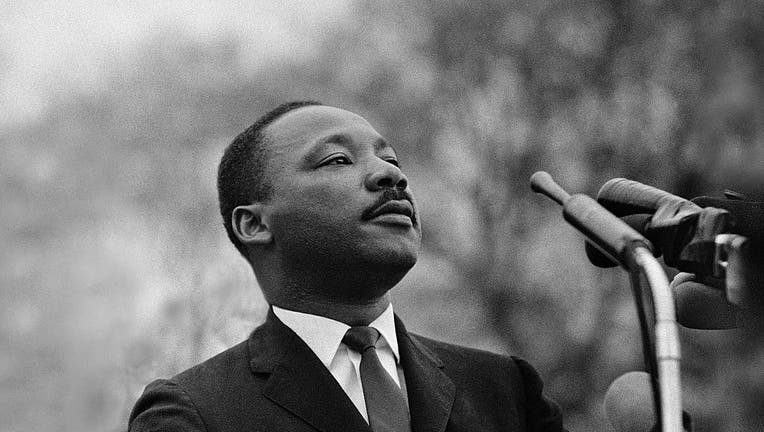 Atlanta is known as the home of prolific civil rights icon and the annual event features discussions and events for adults and kids the entire week leading up to the official holiday on Jan. 17.

Here's everything you need to know to participate in this year's event:

When and where is the King Holiday Observance?

The observance begins Jan. 10 and continues through Jan. 17. This year's observance is centered around several mostly virtual events.

There's an in-person rally and march on Jan. 17 in Downtown Atlanta.

What is the theme of the King Center MLK Day Observance?

The theme of this year's observance is, "It Starts with Me: Shifting Priorities to Create the Beloved Community."

"It is a necessary, multi-faceted shift that includes shifting our values to align with a revolution of values; shifting our mindset to understand that we are interconnected, interrelated and interdependent and to engage each other and Earth accordingly; and shifting our society from being "thing"-oriented to being "person"-oriented, which will cause us to engage technology with moral responsibility, so that advancing the artificial is not prioritized over the well-being of the authentic," Dr. Bernice A. King wrote in a statement. "I have deep faith that, if we shift priorities in the ways that my father described in ‘The World House’ chapter of his last book, Where Do We Go From Here: Chaos or Community?, we can create this Beloved Community across the globe and ensure that people have the freedom to participate in government; freedom to prosper in life; and freedom to peacefully co-exist in Community. It starts with me. It starts with each of us."

Who are the guests at the King Center MLK event?

Several people and organizations will be recognized at this year's awards gala:

The award ceremony is hosted by actor Lamman Rucker and MIchelle Williams of Destiny's Child. There will be musical performances by singers, Kameron Corvet, Luke Whitney, Keke Wyatt, and violinist, Ken Ford.

Several public figures will provide remarks during the Jan. 17 commemorative service, including:

Dr. Jill Biden will be in attendance for the ceremonies, according to the King Center. Further information about the First Lady's participation is forthcoming.

What are this year's events?

Registration is $129 for the series and is available online.

The series will connect how Dr. Martin Luther King's six principles and steps of nonviolence can create a cultural shift.

The event is followed by the 2nd Annual Beloved Community Global Summit on Jan. 13 and 14. The virtual event is free, but viewers are encouraged to register online.

There is a youth summit for middle and high school students from 5 p.m. to 6:30 p.m. on Jan. 14. It's led by a panel of youth activists and explores how kids and teens can influence each other, their peers and families to promote equity.

Dr. Bernice A. King and Kimberly P. Johnson will read their book "It Starts with ME!" along with Meeka the Bunny from the Center for Puppetry Arts on Jan. 15 at 10 a.m.. The focus is on teaching children how to allow love to drive their behavior.

Masks are required at the event.

The headline commemorative service will broadcast live on FOX 5 Atlanta from 10 a.m. to 1 p.m. on Jan. 17.

The event includes remarks and greetings from public figures in Atlanta and Georgia as well as activists and leaders of organizations that prioritize social justice.

The service will also include a critical conversation titled, "Faith and Reconciliation." There will be several musical performances.

Marchers will assemble at 1:30 p.m. for a 1:45 p.m. march at Baker and Peachtree Street in downtown Atlanta.

Interested participants must register at www.mlkmarchcommittee.com for a street assignment.

Martin Luther King, Jr. was 35 years old when he became the youngest person to win the Nobel Peace Prize in 1964.

When did Dr. Martin Luther King deliver his famous ‘I Have a Dream' speech?

King delivered that speech during the March on Washington in 1963.

The march was organized in support of the Civil Rights Act, which made segregation, "Jim Crow Laws" and discrimination based on race, religion, gender or nationality illegal.

King died on April 4th, 1968, in Memphis, Tennessee, when he was shot at the Lorraine Motel.

King's funeral was held in his hometown of Atlanta.

The King family has asserted the civil rights leader's assassination was part of a conspiracy involving the federal government and organized crime. A committee determined James Earl Ray was the assassin of Dr. King.